Some characters I'd like to see in the Marvel's Avengers game

It's no secret that I hate list articles and love The Avengers, so it was quite a internal struggle for me to decide whether or no to write this. That said, I must admit the Marvel's Avengers game is far from perfect. In fact, it's downright mediocre. For a more in depth look at why I say that you can read my review of the game here. While the game isn't the best, o am having fun playing it and started to let my mind wonder with the possibilities of future heroes. We already know that both Hawkeye's and Spider-Man will be added to the game, so I won't be talking about them. We can also be sure that characters like Ant-Man and Captain Marvel, due to their appearances in the MCU, will be in the game. So, I want to focus on some oddball, out of left field characters that could be very fun to play and not break the game too much. I will also be sticking to characters that have been part of the Avengers in the main 616 comic universe. So, in no particular order, here are 5 Characters I'd like to see in the Marvel's Avengers game. 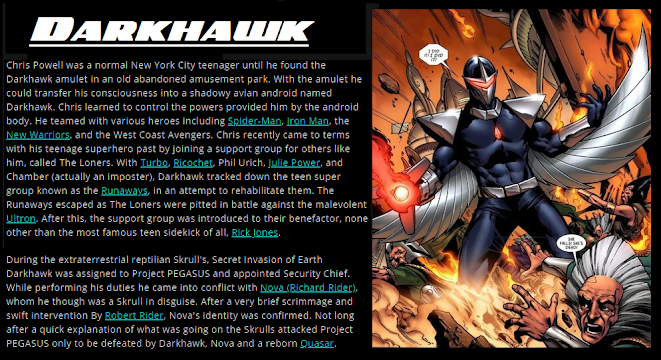 Darkhawk is a product of the attempt by Marvel to create a new teen sensation in the 90's. Unlike Sleepwalker and Slapstick, Darkhawk teamed up with Spidey in his second issue and has been a character that Marvel has tried to make work several times since his debut. As the game already told us that A.I.M. was looking to harness cosmic power, it would be lore friendly to have the Darkhawk amulet accidently summoned to Earth and picked up by our hero before he joined the team. That said, Darkhawk can fly but initially he could only glide and I think that would be a fun mechanic to bring to Marvel's Avengers. Additionally his grappling hook could help him reach high ledges much like Black Widow's so he would be something in between a flyer and a climber character. Give him some gear with cosmic elemental properties and a few laser beam attacks and he would certainly be a perfect Iron Man/Black Widow hybrid. 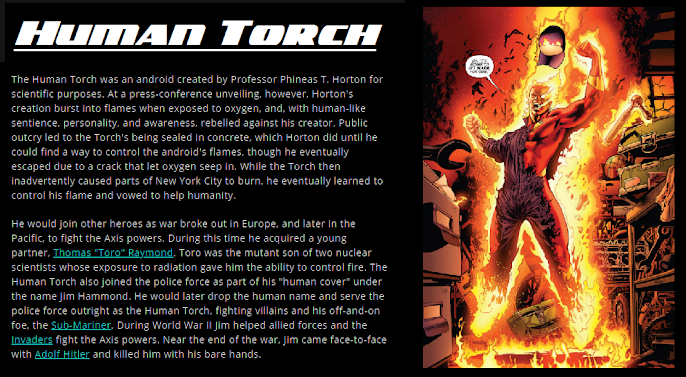 Jim Hammond is the original Human Torch and he fought alongside Captain America during WWII. After the war his body was said to have been used to create the original Vision synthezoid but that has been retconned to hell and back. At one point a character named Immortus made a time clone of his body and THAT was used to create the Vision. Regardless of his comic book history, his in game history could be a rogue A.I.M. sybthezoid that joins the Avengers. There are already enemy synthezoids that use plasma/fire based attacks, so it wouldn't stretch the game lore one bit. With plasma/fire based attacks, the ability to fly, and moves that would set the surrounding area on fire, the Human Torch could be a great area of effect character that Marvel's Avengers needs. 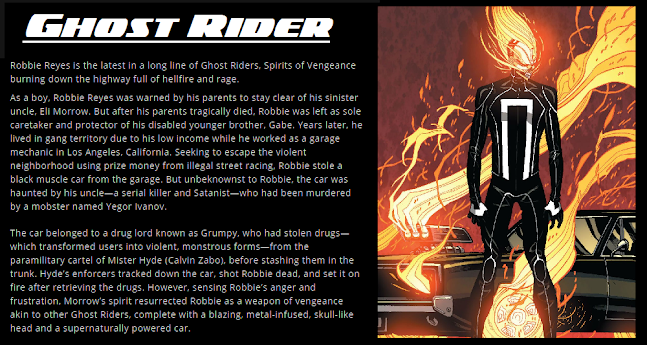 While Robbie Reyes is not the original Ghost Rider, he is the one to have membership in the Avengers. It wouldn't be too far-fetched to say A.I.M. was researching the occult and summoned the spirit of vengeance Zarathos(I know Robbie isn't possessed by Zarathos in the comics but I don't thin adding Satanist to the game would be wise.) to the game's universe. From there the Avengers could find themselves too late to stop it from choosing a host but in a twist, Ghost Rider joins the Avengers instead of fights them. Ghost Rider is an odd fit for the game as his fiery car would not work as an in game mechanic but it might be suitable for one of his specials, maybe as a phantom car that burts onto the scene and runs over enemies before disappearing. His dual chains could make Ghost Rider a combo machine and add another non brute fighter to the game. 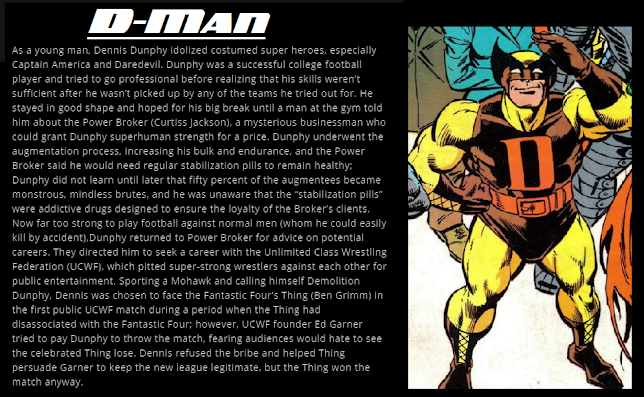 D-Man isn't a very well know character but I just love his outfit as it is a combination of Daredevil and Wolverine. D-Man's in game origin could easily mirror his Marvel comics one, with a Power Broker character giving abilities to humans who wish they were like the Inhumans that inhabit the world after A-Day. A pure brawler, D-Man could bring some grappling to the game with wrestling moves and holds. Give him the ability to grapple any enemy but limit him to one at a time and D-Man would make a unique addition to any group. He could also be the first character to lack a ranged attack, instead having grapples, and would require the player to have a strong grasp of dodging to get close enough to defeat the enemies in the game. 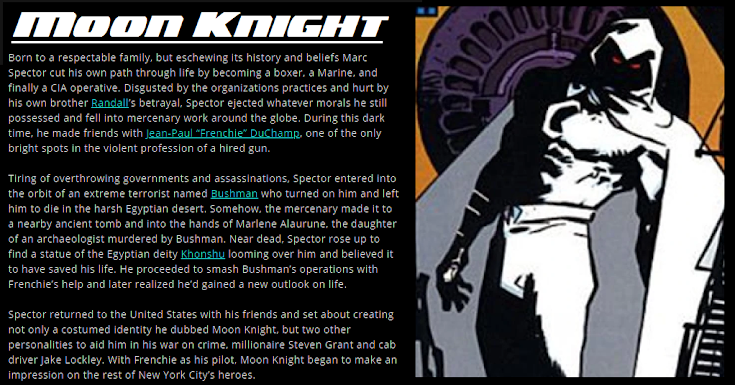 Moon Knight has been called Marvel's Batman and in a lot of ways that moniker fits. Moon Knight is rich, has a cape, fights crime, and refuses to kill...unless he doesn't. It's complicated because Moon Knight has multiple personalities. This could be played up as the in game reason Moon Knight started fighting crime, with one of his personalities believing he is an Inhuman. With his range of gadgets, Moon Knight could be a quirky character that is a jack of all trades but master of none type. You might even be able to add his multiple personalities into his moveset with his specials all calling on a different personality with unique temporary looks for each one.
Well, there you have it. Some characters I'd like to see in Marvel's Avengers game. Do you agree that these characters would be fun to play? Do you have any characters you want to see in the game? Leave a comment below and let us know. Also, be sure to follow us on Twitter for all the shit post and latest news. Meanwhile our YouTube channel has the latest game trailers as well as my hot takes and rants.