Back in the day, we all grew up with a plethora of run & gun games such as the renowned Contra series, Super Turrican 2, Gunstar Heroes, and Alien Soldier. All of these games were a bit difficult to finish on the first attempt, but after many deaths, players eventually managed to reach the credit scene. There’s one franchise that shares a variety of features with all the games mentioned yet it manages to still stnd out. The franchise I’m talking about is Metal Slug.
Personally, I believe Metal Slug was SNK’s answer to Konami’s Contra series as they both share pretty much the same concept and the overall chaotic atmosphere. Aliens attacked planet earth and it’s your job to defend the human race ( if there’s any left, of course). And because I adore this franchise, I made a list of games similar to Metal Slug. I’m confident this list will peak your interest as it contains some great titles. 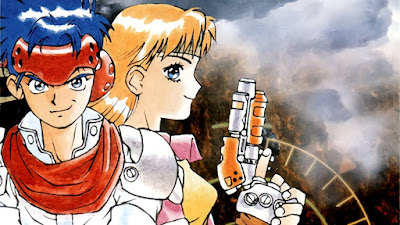 Rapid Reload
The first game on the list is Rapid Reload or Gunners Heaven a it's known in Japan. It's a run & gun game released back in 1995 on the original PlayStation. Rapid Reload is often compared to the Treasure game Gunstar Heroes. However, that doesn't mean the game doesn't play similarly to the Metal Slug franchise.
The story puts you in the shoes of one of the adventurers, Rita or Axel, who embarks on an epic journey to find the legendary stone. A terrorist organization known by the name of the Pumpkin Heads will stand in their way as they're also seeking to use the legendary stone to achieve their heinous plans. 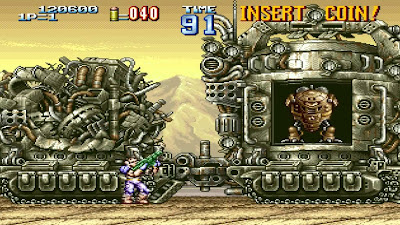 Gunforce II
Gunforce II is the sequel to the original Gunforce game released originally on the SNES and the Arcade back in 1991. Gunforce II was released exclusively in the arcade back in 1994. What a lot of gamers are not aware of is the fact that Gunforce II was actually developed by former employees who worked on SNK's masterpiece games in the Metal Slug franchise. Gunforce II is seen as a spiritual successor to the Metal Slug series since it incorporates pretty much the same gameplay elements and the epic atmosphere. Additionally, the game is sometimes referred to as Metal Slug Zero.
In the game, you take on the role of Lei or Max as they battle their way through a couple of stages blasting enemies left and right. At the end of each level, players will be obliged to defeat a boss in order to progress to the next stage. Just like any similar game to the Metal Slug franchise, expect to die a couple of times in the game before you get used to the difficulty.
In the end, if you're a die-hard Metal Slug fan and looking for something similar, Gunforce II is your best choice. 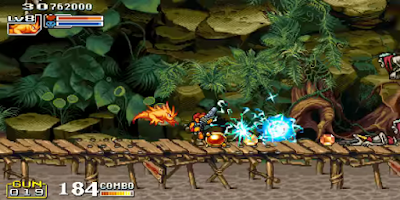 Demon Front
Demon Front is the ultimate definition of a clone that copycats everything from your favorite game. It has nearly everything you would expect from a Metal Slug game, but it lacks several features like the ability to control vehicles which the Metal Slug franchise is known for. The latter was developed and published by IGS, known for games such as Knights of Valour 2, Martial Masters, and Bee Storm: Do DonPachi II.
It's true that I claimed the fact Demon Front is a clone of Metal Slug, however it manages to set itself apart from being a mere clone that brings nothing new to the table. It includes some unique features which I personally find pretty interesting. For example, each of the four characters brings along a pet. This pet can be used to attack enemies or used as a shield to protect the player from projectiles. Moreover, you have four players to choose from, but all of them share the same story with the same outcome.
If you're looking for a fun clone to the Metal Slug series, I would gladly recommend Demon Front. Bear in mind that the game is quite short when compared to Gunforce II for example. 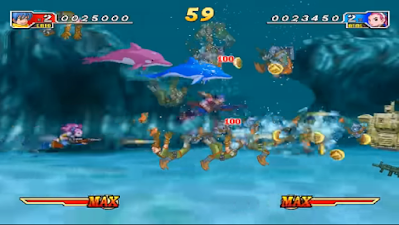 Dolphin Blue
The fourth game on the list is Dolphin Blue. Similar to Gunforce, the latter was also developed by former employees who worked on the Metal Slug franchise. This just shows you how of a big impact the series has had on the developers, and how it nudged them to make two spiritual successors to the Metal Slug franchise.
Dolphin Blue was actually released only on the Atomiswave arcade system back in 2006. It was until 2020 that the game would be hacked so that it would run on the Sega Dreamcast.
The game's story casts you in the role of either Anne or Erio as they battle a horde of enemies standing in their way. Their goal is to rescue princess Annette who was kidnapped after having an extensive knowledge about the "Blue Tear". 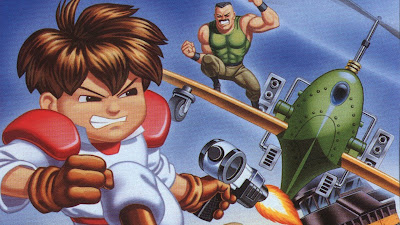 Gunstar Heroes
Gunstar Heroes is a timeless classic that is often visited by Contra fans who are looking for non-stop action where your job is to blast anything that moves. Gunstar Heroes is one of the best games ever made on the Sega Genesis and one of Treasure's best titles among other games such as Sin & Punishment.
The game's story centers around a bunch of characters named the "Gunstars" who will do the impossible to stop the evil empire from acquiring the four gems that are said to bring immense power to those who manage to collect all of them.
Seriously, if you're a die-hard fan of the Metal Slug game, and looking for something similar to the chaotic feel, go for this one. 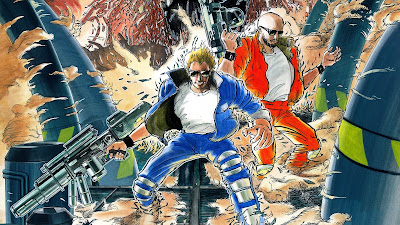 Cyber-Lip
Cyber-Lip is a horizontally scrolling, side-view platformer shoot 'em up that seems to have taken an abundance of inspiration from the likes of the Contra series which is totally apparent from the gameplay, and even the music itself. Oh, and the box cover looks sick by the way.
The story of Cyber-Lip takes place between the year 2016 and 2030 where the humankind has managed to develop very powerful, and intelligent androids capable of greater things. However, after a couple of years, the androids became defective and so they teamed up with the aliens to cause havoc and destruction on planet earth. The government had no choice but to call upon two of the military's best veteran androids Rick and Brook who will do everything at their disposal to repel the menacing danger.

Journey to Silius
Finishing the list with one of the best games made by Sunsoft in my opinion. Soundtrack-wise this one is a blast. I mean you cannot stumble across a Sunsoft game without dancing with the beats, right?
Journey to Silius is a run & gun similar to the other mentioned games above released on the Nintendo Entertainment System back in 1990. Before you attempt to set foot into the game, I should warn you that Journey to Silius isn't a piece of cake. So, be ready to die a couple of times before you get hang of it.
The game was originally based on the 1984 film The Terminator however, the licensing rights to the film were lost during early development stage. As a result, the graphics and the plot were altered to accommodate this change.