Visual Novels come in different flavors, as they are some of the cheapest games that are made. Favorite among the indie community, visual novels also have a pretty huge sub-genre, and that is adult-oriented visual novels.
Now, you may be thinking, hey why are you reviewing an adult visual novel, where is the good stuff? While it is true, that adult visual novel are made with one specific goal in mind, there are still some of them that stand out.
Callisto, an adult sci-fi visual novel, developed by Xavster Gaming can be deceiving at first, but there is so much more to it than just the naughty bits.
You play as a dishonorably discharged officer (default name John), that is barely scraping by and wallowing in self-pity. Waking after a nasty hangover, John seeing that he has hit rock bottom, and decides to get back out there. Since he doesn’t want to rejoin the military, he opts for the private sector. Striking a deal, with a shady club owner to transport some goods, he becomes the captain of the freighter “Callisto”. Becoming the captain, he makes an unexpected ally in one of the club girls, Tanya, who quickly becomes part of his crew. The two of them, start doing several cargo runs until they are asked to make a risky run, no questions asked. All of this is explained in the prologue, which you can access at any time during the game, from your office.

This is where the real adventure begins, and where Callisto really begins to shine.
Playing this, it may seem like just another novel where you are on a spaceship full of women, and while this is true, the game has much more depth. One of the first things that you will notice, is the character depth. Nearly all of the characters are extremely well fleshed out, and you will learn more about them as the story progresses. All of the members of your crew have their own goals, motives, and reasons for joining you, and it isn't just randomly tacked on.
You also need to keep the ship running, and that requires money, which can be made either by trading or scavenging. Trading can be best by simply buying low and selling high, while scavenging gives you several choices. The profit from scavenging can vary, but you can choose which ship you want to scavenge, and what part of the ship (usually between, bridge, hold, etc.). There are three sectors that you can visit: Pleiades Cluster (where you start the game), Beehive Cluster, and Orion Nebula. Each sector has a purpose, Pleiades Cluster is your home, Beehive Cluster is where you can scavenge, and Orion is an excellent trading hub. 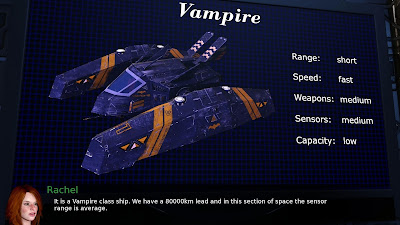 The other surprising fact about Callisto is the sci-fi elements. While they can be easily discarded in a game of this type, the developers really put the effort to make the story more believable. Some of the explanations concerning the more technical stuff are explained in detail and you can see the effort and care that went into these details. As the story progresses, you will be thrust into an uneasy political situation, which is also very well written.
But, what would an adult game be without the naughty scenes, and there are plenty of them. There are seven girls onboard Callisto, that you can choose to pursue. Once you build a solid relationship with one of them, you can have “quality time” with them.
During “quality time”, you can choose from a variety of positions, and whether your partner stays the night or not. What’s surprising for this genre of visual novels, is that these scenes are completely skippable, just in case you want to focus on the story.
While this is a visual novel, all of the characters are rendered in 3D in great detail, and with very good animation as well. There is a good mix of music, which varies from classical, ambient, and even some pop tunes.
While Callisto is currently still in development (as of this writing, version 0.90b has been released to Patreon backers), it’s one of the sci-fi novels that you shouldn’t miss out on. Playing through it, you will have the feeling of watching a good sci-fi show (maybe with some B-level acting :D), and the adult content really spices the game up.
The game isn’t on any of the main stores (Steam, itch.io), and is only available to Patreon backers.  Additionally, you can follow its progress on Twitter and Discord. For a sci-fi adult visual novel, Callisto can be easily discarded, but if you opt to try it, you’ll be in for a pleasant surprise.

NOTE: The reviewer is also the backer of this game.