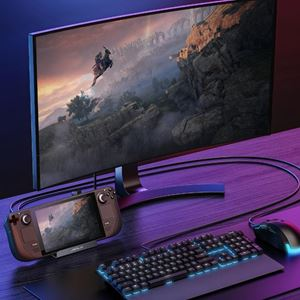 JSAUX UNVEILS A NEW M.2 SSD DOCKING STATION FOR STEAM DECK, NOW AVAILABLE!
Players will be able to store games and their save files in the dock as if it was an external storage device
Tech manufacturer JSAUX announces that its upcoming generation of Steam Deck Docking Stations is available and ready to order. The HB0604 Docking Station features an M.2 SSD slot that will allow players to upgrade the Deck's storage by attaching an external storage unit (not included with the dock). This way, players can expand their library when playing games on a big screen, especially AAA titles that tend to grab a significant chunk of the Deck's storage. This new Docking Station will be on sale on September 7 at 7am PST for a special $99 early bird price for the first 100 orders. After that, next orders will be priced at $129. JSAUX is also offering two bundled M.2 Docks with a 1TB SSD and a 2TB SSD storage card. The Dock + 1TB SSD storage card will have an early bird price of $169 for the first 50 units (after that, it will be sold at $199), the Dock + 2TB SSD storage card will have an early bird price of $239 for the first 50 units (after that, it will be priced at $269). All customers will get a complimentary portable stand for the Deck (while supplies last), a skin and a keycap with their orders.
Besides the M.2 SSD slot, that supports NVMe and SATA with a 900MB/s data transfer, the docking Station features a 4K@60Hz  / 2K@120Hz HDMI 2.0 port, 2 USB-A 3.1 ports, 1 Gigabit Ethernet port as well as a USB-C port for power input that allows charging at 100W, letting the Steam Deck fully recharge while plugged in. The units bundled with SSD storage will feature M.2 2280 units, featuring PCIe Gen 3 8GT/s interface, up to 4 lanes. The SSDs are compliant with NVMe Express Revision 1.4 and support host memory buffer. Both the 1TB and the 2TB units offer up to 3300MB/s read speeds and up to 2600MB/s write speeds.
HB0604 Docking Station (M.2 SSD) review units are available. Ask us for yours!
This Docking Station is the third product in this category researched and manufactured for JSAUX in just a few months. After the well-received first generation of the gadget, the R&D team at the Chinese manufacturer has worked to offer incremental upgrades to its flagship product. All its Docking Stations are compatible with iPads and Android phones with USB-C ports. JSAUX also plans to unveil new products for Apple and Oculus devices that will be available between September and October.
KEY FEATURES
HB0604 Docking Station (M.2 SSD) for Steam Deck