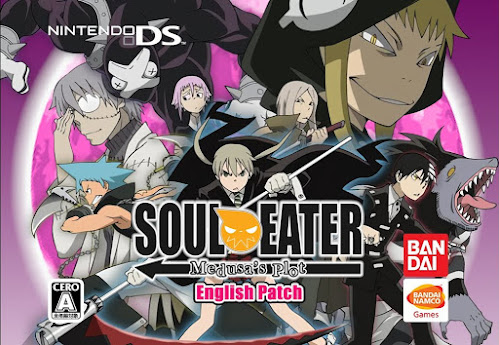 After I have written a review about Soul Eater: Battle Resonance, it's time to take a look at this one too. Just like the previous game, this one is a spin-off to the original anime which adapts the first half of the show with few changes to the overall plot of course.
Soul Eater: Medusa's Plot (ソウルイーター メデューサの陰謀, Sōru Ītā Medyūsa no Inbō?) is an action game produced by Namco Bandai Games for the Nintendo DS and was released on October 23, 2008.  The game was developed by Eighting Co., Ltd. Known for games such as Tatsunoko vs. Capcom: Ultimate All-Stars, Naruto: Clash of Ninja Revolution 2, Castlevania: Judgement and other games.

Unlike Battle Resonance, the characters are chibi-like. I think this adds a cute look and tone to the overall game in my opinion. This direction might remind some of The Legend of Zelda games on the DS, but after all, that's just my own opinion.
The plot of the game revolves once again around the three main protagonists, Maka Albarn , Death the Kid and Black Star. Those three will team up once again to tear Medusa's wicked plans to resurrect the Kishin Asura from his slumber.

Gameplay-wise, players fight their foes from an isometric perspective on the bottom screen while taking control of the three meisters specified above. These characters can be switched at any time during the playthrough with a touch on the screen.
In order to use several moves, you'll need to tap or swipe using the touchscreen.  This technique can allow you to execute different moves. For example, deflecting your enemies' beam attacks, switch between characters, execute combos and so on.
Unfortunately, you'll have to use the stylus accurately as sometimes the game fails to do the techniques cited above. Other than that, the game shouldn't be that difficult to get used to. Another issue is how the game throws waves after waves of dialogue at your face. It could have been better if they made those dialogues into a number of cutscenes, but I can understand that this is a mere budget title nothing else. And maybe the handheld wouldn't have been able to handle that in the first place. 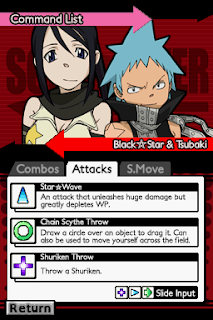 Luckily, for those who enjoy hunting Japanese imports, you can finally play this one with English subtitles using an English patch. This will make things far easier for you rather than scrubbing your head for ages to find out what in Hades name should you do. This English patch can be easily obtained, and it works wonderfully with a DS emulator.  But if you hate emulation, you can head straight to either Amazon or eBay. I pray that you will stumble across a cheap copy, dear reader. (wink) 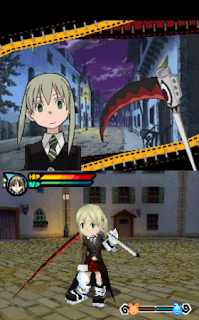 So, is this game recommended? Well, you see, if you are looking for something  mind-blowing, I guess you should just skip this one. While the game borrows certain elements from the anime, several issues push the game to turn off a lot of players especially those expecting something similar to the likes of The Legend of Zelda: Phantom Hourglass or Spirit Tracks. But one has to admit that this little budget title tried to be different despite the handheld's capabilities.
As a conclusion, if you're a gamer who enjoys digging Japanese imports or any obscure game, I guarantee you this one might please you specially if you are a die-hard Soul Eater fan. While it didn't please me at least,who knows, it might please you!