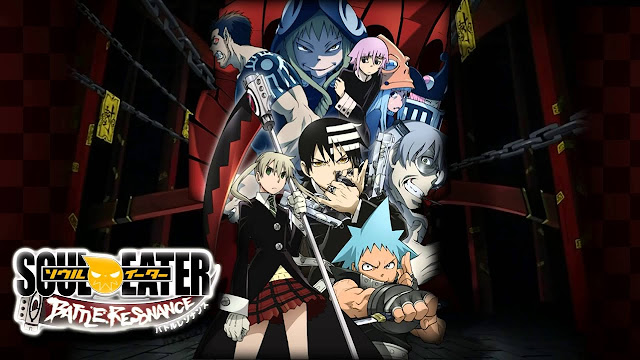 It seems that back in the ’90s and the 2000s, making an edgy show with an overpowered protagonist was the norm. We had Anime shows like Bleach, Yu Yu Hakusho, and Hunter x Hunter (1999) in which the protagonist will keep getting stronger and stronger until the antagonist starts questioning his existence. Was he only created by the author so that the hero will wipe the floor with him? Who knows.
Among these edgy Anime is Soul Eater. An anime series, also a manga written and illustrated by Atsushi Ōkubo, that first began airing in 2004 to 2013. Now, in case if you are not familiar with the story, it is set in '' Shibusen'', a school for weapon and meisters to learn various things.
The overall series revolves around three main characters, Maka, Black Star, and Death the Kid. Three weapon meisters that control weapons which can transform into a humanoid.  Their objective is to collect 99 souls and one witch, in that particular order, otherwise, they'll have to start all over again. Amidst their quest to gather the souls, several powerful villains will stand in their ways Just like any shônen anime out there.

Soul Eater was trending for a while among other shows of the same genre.  This pushed Namco Bandai to release a video game of the show back in 2009 for the PSP and PS2 exclusively in Japan.  Soul Eater: Battle Resonance was developed by Bec. The aforementioned is known for games such as the Digimon World Series, several Dragon Ball games,  Ultraman: Towards the future for the SNES, and several other anime games that are worth checking out.

The entire game is written in Japanese, so it's challenging to grasp anything off the story if you can't read the language. I managed to comprehend a tiny bit towards the end. Although I haven't finished the game yet (I suck at fighting games), but I can certainly tell the story revolves around Medusa and her crew. In case you don't know what I'm talking about, Medusa is the first villain revealed in both the manga and the anime. 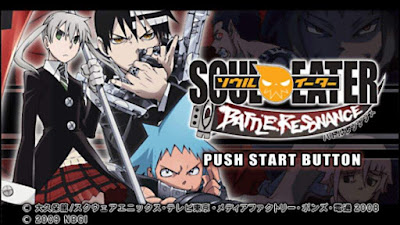 Now when it comes to the gameplay, Soul Eater: Battle Resonance doesn't have anything very unique that will blow you away. At first glance, it's noticeable that the game is a mere low-budget title or a fan service nothing more. Just like many 2D fighting game out there, the game has 4 modes. The main mode which lets you select one of the main three protagonists along with their weapons. You'll have to fight other characters from the anime, and at times, you'll be forced to fight against your clone while following certain objectives, or else, you'll be stuck forever. The other modes include versus mode, arcade mode, and team battle. Sadly, the game doesn't have any tutorial. Thankfully, you can adjust the CPU difficulty to zero so you can wipe the floor with your opponent without getting hurt. 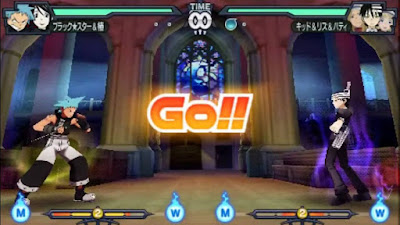 Digging deep into the gameplay, the fighting mechanics are pretty basic. It might remind some of the previous Shônen fighting games like Bleach: Heat the Soul or Naruto Shippuden: Ultimate Ninja series.  You attack using the circle, triangle, and square button. By using these ones after another, you can pull off a combination of different combos. If you get the hang of it, you can also pull off a powerful attack that blasts your opponent to shreds. 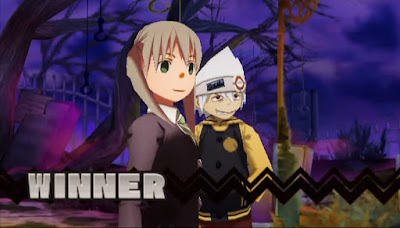 Graphically, the game is a full cel-shaded game that captures the feel of the anime. The environments are pretty nice since they catch the anime background. Despite all of this, the game suffers from various issues. First of all, the PS2 version doesn't use analogue sticks which is a pain in the butt. Secondly, characters don't open their mouth when talking, stuff like that ruins the experience for me. Other than that, there are no other issues that will stop you from liking this game if you are a fan of the show. 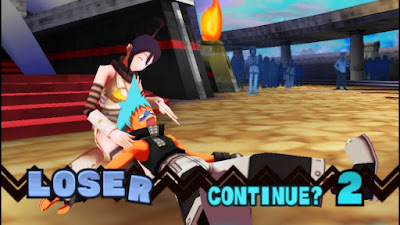 '' But is this game worth my time and money '' this is probably what you are wondering right now. Well, if you are expecting something as great as Dragon Ball FighterZ, then skip this one completely. However, if you are a diehard fan of the show and you don't mind hunting these obscure titles than never left Japan, then go for it, son. You will enjoy it.

Now how can you get this game you may ask. It's quite simple. You have two choices. Either use a PS2/PSP emulator or hunt it down on eBay or Amazon. Beware that it's not a cheap game, and most of the sellers are not willing to import it outside of Japan.

Thank you for reading. If you enjoyed this look back at this game you may want to check out my review of Soul Eater: Medusa's Plot for the DS that can be read here!