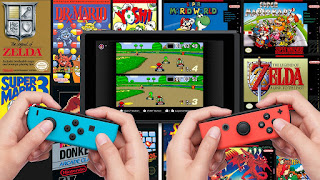 On September 4th, 2019 Nintendo held one of their Nintendo Direct events and there was quite a bit of information revealed. The Geek Getaway will get more in depth with many of the things announced but for right now let's just take a quick look at Nintendo Direct September 2019.

Blizzards team based multiplayer online FPS game comes to the Nintendo Switch on October 15th of this year. While you have to wait over a month to play the game, you can already pre-purchase it on the E-Shop.

Play SNES games on your Switch


Anyone with a Nintendo Switch Online membership will get 20 free SNES classics to play starting September 5th. The list of games is below and there are only a few that are not considered among the best the SNES had to offer. The games will include suspend and rewind functionality from launch. Select games will feature online multiplayer as well voice chat. More games are said to be on the way.
Super Nintendo Entertainment System Controller
To make your SNES nostalgia complete, Nintendo will be selling SNES Controllers for the switch for $29.99 each. These wireless controllers will only be available to Nintendo Switch Online members (and people who buy them secondhand off of E-Bay). Nintendo has set a limit of 4 controllers per account.

Tokyo Mirage Sessions #FE Encore
The Wii U game that brought together the Fire Emblem and ATLUS worlds is coming to the Nintendo Switch with a new song, new story elements, and on the go functionality.

Tetris® 99 – Ver. 2.0 + DLC Update
Tetris 99 is adding an Invictus mode. To play this new mode you must have obtained a TETRIS MAXIMUS (placed first in a traditional online game of Tetris 99). Daily missions are also being added. These will reward players with tickets that can be exchanged for different themes. New player icons are being added to show off your accomplishments in these new features. The 2nd wave of the Big Block DLC is also coming soon. The 2P Share Battle mode will have you share Joy-Con controllers for a two-player game against each other and the CPU. The Local Arena mode sees friends get together in person to battle via the new local wireless multiplayer. The version 2.0 update and new paid DLC for Tetris 99 will launch September 5. A physical version of Tetris 99 will be available starting Sept. 6 and will include all Big Block DLC plus a 12-month individual membership to Nintendo Switch Online for a suggested retail price of $29.99.


"Polteageist is a ghost-type Pokémon, and makes a home for itself by hiding among dishes at hotels and restaurants. Its body is made of tea, and it may even let a trusting Trainer have a taste of its tea. The flying- and water-type Pokémon Cramorant will swallow absolutely anything that looks hearty enough. It has an exclusive ability called Gulp Missile. While using Surf or Dive in battle, it will counter when attacked."

While traveling the Galar region, players can change the outfits and make-up of their trainer. Players will also be able to camp at Pokémon Camp, allowing them to play with their Pokémon or cook curry on rice. The different kinds of curry on rice you can cook will be tracked by your Curry Dex. Additionally, players will be able to visit the camps of their friends. This will allow up to 4 players and their Pokémon to hang out together.

The Legend of Zelda: Link’s Awakening
The remake of Link's Awkening DX, the remaster of Link's Awakening, is releasing on September 20th. Along with the new art style the new version of Link's Awakening is a new custom Chamber Dungeon system. You will be able to earn chambers during the game then mix and match them to create your own custom dungeon that can be shared via compatible Amiibo. On the same day the game launches a brand new Link Amiibo, made in the art style of the game, will release.

Luigi’s Mansion 3
From the disco floor, to the Tomb Suites, to the pirate themed restaurant, every floor in the haunted hotel in Luigi's Mansion 3 will feature a different theme. The newly announced ScreamPark party mode will have 2 to 8 players placed on two opposing teams. Team Luigi and Team Gooigi will compete to see who can defeat the most ghosts, collect the most coins or break the most targets. The doors to the hotel open on Oct. 31.

Animal Crossing: New Horizons
Players join the Deserted Island Getaway Package by Nook Inc, and start a relaxing new life full of creativity, charm and freedom in this next installment in the Animal Crossing series, launching for Nintendo Switch on March 20, 2020.

DAEMON X MACHINA
This new action-mech game launches on Sept. 13, but players that want to take those powerful mechs for a spin can try out the free demo version of the game. In this Prologue demo, players will pilot their mechs through the beginning of the game, and all progress earned will carry over to the main game should players choose to purchase it. A key feature of the demo is the ability to play in local co-op mode with up to four players.

Super Kirby Clash
This is a new free to start multiplayer action game you can join 3 other players to defeat tough bosses. Each player chooses a unique role that can be buffed with crafted weapons or Gem Apples. Gem Apples can be earned in game or purchased with real world money. Like many other F2P games you have to manage a time resource, Vigor in this case, in order to keep playing. Gem Apples can be used to recharge vigor, buy weapons, buy support and sticker items, and unlock new quest. The game is local unless you have a Nintendo Switch Online Membership.

Divinity: Original Sin 2 – Definitive Edition
This critically acclaimed and fan loved RPG is now available on the Switch. Play with 3 others at home or on the go. No word on what other new features migt be present in this "Definitive" Edition.

Return of the Obra Dinn
Return of Obra Dinn is an indie game coming to Nintendo Switch this fall. You play as an insurance investigator for the East India Company and must discover all the mysteries of the Obra Dinn. Investigate, turn back time with the Memento Mortem pocket watch, and explore the ship's surroundings to solve this case.

Little Town Hero
This brand new RPG from Game Freak, the developers of the Pokémon games, players battle monsters and gather support from townspeople. Players do this while staying within the borders of a single town. Little Town Hero will feature music by Undertale creator Toby Fox. This game comes to the Nintendo Switch on Oct. 16. Little Town Hero is available for pre-purchase in Nintendo eShop.

Rogue Company
Rogue Company, a brand new IP from Hi-Rez Studios, is a 5-v-5 online shooter. Players will battle against friends or instantly match up online with a similarly skilled team in a variety of objective-based modes. Mercenaries can be fully customized to match the player’s style. Rogue Company comes to Nintendo Switch sometime in 2020.

Devil May Cry 2 - Sept. 19 (You can already pre-purchase in Nintendo eShop)

GRID Autosport - Sept. 19. (You can already pre-purchase in Nintendo eShop)

Ni no Kuni: Wrath of the White Witch Remastered - Sept. 20

Call Me Casual: Why We Shouldn’t be Afraid of the Casual Label

Written by Slaya Nemoy Call me Casual. No seriously, call me a Casual. My favorite game is The Sims 3 which, according to my steam counter, I have played for an embarrassing number of hours.My second favorite game is Fire Emblem…on easy mode. I am definitively not a "Core" gamer nor am I even close to being a Hardcore gamer. Credentials out of the way, there is something very serious we all need to talk about. We need to not be afraid of the casual gamer label, even if it is used as an insult. First things first, what is a Casual gamer? This is something that has been argued endlessly on the internet. Urban Dictionary divvies up the gamer classes into three main ones, Casual, Core, and Hardcore. The Casuals are generally non-competitive who “don’t place their gaming as a first priority.” Core gamers dabble, probably play a large variety of games, but are not as dedicated as the Hardcore gamers. Hardcore gamers are the ones who go nuts when gaming doesn’t go their way

A few days ago I gave a quick preview of the upcoming Kickstarter game Nilspace. The developers of the game, 1LookGames, agreed to answer some questions about the game via email and you can read their answers to my questions below. Enjoy! TonyTGD: How long has the team been together and how did you guys get together? 1LookGames:   The team has been together for a little over 3 years. After being tired of waiting for an SRPG that lived up to some of the classic Fire Emblem games, Scott (founder of 1 Look Games) decided to make his own SRPG. He started the project in the summer of 2016 and worked alone until early 2018. Once he had a demo for the game (an mvp) as proof of concept, he reached out on Reddit, game dev forums and game dev discords to build the team. We started out with writing to map out the game and get the themes of the game going. From there we brought on music and art over time. The core team is 5 devs and 1 marketing lead. TonyTGD:  Is this the first project you guys