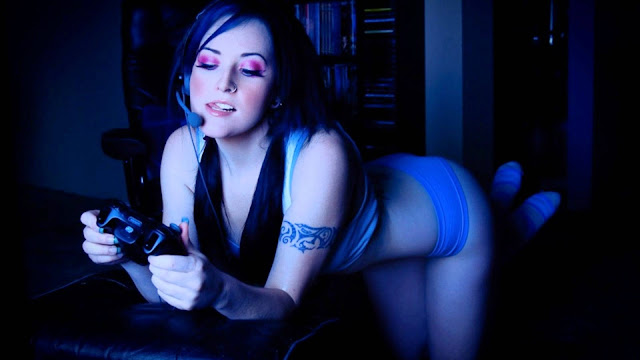 First off, yeah the pic in the beginning is pretty much click bait. Sorry, but I think what I have to say about this subject warranted getting as much eyes on this article as possible. Secondly, the picture toward the end of the article took longer to find then actually writing this article. Third, in no way, shape, or form am I a feminist. I appreciate an attractive women, I enjoy "cheesecake" very much, I have no issues with women looking sexy while playing games, starring in games, or talking about games. Now, with all that said, we really need to talk about "gamer girls." You notice how I put that in quotes, because it seems this term has taken on a life of its own and no longer means actual female gamers but instead it is used to describe females who play games while looking sexy. Now, as I said before, I got no problem with attractive women playing games and I even know an attractive female who is not a gamer girl, but a true female gamer. The problem I have is men, very stupid, teenage, hormone driven, men believe that female gamers should look and behave like these so called "gamer girls." 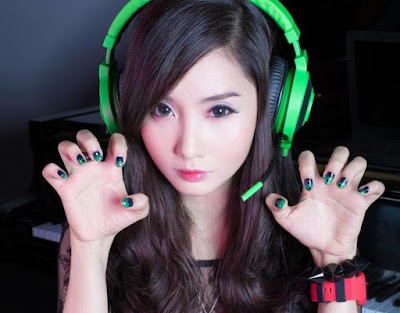 Now, I don't know about you, but I don't think strippers will take any opportunity to hop on a pole and twerk for dollars, so why do people believe that these women, who may actually play games off camera, act like the above pictures when they are alone? These women pretending that this is normal leads to men going crazy when they hear a female voice over their headset. These men, thinking that all female gamers are oversexed horn dogs, act like fools trying to get some action from these women instead of just playing games with them like these actual female gamers want. This behavior, coupled with the moronic misogynistic attitudes of some guys, leads to females abandoning games and thus they create the idea of female gamers being few and far between. 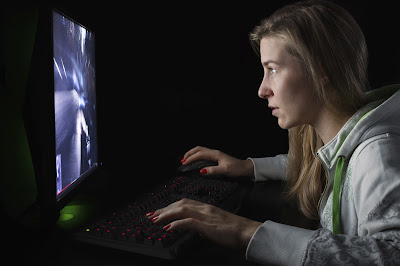 Look, porn is all fine and dandy as long as we realize that the pizza guy is not getting a special tip nor is he bringing "extra sausage" to that lonely housewife down the street. Gamer girls are fine too, as long as we realize it is just an act to make money by women not willing to work in the strip club. Females game just as hard, and in some cases harder, then us guys and we need to respect that. We also need to back off a bit and get to know the voice on the other end of the headset before trying to get them in our bed. These women playing Call of Duty, Fallout, or Mortal Kombat don't want your number, your pick-up lines, or you're dick pics...they only want to whoop your ass in a game or help you beat that next boss fight. Let me leave you with this bit of advice, if you wouldn't act that way if she was next to you on the couch gaming then don't act that way online. So, go out there and have a great time and don't be shocked when you find out you got a no scope head shot death from a female gamer. As always. feel free to comment, like, share, tweet, or whatever other thing you kids do on your social media these days.
*All images are owned by their respective copyright holders and are used under fair use guidelines

Following the indie scene you will probably notice what type of game engine is being used, but it’s always nice to see when devs are using an older engine to create something new. While technical limitations of the 90s have long been overcome, it’s interesting to see what developers will come up, when thinking “inside the box”.   A.W.O.L. is a tactical mil-spec FPS game, being developed using the BUILD Engine, the very same engine behind such classics as Duke Nukem 3D, Blood and Shadow Warrior. Despite being developed using the BUILD Engine, A.W.O.L main focus (despite shooting), is on the tactical aspect and AI. You will encounter intelligent enemies, that will flank, engage in search and destroy tactics, work as a group and so on. In addition to this, you will also have the option of commanding your squad as well, consisting of three AI teammates all with unique behaviors, that will assist you greatly in combat.   The story follows Dwayne Allen, a recently discharged special forces o

{*Full disclaimer the Intellivision Entertainment CEO Tommy Tallarico has appeared on video several times expressing hate and or contempt for myself and my website due to the in-depth and critcal nature of my coverage of the Amico. Despite this I still have a pre-order for the console, bought the 8-pack Limited Edition Boxed set, and won a charity auction for a signed Amico shell.} [Article Updated on 11/23/2021] The thrice delayed console has once again found itself in the middle of a fiasco of their own making, one that may have actual legal repercussions. On Thursday November 18, 2021 Intellivision Entertainment uploaded a Battle Tanks deep dive video to their official YouTube channel. Within hours of it going live eagle eyed viewers were able to recognize a myriad of assets that belonged to other sources.( 1 , 2 , 3 ) Shortly after this discovery was posted to Reddit the video was unlisted from the official Intellivision YouTube channel. As fans and critics discussed the suspect a