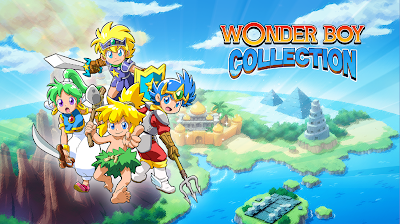 *The Geek Getaway received a review copy on Ps4/5
ININ Games and Bliss Brain come together to bring the Wonder Boy Collection to the PS4/5 and Nintendo Switch. For $29.99 you can get the game collection, 4 games in total, in either the physical or digital version. The games included in this collection are Wonder Boy (1986 arcade version), Wonder Boy in Monster Land (1987 arcade version), Wonder Boy in Monster World (1991 Sega Genesis version), and Monster World IV (1994 Mega Drive version). All four games have a rewind, fast forward, and save state feature. The 2 arcade games have additional options to adjust the game just like you could adjust the arcade cabinets upon their release. Additionally, the game has various filters, screen sizes, and other picture adjustments. There is also a gallery with some pictures you can look at. 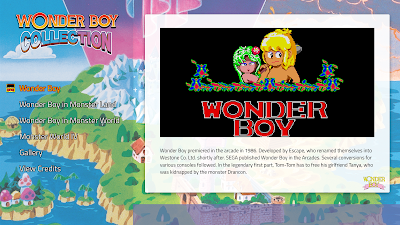 Wonder Boy is the game that kicked off the series and it is the only game that plays like a platformer and not an action adventure game. Those familiar with the Adventure Island series will feel right at home as Wonder Boy is the game the original Adventure Island was based on. Veterans of the game should note that the controls have been tweaked slightly, run and high jump both given dedicated buttons as opposed to having to hold the attack button to run and the jump button to jump high.
Wonder Boy is a classic game and the rewind feature allows you to easily undo any mistake you make on your way to save your girlfriend. It is your standard run right, collect items, and avoid/kill enemies game but it is done in such a tight manner that it never gets stale. The game really is a lot of fun and the one game I came back to time and time again when I was playing the collection for this review. 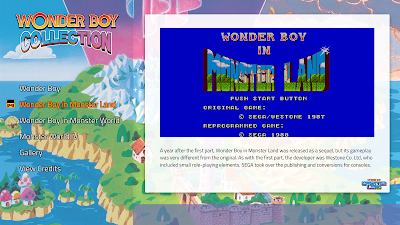 Wonder Boy in Monster Land took the series in a direction that continued throughout the rest of the games. It is an action adventure platformer with some RPG lite elements. Much like the Legend of Zelda II, Wonder Boy in Monster Land has a lot of 2D side scrolling, sword swinging action. In your quest to defeat the MEKA dragon you travel to 12 different areas and collect items, gold, and hearts.
The gameplay is pretty solid in this game and it holds up as well as the previous game in the series. When it first came out it must have been quite a shock seeing as the previous game was radically different but playing it now, long removed from that shock, the gameplay is exactly what I come to expect from the Wonder Boy series. Any fan of the series needs to play this one all the way through. 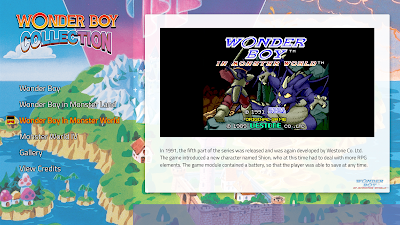 Wonder Boy in Monster World is the 5th game in the Wonder Boy series and it takes all the elements of the previous action adventure games and further refines them. The controls are much tighter and the addition of travel companions really adds a depth to the gameplay that the previous games lacked.
There isn't much more that needs to be said about this classic game except that both the save state feature and save game feature function in this game independent of one another. This allows you to save your money when you just want to save the game but use an inn when you want to recover your life and magic meters. 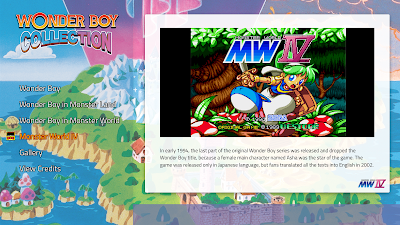 Monster World 4 is the 6th game in the Wonder Boy series despite being the first to drop the Wonder Boy name. (They dropped the name due to the fact that you do not play a boy/man in this game but a female named Asha.) Originally only available in Japan the game eventually made its way to the West via a 2012 port to the Nintendo Virtual Console(Wii and Wii U), Xbox Live Arcade, and Playstation Network.
Once again the game expands on the formula established by previous games in the series. Asha has several abilities, like swinging her sword in several directions, that really make this game play a lot smoother than its predecessors. Additionally, Asha's pet Pepelogoo can be used for various functions like double jumping and fire extinguishing. It is another solid game in the franchise and my second most played game in the collection.

Final Verdict: Recommended!
Ultimately the value in this collection is determined by whether or not you like the type of gameplay these games present. As all four games are solid and fun entries in their genre I can honestly say you will love them if they are what kind of games you like. The Anniversary Collection has more value, as it has more games, but this 4 game collection is well worth the $29.99.

What Inspired: The Uncharted Series

After the success of the Jak and Daxter series on the PlayStation 2, Naughty Dog decided it was time for the series to take a rest. However, that wasn't the end for Naughty Dog's career. It was merely the beginning of something big. Something that would surpass their past projects in terms of sales, recognition, and graphics. Shortly after Naughty Dog was done with Jak 3, a team consisting of talented staff members was assembled to work on a brand new IP. The new IP would look entirely different than the Jak and Daxter series, and would be created to be a suitable new title for the new hardware at the time (Sony's PlayStation 3).   Naughty Dog had bigger ambitions and wanted to create a more sophisticated blockbuster with realistic graphics, realistic human characters and breathtaking visuals unlike cartoonish ones seen in previous games. Thanks to the PlayStation 3's advanced technology, the developer was able to make their ideas become a reality. And so their new fran