Grand Theft Auto: The Trilogy – The Definitive Edition was a Definitive Fiasco 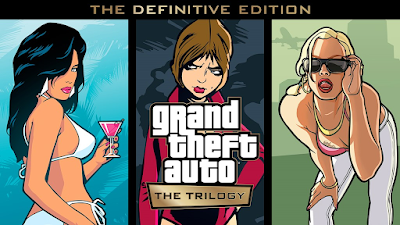 If you followed the gaming news recently, chances are that you have probably seen or heard about the GTA The Trilogy - Definitive Edition. What was supposed to be a simple remaster job, to make the most popular and beloved GTA games more accessible and playable on new systems, turned into an unmitigated disaster.

One of the things that you will notice right away is that the Definitive Edition, wasn’t developed by Rockstar Games, but instead, it was delegated to Grove Street Games, which mostly did mobile ports of other games.

The Definitive Edition encompasses three games: GTA 3, Vice City, and San Andreas. A difficult task to make some of the best games more accessible, and one that requires passion and dedication. After the initial announcement, the response was positive, but nobody expected this fiasco.
Each game in the definitive edition was hit with different problems, bugs, glitches, and even crashes.

The worst offender of this was GTA 3, where the game not only had weird graphical glitches and sound problems, but also special effects were glitching out and in some cases, the textures wouldn’t even look right. Shaking the camera left and right while driving, produced a very funny glitch where the car model would go wide, making you believe someone was playing a prank on you. Even the rain effect looks horrible, as it obscures the screen, making the game unplayable. For the game that popularized the series and was the first GTA game to many, this was a travesty.

Vice City was the least affected, but there were still cases of textures not loading properly and sound glitches. San Andreas on the other hand looked horrendous, not just due to missing draw distance fog (as you can now see the other side of the map), but the character's models were remade, horribly to the point that you couldn’t recognize them anymore.

Looking more into the games, it seems that Grove Street Games simply took the Mobile ports of the games and moved them to the modern systems. The plain laziness of the developers is appalling when taken into account the influence of these games. One could argue that the developers didn’t have the time or the money to properly take on this task, but that argument fails, since this is one of the flagship franchises of both Rockstar Games and Take-Two Interactive. Personally, my initial expectation for the Definitive Edition was to make the game more accessible and to renew the licensed music found in all three games.

However, there were a few signs that this remaster wouldn’t go as planned, which were mainly ignored by mainstream audiences. One of them is Dan Houser and Lazlow Jones leaving Rockstar, both of them who had a huge influence on the series. Other news such as Take-Two removing the old GTA games, some of which were decades-old using DMCA notices.

These actions, sadly seem to indicate that perhaps, with the fiasco that was GTA The Trilogy - Definitive Edition, that Rockstar (and Take-Two) are losing their touch, and are no longer interested in making quality games.

While, yes the game was never that anything special when it came to graphics, it was the sheer amount of passion and care that went into the game, that you could feel that the developers were having fun developing these games.

With Rockstar removing the original games from Steam and only putting the Definitive Edition for sale (via their site and launcher), the only way to experience the originals and its magic are to find either the original discs or via sites like G2A. This and other rumors, such as GTA VI being stuck in development hell, the long list of ports for GTA V, while Rockstar focuses more and more on GTA Online, could perhaps be the sign that the high watermark has passed.

The only glimmer of hope is that Rockstar Games after seeing the damage that the Definitive Edition caused apologized and promised to fix the games. But, a promise is a comfort for a fool, and people should wait and see what actions will Rockstar actually take.
Until then, it’s probably for the best to avoid GTA The Trilogy - Definitive Edition and play the originals instead. With a bit of luck, maybe you could just ignore that this edition even exists.