Let's take a look at the upcoming Kickstarter game Nilspace

Posted by TonyTGD on June 02, 2021
Full disclosure, Nilspace was brought to my attention when the developers 1LookGames reached out to me via email. After a brief exchange they agreed to answer a few questions via email and I will have their answers on the site when I get them back. 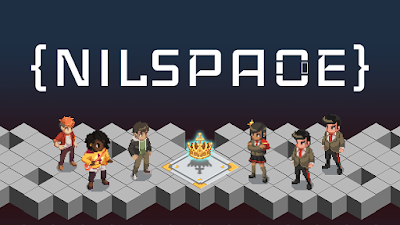 Nilspace is an upcoming SRPG from the indie developers 1LookGames that is scheduled to land on Kickstarter this June. Mixing elements from games like Fire Emblem and Persona 5, Nilspace looks to be an interesting game...if the developers can successfully pull it off. A prequel game is free for those who go to the 1LookGames website and sign up to be a part of their email list. It is unclear what platforms Nilspace is going to be on but there is a Steam page for the game if you want to add it to your wish list. I will have more information on the game soon but for now take a look over the fact sheet for the game and check out the teaser trailer.

Nilspace is a secret mobile game playing across the school campus. Guilds war over territory
despite not knowing who coded this mysterious app. Our protagonist has arrived several
months late at college and is thrown into the chaos of student life! He faces the daunting
challenge of catching up with his grades, gathering friends, and managing his schedule. And if
that wasn’t enough, a Nilspace developer unilaterally made him into a king! The newcomer has
become a major player in a game he doesn’t fully understand. He must strengthen his standing
on campus in time for the fierce weekend battles! Can he defy the odds to win it all?
“Nilspace is a celebration of building gaming communities.”