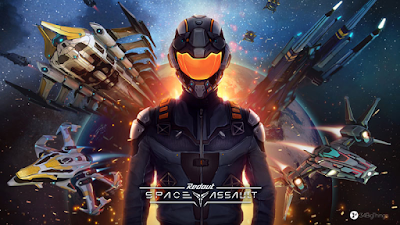 Redout: Space Assault Launches Jan. 22, 2021, on PC & Consoles
The long-awaited arcade shooter blasts off soon on Steam, PlayStation®4, Xbox One and Nintendo Switch!
34BigThings, the Italian studio behind the award-winning futuristic racer Redout, announced today its arcade space shooter based in the same universe, Redout: Space Assault, will launch on Jan. 22, 2021, on PlayStation®4, Xbox One, Nintendo Switch and Steam.
A prequel to the original game, Redout: Space Assault is a single-player sci-fi shooter that takes the best features of the series -- fast, epic pacing, high-skill gameplay and eye-popping aesthetics -- and combines them with new weapons and spaceflight mechanics. Featuring full vehicle customization and a wide variety of missions that will keep you on the edge of your seat, Redout: Space Assault delivers intense action with engaging roguelike elements across astonishing space battlegrounds.
“We are thrilled to deliver another exciting chapter of the Redout saga. Redout: Space Assault is an adrenaline-filled space shooter with a captivating story that will uncover the mysteries behind the reckless AG races of the original Redout,” said Valerio Di Donato, CEO of 34BigThings.
Features:
Redout: Space Assault launched previously on Apple Arcade. For more information, visit www.34BigThings.com, and follow the studio on Twitter.
About the Redout Franchise
Redout is the first internal IP developed by the 34BigThings team, a tribute to classic AG racing legends of the past such as Wipeout and F-Zero. Speed, adrenaline, fast-paced action, and eye-popping graphics are trademarks of this franchise, and Redout: Space Assault’s fascinating story is a prequel to the original Redout.
Redout: Space Assault won “Best Music” at the 2020 Excellence Awards by MEGAMIGS thanks to its smashing sound effects with full 5.1 support and an entirely dynamic soundtrack that complements the furiously fast and frantic space battles.
About 34BigThings
Est. in 2013, 34BigThings is a leading Italian developer for premium games across PC, console, and mobile devices which uses cutting-edge technology to create innovative genre-leading games that receive critical acclaim and capture the imagination of gamers around the world. The studio has released over 10 premium games topping charts on most gaming platforms. 34BigThings joined Saber Interactive in November 2020.
About Saber Interactive
An Embracer Group company headquartered in the U.S. with studios in Russia, Spain, Belarus, Sweden and Portugal, Saber Interactive is a studio whose credits include the 2019 hit World War Z (with more than 10 million players worldwide), Ghostbusters: The Video Game Remastered, SnowRunner, the NBA Playgrounds franchise, Crysis Remastered, The Witcher III for Nintendo Switch, and Halo: The Master Chief Collection.