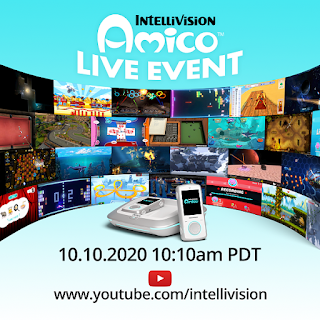 It is no secret that I have been very vocal in my criticism of the Intellivision Amico. I actually wrote about the system on this site three times which you can read here, here, and here. Alng with my written work I also made a few video rants on YouTube about the subject. You can watch one just below this paragraph.

I do think there is a seed of an idea behind the Intellivision Amico. I myself love couch co-op gaming, old school pick up and play gaming, and easy to learn hard to master gameplay. However, I have not seen anything offered by the Amico to satisfy my needs for those types of games. Other companies have been pumping these kind of games out, I see multiple cross my desk daily, and I think it would be a benefit to Amico to have some of those games ported over or make Amico versions of the basic gameplay setup. With that said, here are a few games that I would love to see on the Intellivision Amico.
Nexomon
Nexomon is the best Pokemon clone to come out in the last ten years and could bring in a lot of younger gamers to the Amico if the property is leveraged right. Obviously the unique Amico controller could be used to show Nexomon stats during battle, allowing you to play without the need to memorize every bit of info on your Nexomon. The built in Amico microphone could be used to allow kids to shout attacks and then have the Nexomon perform it, just like in the Pokemon anime. Nexomon could evolve (get it?) to the next level on Amico if the hardware was used to its full potential.
Supermarket Shriek
Supermarket Shriek is a crazy kart racer with a few twists. The first being, 2 players control a single cart, each player controlling either the shopper or the goat. The second twist, which can only be done on systems with a microphone, is each player "shrieks" to get the cart to move. Left player shrieks for left turns, right player shrieks for right turns, and both shriek to speed up. Is loud, wacky, family friendly fun that would fit right in with the Amico philosophy.
Nippon Marathon
Nippon Marathon might be the closest we ever get to seeing Takeshi's Castle(Most Extreme Elimination Challenge AKA MxC) in video game form. It is a zany racer with absurd obstacles in your path and equally crazy racers to choose from. This game may be a bit too Japanese, so I think Intellivision would be better served to make an Americanized version of the game for Amico. If the Amico controller was utilized right, Intellivision could add a few unique twists to the gameplay to freshen things up and keep families racing for years.
Neptunia Shooter
The Neptunia franchise have a pretty large fanbase but the main series games are a bit too risqué for the Intellivision Amico. However, Neptunia Shooter is a family friendly shmup that could snag a few Neptunia fans if it were ported to the Amico. Upgrade the game to include a multiplayer mode and the Amico might just be able to piggyback off the popularity of the franchise while keeping their digital hands clean.
Arcade Archives from Hamster
This last one isn't a game or franchise but rather a collection of arcade ports from Hamster Corporation. Part of the Amico pitch is retro reimagined games but many people just want to play the classics as they originally were. Getting the Arcade Archives on to Amico would satisfy certain gamers desire to play retro games while also bolstering up the library quickly and cheaply. Intellivision could also partner up with Hamster and, if licensing agreements allow it, make some Amico style versions of the classics we all know and love.
Well, there are just a few games I think would be a perfect match for the Intellivision Amico. What do you guys think would be good games for the system? Are you even interested in the console? Leave your thoughts below and be sure to follow us on social media.