When I first finished God Hand, I had this immense feeling of emptiness that lasted for a while. How could I finish such a phenomenal game in a week? Was I on drugs? That's something I asked myself for days. Yet, as usual, I went on my cruise to hunt anything similar to Capcom's masterpiece, but sadly I was met with nothing but utter disappointment. The game, in my opinion, was simply ahead of its time with what it incorporated back then.

However, hope shone one night when I was about to go to bed. I ended up stumbling across a game called '' Samurai Western '' for the PS2. Honestly, at first, I didn't think it was a big deal, but when I sat down and gave it my time I was blown away with some of its gameplay mechanics. And frankly, I'm not gonna lie,  it kind of reminded me of God Hand, but with swords of course. Anyway, come read about Samurai Western, one fine game buried with the PS2 where the sun does not shine.
Samurai Western was developed by Acquire, notably known for their games such as Tenchu: Way of the Samurai and the Shinobido series, and was published by Atlus back in 2005. Surprisingly, only few people are aware that this is a spin-off to the old fashioned Way of the Samurai series, just like how Shinobido is a spiritual successor to Tenchu after Acquire sold the rights to Fromsoftware. 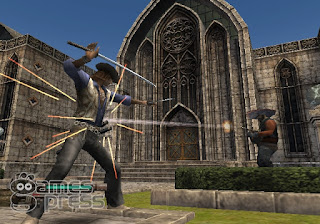 Players assume the role of a fearless samurai named Gojiro Kiryu, who travels to the old dangerous wild west looking for his brother, Rando. His journey will not go that easy. A hail of bloodthirsty wild west gunners wants him to meet his doom. Enemies equipped with revolvers, bombs, machine guns, and swords are coming in large numbers, surrounding Goijiro Kiryu from each corner. Nonetheless, Goijiro Kiryu takes the sword stance and goes on a rampage where he slices and dices them to shreds until it turns into a ballet of blades and blood. 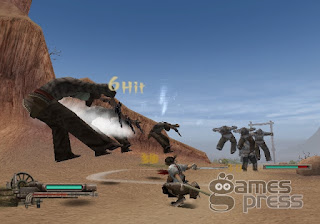 Unlike the old Way of the Samurai games which put an emphasis on the open world and exploring the surroundings, Samurai Western focuses entirely on hack and slash action. You can feel that the developers took what made Way of the Samurai an enjoyable samurai game, and sprinkled some new crazy new ideas into this spin-off.  The levels are divided into stages and each stage has certain requirements which must be met. For example, defeating all enemies (which is the easiest thing to do), and avoid getting a set amount of damage, otherwise, if the player fails to accomplish these requirements, the stage will be marked as ” failed ‘ which will prevent the player from accessing to the next stage. 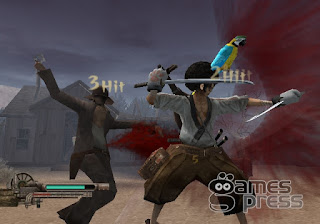 Just like any other game, Samurai Western isn't a perfect game. The game sometimes suffers from difficulty spikes where enemies will go from manageable to frustrating, especially Goijiro’s brother who is insanely fast and dodges literally anything the player throws at him.  In addition, , Samurai Western doesn’t feature the ability to conduct combos. Instead, it replaces that with flexibility and quick movement. Players will find themselves pressing circle/R1 button frequently to dodge anything foes throw at them. Moreover, Samurai Western replaces the combo system with different stances each time the player acquires a new sword. For instance, a sword may be easy to carry, while another one will be heavy due to its massive damage, and yeah, there is a double katana in the game as well.
Samurai Western puts a great emphasis on speed, and how quickly you can react to enemies' actions.  Bandits aren't playing around, they are paid to kill you after all. Just like God Hand, sometimes your hand will start to sweat due to how rapidly you'll end up pressing circle/R1 button to avoid receiving any damage. However, one feature players will find themselves enjoying is the ability to deflect bullets. Yes, you read that correctly, you can deflect bullets, even ones from a machine gun! Naturally, this all depends on how fast you can spam the attack button. In addition to this, the game features a rage meter that once fully charged will make Goijiro go on a rampage slicing anything that moves. This transformation doesn't last for long but it protects players from damage and increases defense and attack. It's a helpful feature if you are in the brink of death. 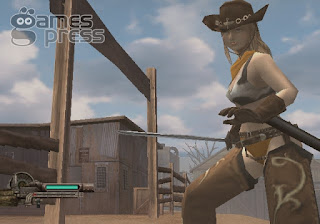 One thing I forgot to note is that the game features some RPG elements. For example, upon finishing stages, players will be rewarded with accessories such as hats, masks, and other extras. These items increase Goijiro’s defense, attack, agility and much more. Make sure not to forget them otherwise, it will be a nearly impossible to finish this game.

After you finish the game, you can restart all the levels you already finished with different characters. For Goijiro, you get to keep all of the items you've collected and your weapons. Hence, I think it's a fine feature for those who are willing to beat their past score and obtain new items. 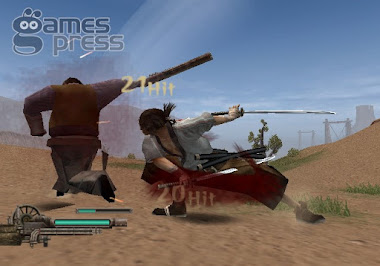 Unfortunately, Samurai Western was released in a year loaded with juggernaut titles and hot anticipated new IPs. Such as Devil May Cry 3, God of War, Star Wars: Battlefront 2, Dragon Ball Z: Budokai Tenkaichi 2, Burnout, Soul Calibur 3, and so many more that Samurai Western barely stood a chance to shine among them.

Final verdict: Recommended
Despite Samurai Western’s flaws and how it can sometimes get repetitive with the endless amount of enemies that the game throws at the player, it is worth the time for its immersive hack and slash action and the amount of fun it has. You'll find yourself enjoying slicing your foes, but at the same time, you'll get tired. It's a strange feeling that I'm unable to express myself. Oh, and let’s not forget how humorous the game can get the more you play. I recommend it to anyone looking for something similar to God Hand, or any hack and slash fan out there.