Paper Mario: The Origami King announced for a July 17 release; Will it return the series to form? 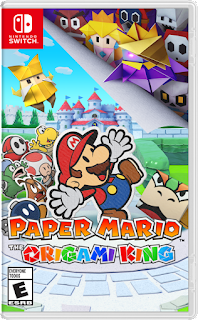 Earlier today, Nintendo debuted their latest upcoming game, Paper Mario: The Origami King, on their Twitter account. The title, which was shown off in a trailer, will come out later this summer. Taking on a creative new look, the newest Paper Mario title features an origami design for its characters.

While the last title, Paper Mario: Color Splash, came out for Wii U in 2016, this will be the series' debut on the Nintendo Switch. Similar to Color Splash and its predecessor, Paper Mario: Sticker Star, this series will follow a similar aesthetic design.

Whether Nintendo will model this after the more recent titles or the earliest ones remains to be seen. While Paper Mario (N64) and Paper Mario: The Thousand-Year Door (GC) are lauded as some of the greatest games of all time, the following titles began to deviate from their structure and quality. While Super Paper Mario deviated from the turn-based action into real-time, the design structure and quality felt similar as it was developed by the same development team as the previous title.

Paper Mario: Sticker Star seemingly scrapped much of the life and characterization that gave the series charm. This claim stems from a design choice by Mario series creator, Shigeru Miyamoto. The decision involved nixing the story while reworking the battle elements. The ensuing game became arguably the worst title in the series. Battle system elements, poorly designed puzzles, forced backtracking, limited inventory space, and Bowser's lack of characterization sharply brought the game's quality down. Developer Intelligent Systems would follow suit with the formula in Paper Mario: Color Splash for Wii U.

One thread on Reddit suggests Miyamoto is not entirely at fault, however. The thread features an interview with one of the game's developers. Regardless of where the blame lies, though, the design team completely deviated from what made the original titles good. Case in point, Mario & Luigi: Paper Jam, released in 2015 for 3DS, featured a crossover between the Mario & Luigi RPG series and Paper Mario. In this game, there were no original characters or races as in past games, like the Beanbean or Pi'illo people. Every character came exclusively from the Mario worlds designed by Miyamoto.

While some fans are indeed happy to see a new Paper Mario game, others are a bit more skeptical, believing history may repeat itself once more. Origami King lacks Flower Points and enemy party members, two key elements that made the original games special. However, this video from Nintendo's official Japanese YouTube account briefly showcases some battle footage.


Paper Mario: The Origami King will come out for Nintendo Switch on July 17, 2020. Keep up with us as we give you the latest on the upcoming Paper Mario game. You can check out the game's official website here. In the meantime, be sure to subscribe to our social media platforms for more updates. What was your favorite Paper Mario game? Let us know in the comments below.