Baki is a 26 episode, as of writing this column, anime adaptation of the Grappler Baki(Baki the Grappler in the West) manga. It started airing on Netflix in late 2018 but I didn't watch it until January 2020. Although I had heard of the Grappler Baki manga and older anime series, I never got into either one as a kid. The only thing I knew about the series before watching it was that it centered around bloody, violent, martial arts fights. Due to the fact tha tit is a series and not a movie, I will not give a detailed plot summary of each episode, but rather an overall series summary with my thoughts mixed in.

Baki starts off with 5(Dorian, Hector Doyle, Sikorsky, Spec, and Ryukoh Yanagi) convicts all escaping from the most secure prisons the world has ever created. 2(Dorian and Doyle) would even be executed prior to making their escape. One convict, Yanagi, even blows the brains out of a guard with his breath. Let me say that again, Yanagi literally blows aitr into a guys ear and his brains go flying out the other side! Yes, this series is that damn crazy. All 5 convicts leave notes stating they are heading for Tokyo, which is where our hero Baki Hanma lives. Baki is warned by Mitsunari Tokugawa, the owner/operator of an underground battle arena beneath the Tokyo Dome, that the 5 convicts are coming for him.

In order to demonstrate how deadly and bad ass each convict is, they go on to attack and defeat various characters from the Baki universe. These fights are action packed and feature impossible fighting moves and techniques that could never be achieved in real life. I'm sure if I had previous knowledge of the Baki universe these fights would have more impact but even without it they were good fights. 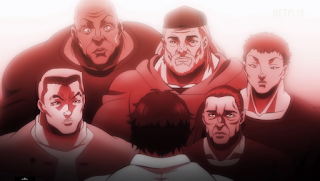 Seeing how these five convicts are out for blood and the desire to taste defeat, four former rivals(Doppo Orochi, Kaoru Hanayama, Goki Shibukawa, and Retsu Kaioh) of join him to face down these monsters. Again, previous knowledge of these characters would have helped to make the stare down between these two groups much more meaningful. Regardless, I was stoked to see these two groups clash.

Unfortunately for me, the showdown would be delayed by the fact that these fights would not be in the arena right there but rather randomly out in Tokyo. When things do start going, holy shit do things go off the rails! Characters fight and get their faces crushed, body parts destroyed, and bodies broken. As several members of the Baki coalition fail to defeat their opponents even more rivals of Baki show up to take on these deadly convicts. This leads to even more insane fights. Things really take a turn when our main character Baki is poisoned by Yanagi and taken completely out of action.

Without ruining anything, the Escaped Convict Arc, as it is known in the manga, comes to an anticlimactic end with the defeat of Yanagi at the hands of Izou Motobe. If that name seems to have came out of nowhere, you're not alone in that thought as it came out of nowhere for me too. Wit hthe last convict defeated peace is restored to Tokyo and our heroes can rejoice. Well, not exactly rejoice as, again trying not to spoil things, Baki is drifting further into the arms of death due to the previously mentioned poisoning.

Despite the 5 convicts being defeated the anime does not end just yet. We are treated to an episode that splits its focus between Muhammad Ali, yes THAT Muhammad Ali, and Baki. We are shown that Ali's boxing style is actually a form of martial arts that he almost had perfected before he refused to join the armed forces and was exiled from boxing. Meanwhile Baki is training with an old friend who is trying to nurse him back to health.

The last episode introduces Muhammad Ali Jr. as the heir to Ali Sr.'s martial arts while Retsu takes Baki to a special tournament in China. This last episode sets up the next season of the Baki series but really doesn't feature much action. It almost feels like it was episode 1 of season 2 that was shoe horned into the first season as sequel bait. 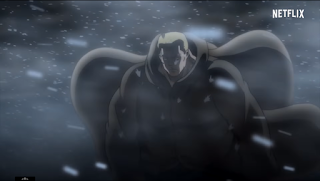 I only gave a selective synopsis of the series because I didn't want to ruin any of the twists and turns. Even if you, like me, have no prior knowledge of Baki you will really get a kick out of some of the surprises. They are just that insane!

Baki is almost a throw back to Japanimations like Fist of the North Star and MD Geist. The blood and action packed fights feature over the top techniques that will have you oohing and aahing. The show might even get a "DAMN!" out of you like it did out of me. I am greatly anticipating seeing season 2 and finding out if they can top the insanity of season 1.

Next time on Friday Night Japanimation I will be giving my thoughts on The Garden of Words.