Bravely Default II is a JRPG coming to Nintendo Switch later this year. Square-Enix and Team Asano, who developed Bravely Default, Bravely Second, and Octopath Traveler, are handling the game's development along with Claytechworks. Serving as a sequel to the aforementioned Bravely titles, this game was initially announced at The Game Awards 2019. On March 25, Nintendo announced a new trailer on the Nintendo Direct Mini.


Immediately after, Nintendo followed it with a demo on the Switch eShop. We will go over the demo here for those who haven't played it yet. Note that the story will not affect the main game as it's created as a sort of side-story introduction for players to learn more about the final product's story.

Right off the bat, you'll be introduced to the four new characters: Seth, Gloria, Adelle, and Elvis. For Final Fantasy fans new to Bravely, this enforces the "Four Warriors of Light" thematic from Final Fantasy I and V. While on their adventure to find the elemental crystals, the characters find themselves stuck in a desert town which flooded due to the Water Crystal's influence. You'll explore the town, take on a task to track down a gem, and complete side-quests as well. 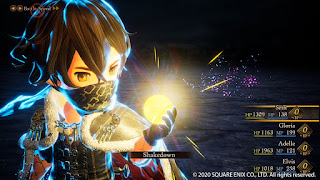 You're immediately greeted to the gorgeous town aesthetic featured in the Bravely titles. Exploring the city becomes a cinch thanks to the ability to zoom-out on the map. Plus you'll surely enjoy the catchy desert-themed music that plays in the town, Savalon.

Bravely Default II will feature the return of REVO, composer of the first game, which was known for its stellar soundtrack. Fans of REVO's work may recognize him from anime. Among his works include the opening theme songs of Sailor Moon Crystal and Attack on Titan.

One you step out of the city's safe boundaries, you'll encounter monsters. However, unlike past titles, you'll encounter them on the field, not randomly. Much like more recent JRPGs, attacking them from behind will allow you to gain the upper-hand immediately in battle. Likewise, they can ambush you if you carelessly fail to watch your rear. On the bright side, you'll surely appreciate the catchy battle music!


In battle, you'll assign commands, akin to a traditional JRPG, which the series is built off of. But what makes Bravely special is its use of Brave and Default. You can use Brave to gain multiple turns or Default to guard and build your Brave Points (BP). Using BP will drain your turns, meaning you won't be able to act till the BP hits 0 once more. Using this strategically can turn the tide in battle. Plus, you can use Seth's Special moves to hit your foes with massive damage.

Players familiar with Final Fantasy will surely remember its Job system. Right off the start, you're given several Job, or Class, choices. While everyone defaults to Freelancer, we highly recommend you change their Jobs before pressing forward into battle. These will heavily affect your stats, the abilities you learn, and the equipment you can wear. 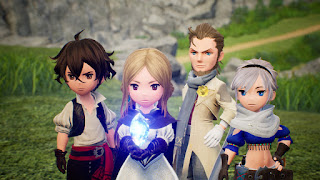 As mentioned in the demo notes, this mode can be quite challenging. You'll certainly need to grind a few levels before tackling the dungeon. I found the Wesps to be quite difficult until I reached several levels up and bought the necessary equipment. Once I got to the boss, I died the first time before realizing I could just hit him with Special to knock off his HP quickly. Afterwards, the game granted me the Thief Asterisk.

These Asterisks will allow you to change your Job. These become critical to the storyline and how you progress and evolve your characters. More combinations allows more options for dual-Jobs and the passive abilities you can equip to your character. Even though the demo technically ends after the boss fight, you're granted freedom to experiment with your new class and explore the demo a bit further.

Once you clear the dungeon boss, you can fight two tougher boss enemies: one via a side-quest and the other posing as a bush in the overworld. While past Bravely titles' demos featured carryover bonuses, we do not know yet if players will receive a similar reward in the full game. 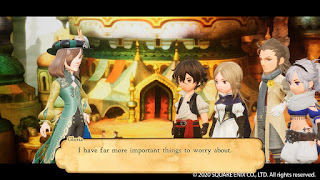 I noticed a few flaws I would like to point out, though. Some of them were easy, handy battle menu options, such as assigning the Default button to L or being able to end turns off 3 Brave moves even if you were planning to use 4. These options went missing in the demo. Plus the camera could throw players off in battle or on the overworld, and I noticed some graphical loading glitches when leaving the town. I imagine these will be fixed in the final game, but would also like to send the data to Square-Enix once they send their surveys out to players.

Also, despite the last game being named "Bravely Second," this title does not follow suit with "Bravely Third." Note that Bravely Second's ending left players with unfinished questions regarding the "Sword of the Brave," among other things such as the Ba'als. However, given the Bravely series' tendency to toy with major plot twists, and even play on the game's own titles, we're fairly certain that Team Asano will tie up those loose ends later in the full game.

Bravely Default II comes out for Nintendo Switch later this year. Be sure to keep up with us and follow our social media channels for the latest info on Bravely Default II and upcoming Switch titles. Finally, be sure to download the demo off the eShop now!

*All images courtesy of Square Enix