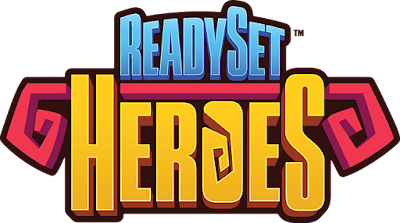 ReadySet Heroes is a new party game centered on cute animals beating up villainous creatures and, sometimes, each other. Developed by Robot Entertainment, ReadySet Heroes is now available for $19.99 on PlayStation 4. An Epic Games Store release for PC is still in the works, coming Winter 2019.

ReadySet Heroes gives 1 to 4 players the chance to duke it out against each other in a rogue-lite, dungeon-delving, silly adventure. Gameplay boils down to two modes: "Crawl n' Brawl" and "Tower Crawl."

"Crawl n' Brawl" indulges those with a sweet-tooth for competition. 1-4 players (online or locally) see who can run fastest through a randomized dungeon. Players face puzzles, traps and foes in teams or in a free-for-all. Each level ends with a treasure chest awarding new gear, like an electric lute or tornado spell. After eight minutes of gear-grinding, everyone battles arena-style for the highest score in one of five different minigame scenarios.

For those wanting something less competitive, "Tower Crawl" offers a single-player or local co-op experience. Instead of racing for loot, players must beat 30 dungeon floors with only three lives. Every few levels, a boss will appear to test players' skills with quick moves and light puzzle-solving action.

The game is surprisingly difficult despite its simple, cheerful presentation. Puzzles are never too hard to understand, but smart enemy placement and trap layouts make dungeon levels challenging. Controls feel great. Evasive dodges, counter strikes and all other actions are responsive and tactile.

I enjoy the core of ReadySet Heroes quite a lot. The game offers a well-built foundation that every other piece stacks upon. Much of the design is coherent and fun, but some important elements can be either buggy or lackluster.

On many playthroughs, bosses' AI would temporarily break. One boss, a large stone titan, often spun in a corner instead of trying to damage me. A slime king boss had a similar issue, occasionally bouncing in place. I was not sure if it was on purpose, but it made the boss encounters a lot less deadly than fights with minions.
ReadySet Heroes lacks a major spice in its gameplay: variety. There are several types of weapons to wield, but the distinctions between them can be a bit underwhelming. Most weapons have similar combos. Some weapons, like the lute, feel useless compared to the flexible and dangerous sword and shield or the long-range staff. The occasional loot drop I found had extra abilities, such as elemental damage or increased health, but buffs like these were.

Characters also lack a layer of mechanical diversity. Some characters start with slightly better defense or speed; however, several share the same skill buffs. The roster of animal adventurers serves as mainly cosmetic choices as opposed to characters with varied sets of skills.
The worst issue hurting ReadySet Heroes' replayability is its dungeon structures. Most dungeons I ran through on both "Tower Crawl" and "Crawl n' Brawl" used the same level patterns. This was especially the case for the beginning sections. It was nice to see myself improve at the small roster of stages. Going from "slapped silly by spikes and arrows" to "deftly capable of dodging" was satisfying. However, it left me wanting more.

There is a great potential for the game to expand in levels and mechanical depth through the free content updates mentioned by Lead Producer, Lance Hoke. As of now, the lack of content is noticeable and hurts replayability.

ReadySet Heroes offers a fun dungeon-delving party game experience, but the excitement of the game wears off quickly. The lack of character skills or abilities means its difficult to find exciting strategies to try out. Without any extra variables to change up gameplay, ReadySet Heroes does not manage to stand out from other games in the genre.