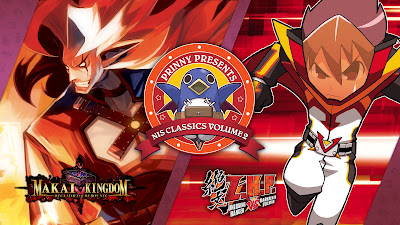 *The Geek getaway received a review copy of this game
The 2nd volume of the NIS Classics releases digitally on the Nintendo eShop on May 10th 2022 for $39.99 and it comes packed with Makai Kingdom: Reclaimed and Rebound and Z.H.P. Unlosing Ranger VS Darkdeath Evilman. Both games come packed with the familiar NIS look, wit, and endearing characters but they cover 2 different game genres. Makai Kingdom being a typical isometric SRPG similar to NIS's Phantom Brave. Unlosing Ranger takes a left turn and delivers an isometric rogue-like dungeon crawler that plays closer to Void Terrarium than any of NIS's Disgaea games. A physical copy of the collection can be picked up for $59.99 from online retailers like Amazon. Additionally you can buy either Makai Kindom or Unlosing Ranger individually for PC via Steam, no price listed as of the writing of this review. 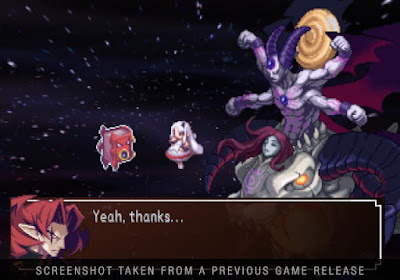 Makai Kingdom:
Makai Kingdom: Reclaimed and Rebound was originally released in 2005 on the PS2 as Makai Kingdom: Chronicles of the Sacred Tome but that isn't the version of the game included in this collection. Instead of a port of the 2005 PS2 release, this collection includes the 2011 Japanese exclusive PSP version of the game which added a "Petta mode" to the game. Petta Mode being a side story that puts you in the shoes of the main characters' daughter from the future. 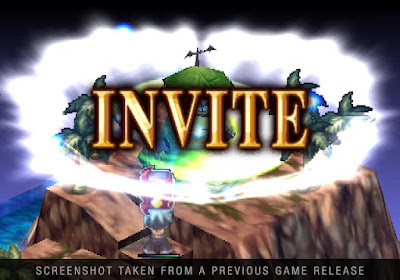 Speaking of the main character, in Makai Kingdom you are put in the shoes of Zetta, the "Most Badass Freakin' Overlord In The Entire Cosmos." Unfortunately for you, Zetta is turned into a book at the start of the game and he is relegated to being the means in which you summon units to the battlefield and not an actual playable character until New Game+. The game follows Zetta's journey to restore his body and dimension, which was destroyed when he was bound to the Sacred Tome. Along your journey you run into a cast of colorful characters that help you to bring your dimension back while also jockeying to take you out and usurp your title as "overlord of overlords."
The gameplay in Makai Kingdom is very similar to the isometric SRPG games Phantom Brave and Disgaea however there are a few differences. First off, the levels in Makai Kingdom do not require you to defeat every enemy, rather you must meet a point threshold to pass that particular stage. (Points are earned from defeating enemies or destroying objects strewn about the stage.) Another quirk of Makai Kingdom is the use of an open movement format rather than a grid like in Disgaea. This open movement, although still limited to a radius around your character based on their Move stat, allows characters to be packed in a lot closer than in Disgaea games. 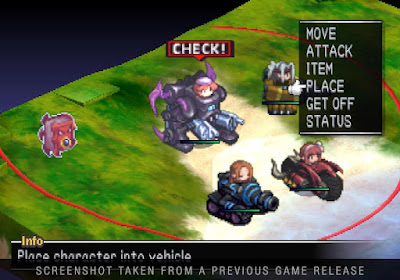 Vehicles make their first appearance in this game and they add a nice change of pace to the normal monster/human units. There is also a facility system that allows you to summon building to battle, giving bonuses to the units held within. The battles themselves are randomized so the amount of enemies can vary wildly as can the objects in a level. This can make early battles very tough if you get a bad map. The objects in a level are fairly important as you need them to create units as you do not just use mana but rather you attach a soul to an object. Each object offering different stat bonuses.
The last unique thing about the gameplay is the "extension" system that allows maps to grow bigger by tossing enemies or items into an extension area. Additionally, their are a few extensions that are unlocked by defeating an enemy labeled as "key" or destroying an object with the same distinction. Again, these extensions are also random so grinding in this game is a lot less predictable then it is in the Disgaea series. A final note about extensions, each one opened adds stronger enemies to the battle.
The Petta Mode added to the PSP version and present in this port is merely a side story that adds little additionally content and is a nice bonus to play after you finished the main story. That said, if you beat the game back in the PS2 day like I did then you can jump straight into Petta Mode from the start of the game. While it is a fun mode, I wouldn't purchase the game for it alone. 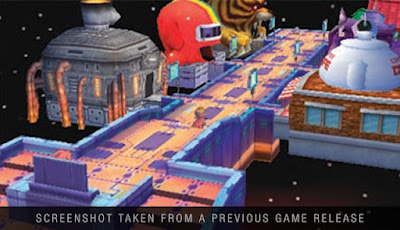 Unlosing Ranger
Z.H.P. Unlosing Ranger VS Darkdeath Evilman is a 2010 PSP exclusive game that is finally being ported over to PC and Switch. As I said earlier in this review, the game is an isometric rogue-like dungeon crawler that places you in the shoes of the brand new Unlosing Ranger. The current Ranger got the job after the previous one had died after getting struck by a passing automobile and forcing the mantle onto your character. As the Ranger was on his way to fight the undefeated bad guy Darkdeath Evilman before his untimely demise, you are tasked with defeating the super villain. Obviously you lose and the gameplay loop kicks in as you train in order to grow strong enough to defeat Darkdeath and save the Super Baby and world. 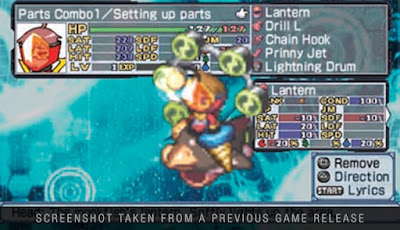 The gameplay in Unlosing Ranger is a typical mystery dungeon, as you gain levels but have them reset upon defeat or finishing the dungeon. Regardless of how your levels are rest, you gain bonus stats based on how many levels you gained and every victory or defeat makes you stronger overall. Various facilities in the hub world can be used to further increase your stats and bonuses as well as the stats and bonuses of your gear. Gear which wears down with use or damage received so you need to keep your eyes on your gear status if you want to make the most of your equipment.
There is nothing extra added to this port but the autosave feature seems to have been disabled for this game. This is despite getting a splash screen noting the autosave feature being in the game. With that in mind, you should make it a habit to save often. 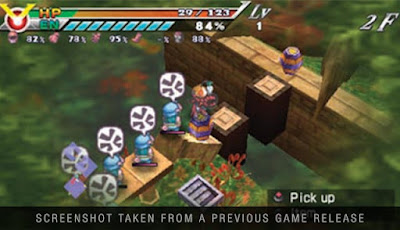 Final Verdict: Recommended
Both games in this collection are, in my opinion, worth the $40 price tag if you hadn't played them previously. Unlosing Ranger was exclusive to the PSP and if you are like me, then you never played it on that platform. For that reason alone I would recommend this collection as Unlosing Ranger is a lot of fun. Now, the collection is not perfect as the crashing issue with Collection 1 is still present in Collection 2, although it seems to happen less frequently. This is an annoyance but saving frequently will make this rare occurrence hurt a bit less. Obviously both games are niche genres so if you do not like games of these type then this collection is not for you. However, if you are like me then you will enjoy the hours of grinding for stat increases.