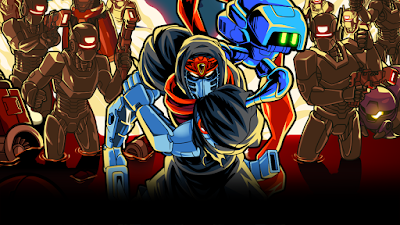 Ever wondered what an NES Ninja Gaiden game would look like if it was to be made today? Although many titles have tried to do just that, they couldn't bring up the main thing that made the classic Ninja Gaiden a highly regarded series throughout the years. It's the challenge accompanied by frustration and the eventual thrill of overcoming it all. Titles like The Messenger, while being a great game, didn't feel close to Ninja Gaiden because it relied way too much on backtracking towards the end. It felt more like a Metroidvania game than a Ninja Gaiden type-game.
After digging for a long time I finally discovered a title that I can call a true spiritual successor to the 8-bit Ninja Gaiden franchise. This retro-styled platformer developed by Mechanical Head Studios and published by the titular Shovel Knight developer Yacht Club Game manages to successfully emulate the 2D Ninja Gaiden formula. Not only that but also, the game keeps evolving the further you progress.
Before you dive deep into Cyber Shadow, you should already know that you're in for a brutally difficult game. So, expect to die lots of times before you progress. 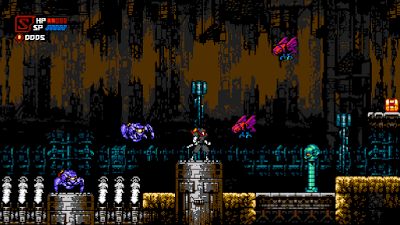 You journey through hardships by controlling your buddy Cyber Shadow who awakens from an incubation pod only to find the city in ruins. A mad scientist has unleashed his wrath upon the world and has overrun it with endless machines that cause havoc wherever they go. It's up to Shadow to thwart his plans and restore peace. Interestingly, every bit of information about the story is told through in-game dialogues and highly detailed 8bit cutscenes much like the classic Ninja Gaiden games. As you progress, you find your fallen comrades' souls and uncover the secrets behind the city's downfall. It may seem like a simple story, but there are twists here and there.
Players start the game with a frail Shadow, possessing only a few moves under his belt such as jumping, slashing, and running. Luckily, The first level is just a tutorial to help players familiarize themselves with the basics. Actually, the beginning of Cyber Shadow fools you into thinking the game is a walk in the park, but it only takes a few minutes before things start to go brutal through the second level. Enemies will begin to spawn from every corner while spewing endless bullets at your face. Unforgiving boss fights that keep getting harder and harder to the point where it feels impossible at times. Oh, and let's not forget the spikes through the end of the game, they're everywhere, and they're frustrating. 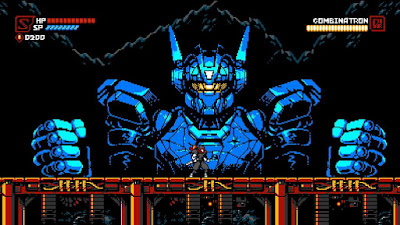 To ease the brutality a bit, the developers have implemented quite a few features that are pretty helpful because if they weren't there that would've made the game's difficulty similar to the likes of Ghosts 'n Goblins. Such features are checkpoints that act as a respawn point. These checkpoints also come packed with a health restoration tool. Not only that, but you can also purchase power-ups if you have enough in-game currency. These enhancements are permanent, so each time you die and respawn, they're re-activated once again. You should know that each checkpoint comes loaded with a different power-up, and all of them are pretty much useful, especially the shield.
The gameplay in my opinion, while obviously being similar to Ninja Gaiden, is also similar to another ninja game called Shadow of the Ninja for the NES. Cyber Shadow manages to keep you engaged by rewarding you with different upgrades with each fallen ninja soul you obtain. Furthermore, Shadow will be capable of counterattacking incoming projectiles, hanging on walls, jumping and hitting the ground with his katana, and much more eventually.
Despite Cyber Shadow providing a handful of upgrades, it doesn't mean the game won't put your skills to test. The game puts heavy emphasis on quick reaction to your surroundings, and your ability to deal with challenges. If you grew up with, or have already played the classic Ninja Gaiden games, you'll know how it feels to be surrounded by endless enemies coming from every corner, while something else is shooting you from above. It's all about fast thinking and staying alert while learning enemies' patterns to survive. 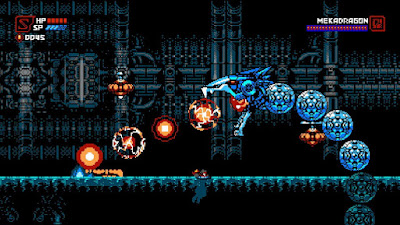 At times, I felt the difficulty in Cyber Shadow was not manageable. I remember dropping it throughout the middle of my playthrough because some moments felt impossible until I gave it another try. But here's the thing, Cyber Shadow nudges its players to hone their skills and try to learn from their mistakes. It's this dedication to always come back, and never give up no matter what. However, it saddens me to say that, at times, you'd be forced to do specific actions with no room for errors in order to progress. Not only that but also the checkpoints become limited along with the sparse in-game currency drops. The game gets frustrating throughout the end if one doesn't follow specific actions which really breaks the experience in my opinion.
Similar to the Messenger, players can go back to levels they've already been to before to find upgrades and hidden items. But, backtracking in Cyber Shadow is annoying and messed up in my opinion. First of all, there are limited terminals in the game, and you'd be forced to start from the very beginning of the area until you reach your desired destination. The game's map is kind of useless tho. Personally, I would've loved it if the developers have pointed out the missing items in the map, or included more terminals instead of forcing the player to begin from the very start of the level. That's one of the worst things about the title, and it kind of annihilates the urge to go back to previous areas. 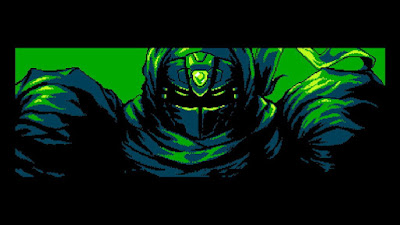 Despite Cyber Shadow being annoying at times, I can't deny that the soundtracks are absolute bangers. Every level has its own theme song, and every theme will succeed at sucking you into the action. Cyber Shadow, The Messenger, Shadow of Ninja, and Ninja Gaiden, all of these ninja games have one thing in common, absolute bangers.
Final Verdict: Recommended
All in all, Cyber Shadow is a great throwback to retro games. Its constant brutal difficulty will keep testing your skills until you get the hang of things. It manages to emulate the classic Ninja Gaiden trilogy in every aspect, including the gameplay, the level design, the atmosphere, and frustration as well, but that's how a spiritual successor should be. If you're looking for something close to Tecmo's masterpiece, then Cyber Shadow is your best choice, but if you're thinking that this game gets any easier, you'd be disappointed.