It would be easy to view Space Haven as just another Rimworld clone and call it a day, but that's where you would be wrong. Developed by BugByte, Space Haven is a spaceship survival management game, currently in Early Access for $22.99.
Since it's currently in Early Access, the game is still being actively developed, and there are constant updates. Currently, the game has only one game mode, "Normal Mode", but this mode offers enough depth and challenge to keep you occupied for hours. You can choose one of two starting scenarios: Basic Platform and Abandoned Mining Facility. The first one is for beginners and starts you out with just enough supplies and a basic platform. The Abandoned Mining Facility is intended for experienced players, and the station is converted into a shipyard. You must build your ship from scratch, but have a bit more options in customization.
Space Haven has four difficulties: Peaceful, Builder, Medium, and Harsh, all of which are pretty self-explanatory. The difficulty varies on the amount of adversity and starting resources throughout the game. In addition to this, you can also alter game rules, to better suit your playthrough.
Your starting crew consists of four people, all of whom are fully customizable. All of them have different attributes and skills, a previous occupation, and a trait revealed after the apocalypse; everything that will help you decide who to pick for your starting crew. The four of them will give you a total amount of their skills, shown in the "Team Skills" section, and the skills are on a scale from 0-3.
The game is currently very light on the story but you will piece together some of the lore on your journey. After all the chaos, wars, famine have finally caught up to Earth, people finally decided to go into space and look for a new habitable world. The first thing you must do is, survive and then slowly expand and explore. 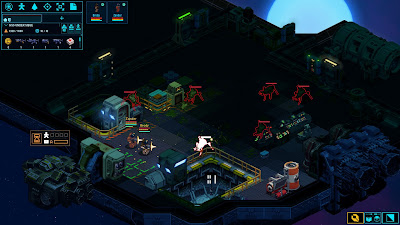 The main focus of the game is inventory and resource management. You will constantly keep an eye out for food, water, power, and oxygen levels. You have several ways to gather resources, either by scavenging, mining, or producing them. For example, you can scavenge or trade food, but you can also produce food, such as vegetables or artificial meat. Water can also be mined or recycled, while oxygen for example can be collected in several different ways. The other important thing is power as everything on the ship must be connected in order to work efficiently and you will constantly expand your power grid and levels.
In order to get produce and get more improvements, you must research new technologies, which is done through a Research Station. The speed of the research is determined by the person's skill and time needed to complete it. You must choose carefully which research to pursue early on as you want the ones that will benefit you the most in your current situation. The research tree is fairly modest at this time, but new updates will keep adding new technologies and useful items.
In addition to this, you must also keep a close eye on your crew, and tasks. Each crew member has their own likes and dislikes, relationships, and needs. Taking a more detailed look at them, you will see their current tasks, conditions, and health status. If they're unhappy for a long period of time, for example, they might get depressed, which will begin to interfere with their tasks. Relationships between your crew happen naturally and will happen passively without your input.
When you finally have expanded a bit, and upgraded your ship with hyperdrive, you can start exploring other star systems. Before you start going into hyperspace, you will need fuel, but in the beginning, you will always have a modest supply to get you going. On your journey you will encounter several different factions, such as traders, pirates, military alliance, slavers, etc. While most of them are neutral in the beginning, you will slowly but surely make friends and enemies. Also, during your journey, you will, sooner or later, come across derelict ships or space stations. These derelicts can be explored for valuable information, resources, and if necessary stripped for raw materials. In some cases, there might be hostile aliens you must fight before attempting any interaction with the ship. 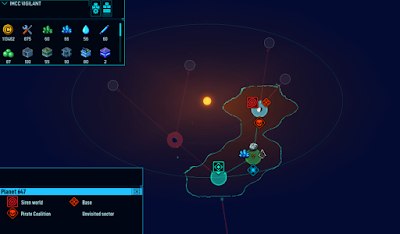 The combat in the game is fairly simple, for better or worse. You can draft your crew members and have them board other ships, and the combat is played out in real-time (with pause). Moving your crew into rooms with enemies, and automatically engage them, but you also have the option of choosing your targets. Recently. there was the addition of tactile ship to ship combat, also in real-time. You must build turrets that will engage enemy ships, or you can target specific areas on the ship. One direct precise hit can be enough to cripple the ship or severely damage critical systems. In all of these scenarios, your crew must work as a team in order to win.
Space Haven shows how to do an early access game right, and the developers are constantly updating the game and keeping in touch with their community. The game is also incredibly light and doesn't take too much space on your disk drive, and it can be played on almost any configuration. If you're looking for a good survival management game, with a sci-fi flavor give Space Haven a try. By the looks of it, the game is only continuing to grow and get better.