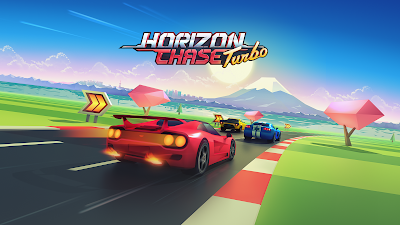 Horizon Chase Turbo is a 2018 homage to classic arcade style racing games. One look at the game and you will instantly get Out Run vibes. The game is available for PC, Mac, Linux, Switch, PS4, and Xbox One which means you have almost no excuse not to pick this one up.
Gameplay in Horizon Chase Turbo is standard arcade racing. You compete with 19 other racers to snag the first place trophy and hopefully set a course speed record. The twist in Horizon Chase Turbo is that you have a fuel gauge that depletes as you drive so you better pick up fuel canisters as you drive around the track. Additionally there are blue token you can pick up for extra points. If you get all the tokens on a track plus finish in first place then you are awarded a Super Trophy. Winning races unlocks more races, cars, and sometimes upgrades for all your vehicles. 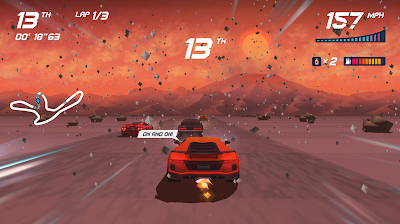 Horizon Chase Turbo is an easy pick up and play arcade racer that is fun to play solo or co op. The race tracks are varied and distinct, each city having its own style and flair. The game has no rubberbanding AI so races are won and lost by your skill alone. So far I am having a blast with the game and I can't wait to dive into the other modes beyond the campaign. To see the game in action you can check out the video below.