Nintendo released Super Mario 3D World + Bowser's Fury on February 12, 2021 for Nintendo Switch. This title features both an updated port of the Wii U Mario title as well as a new expansion featuring a powerful new form of Bowser called Fury Bowser. In this gargantuan form Bowser wreaks havoc while his son, Bowser Jr., recruits Mario to rescue him. This review will focus largely on the Bowser's Fury expansion. 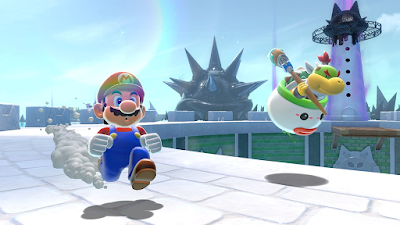 Story
Mario finds himself walking around the Mushroom Kingdom when suddenly he falls into a splash of M-shaped goop below him. This goop represents one of the many references to Super Mario Sunshine. As such, he finds himself on Lake Lapcat being recruited by Bowser Jr. to rescue his father. Under the influence of a powerful fury, Bowser takes on a massive new form wreaking havoc across Lake Lapcat.
This new world is centered heavily around cats. Everywhere you go, you'll find enemies with cat ears, tails, and even fur. Even the rainbows feature a cat motif. Bowser Jr. will accompany Mario to save his dad and it honestly makes for some heartwarming development in their rivalry. Plus you'll get to see a hilarious ending wrap it up when it's all said and done! 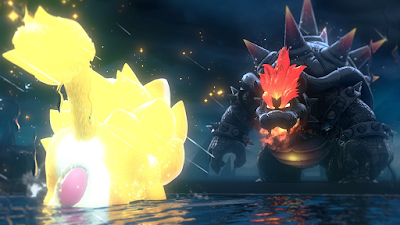 Gameplay
To put it briefly, Bowser's Fury marries the concept of the previous two 3D Mario titles together. On one hand, it features Super Mario 3D World's control scheme and power-ups. On the other, you'll explore a vast series of islands collecting Shines along the way. While the Shines get their name from Super Mario Sunshine, the method of collecting them and the open-world gameplay comes from Super Mario Odyssey. Plus, if co-op gameplay interests you, you can hand a controller to a friend or loved one and they can help you out as Bowser Jr.
You'll explore these various islands and collect Shines by achieving various goals. Whether you're playing tag with a rabbit, hunting down a key, or having Fury Bowser blow up walls, these will all unlock a Shine. In doing so, you'll provide light to a neighboring lighthouse and eventually activate the Giga Cat Bell.
The whole Bowser's Fury mechanic leaves little to be desired. He will spawn at certain intervals and raise havoc around the island. You'll take cover behind surfaces to avoid being blown up or use his flame to blow up walls. Plus when you activate the Giga Cat Bell, you'll evolve into a Gigamantax Mario and take on Bowser in a fierce boss battle. 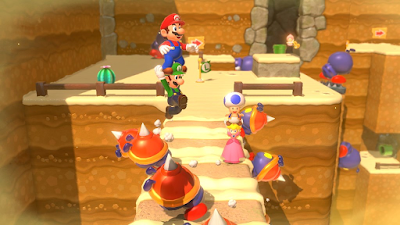 Audiovisual
Bowser's Fury doesn't feature the same tropical island climate of Sunshine. Rather, they're islands assorted by various level types. Ice, fire, wasteland, and even an arena are among the themes.
The visual aesthetic features enough cat references to last a lifetime. Speaking of which, you will surely fall in love with the island's cats. They'll run away from you as normal Mario, but use the Cat Suit power-up and you'll become their best friend. Their charming animations will surely win you over!
What I loved most about this game was the music. Much of the catchy tunes sound like they came right out of the SNES era. The bass lines for themes like Pounce Bounce Isle remind me of several tracks from Yoshi's Safari or a Kirby game. If you're a fan of 90s-era video game music, you'll fall in love with the tracks. If you love symphonic metal, then you will also love Fury Bowser's theme. 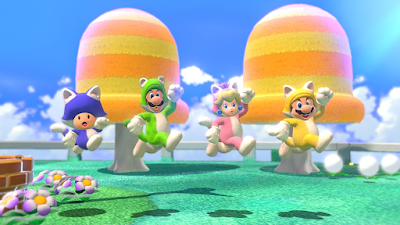 Extra
You can clear the mode's story with 50 Shines. However, full completion comes from collecting 100 shines. This will happen by unlocking more spots by collecting more shines. In turn, you can also warp around your map and discover their locations similarly to how you found moons in Super Mario Odyssey.
When you fight Fury Bowser again, he'll be white instead of red. His final phase will also involve a lengthier and slightly more challenging segment. Your postgame reward will also give you a normal-sized version of Giga Cat Mario, giving his Cat costume the trademark Super Saiyan hair from Dragon Ball Z. It's just a little extra incentive if you're feeling up to the challenge. Thankfully, it's by no means daunting nor terribly long. 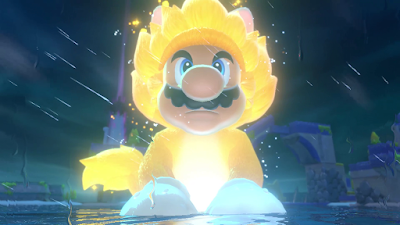 Final Verdict: Recommended
I found this expansion to be a wonderful return to Super Mario 3D World. Honestly, Nintendo could have probably just released 3D World without Bowser's Fury and it would have still sold off shelves just like every other Wii U Mario port has done on Switch. But for them to go the extra mile and combine 3D World and Odyssey together in a single campaign really shows the effort they put into Bowser's Fury.
That being said, remember that this is an 8-10 hour expansion to 3D World and not so much a "second game." If you're going to buy this game, I recommend doing so for 3D World. It's a fantastic Mario game designed by the team behind Super Mario Galaxy and one of the best games out there. Whether you played it before on Wii U or this is your first time, I cannot recommend 3D World enough as a whole.
I cannot say I ever preferred Odyssey's open-world approach to the standard platforming gameplay of Super Mario Galaxy and 3D World.  It's not perfect but it's still heavily enjoyable. Despite that, however, I will say by using 3D World's gameplay concepts with Odyssey's level structure, they created a memorable experience worth playing for any Mario. Definitely pick this up and try the Bowser's Fury mode!