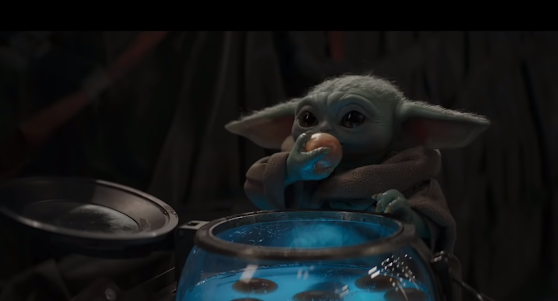 Just when you thought the controversies surrounding The Mandalorian couldn't get any dumber, we have EggGate! [Slight Spoilers for The Mandalorian Season 2 Episode 2 ahead.] In the second episode of season 2 of The Mandalorian our hero finds himself having to help transport an alien frog lady and her eggs to a planet so the eggs can be fertilized by her husband. We are told that she and her husband are the last of their bloodline so these eggs are really important and tasty according to Baby Yoda!
Yes, the lovable little scamp Baby Yoda decides to snack on some frog eggs during the episode and people on the internet lost their minds. Lots and lots of Twitter users voiced their displeasure that Baby Yoda was eating these "precious" eggs, but a quick search found many of them to be oddly Pro-Choice. It appears they are okay with killing unborn, actual, human babies but eating a fictional, unfertilized, alien frog egg is a bit too much for them.
Personally I am pro life and I thought the egg eating was hilarious. Baby Yoda just couldn't stop gobbling them down as Mando was trying to save all the butts. Seeing Mando having to divide his time between getting shit done and making sure Baby Yoda wasn't making for egg omelets was funny and truly relatable to anyone who has had to watch small kids while doing housework.
It's sad that many outlets like People and IGN are treating this like a real controversy. The Mandalorian is a show about fictional characters and sometimes some of them will do fucked up shit. Get over it!