Marvel Ultimate Alliance 3: The Black Order is an Action/Adventure hack-and-slash title developed by Team Ninja and published by Nintendo. Exclusive to the Nintendo Switch, this title features up to 4-player action featuring characters from the Marvel universe. The title can be purchased from Nintendo eShop or from retailers for $60 at the time of this writing.
The third title in this series features plenty of slashing, blasting and bashing across its expanse of dozens of memorable Marvel heroes, antiheroes, and villains. Everyone from Spider-Man to Captain Marvel, Wolverine to Venom, and Spider-Gwen to Rocket Raccoon have made their cut into the game's roster.
Following nearly a decade after the release of Marvel Ultimate Alliance 2, Team Ninja (Ninja Gaiden, Nioh) picked up the title for a new release. However, despite their stellar audiovisual performance and excellent gameplay mechanics in their own past titles, The Black Order seems to have fallen short.
While it delivers a strong premise given its superhero roots, you can tell it feels like a budget game as you play through the title. Despite its good intentions as a strong multiplayer title, this one falls short and opens up much better options on the console. But diehard Marvel fans and children will certainly stay occupied. 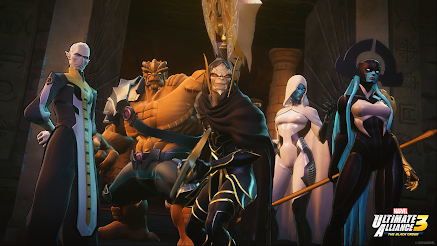 Story
The Black Order follows the Marvel superheroes' quest to stop Thanos, and his eponymous cabal, from obtaining the Infinity Stones. While the story is based heavily on past Marvel comic arcs, the 2018 release certainly seems to coincide with the release of the Marvel Cinematic Universe (MCU) films, specifically Avengers: Infinity War.
Getting to play as various characters, you can interact with NPCs. However, much of the story will be told through a few cutscenes in each chapter as you seek to obtain the Infinity Stones. It also discusses new isotopes, with similar designs to the Infinity Stones, which will play a major role in combating Thanos. For comic enthusiasts, it's nothing deep or amazing but a pretty standard comic adventure fanfare while getting to enjoy your favorite characters in action. 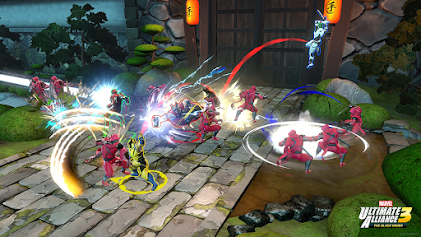 Gameplay
I generally enjoyed The Black Order's hack-and-slash combat. Unfortunately, I disliked that characters would not level up if you did not use them. This feels like a woefully dated mechanic that should have been abandoned many years ago. With that said, I largely stuck to Wolverine and a team of X-Men.
As much as I love Captain America, Venom, and The Hulk, I didn't find myself using them for long over my #1 favorite comic character. And the reason I kept a team of X-Men, like Psylocke, Nightcrawler, and Deadpool, was due to team synergy. Based on the characters you form in a team, you'll get various stat-boosts. This is all dependent on their team synergy which comes from the comics, so if they're X-Men, Avengers, New Avengers, Defenders, Antiheroes, Fantastic Four Reserve, and the like, they'll get points just for fighting together. Plus it helps to accentuate your team with various hit types, such as slashing, bashing, and energy projection.
Sadly, while the hack-and-slash action is good on paper, it offers little depth outside of some level design variety. It's simple and requires even less depth than, say, a Musou (Warriors) title. It hardly matters who you use as they're largely going to play the same with slight variances. Regardless of who you use, you'll come approach boss fights the same way: mash, dodge pattern-based attacks, rinse, and repeat. 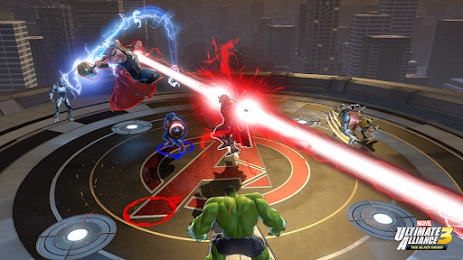 Audiovisual
Team Ninja is known for creating titles with both gorgeous art styles and beautiful animation. For this one, however, it was rendered in a cartoon style suitable for a comic book adaptation. Despite this, the hit detection feels undeniably lacking. It doesn't have the crunch one might expect from power hits. The only exception is when using team moves. The loud bang that pops feels ever satisfying.
MUA3's camera is another source of issue. The default camera feels zoomed away too far, similar to the past two games, which takes away from the immersion. You can fix it to get closer to the player but it only slightly heightens the level of depth and connection between the player and the game. Plus it comes with its own issues of obscuring enemies.
The music score isn't anything memorable but sets the stage for each level. Unfortunately, it's too quiet and inconsistent. It requires lowering the volume of the sound in order to even really notice it during gameplay. Several updates later and I'm surprised they still couldn't level it out at default.
The UI at least feels clean. Even though the developers shamelessly ripped off Nintendo's Smash Bros. series' character selection screen and unlocked character splash screens, it still feels inviting and intuitive. This may actually be the biggest highlight of the visuals.
Finally, it's worth mentioning the title has co-op for up to four players. This can work both offline and online. Unfortunately, the latter is useless at this point as you may never find a random room to join or for a player to join yours. Unless you're on an MUA3 chatroom or Discord, it's a moot point. 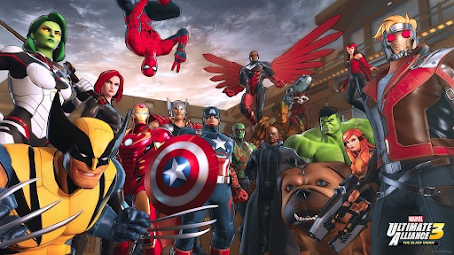 Extra
MUA3 comes with several DLC campaign expansions. It also features gauntlet challenges for the player. Doing these depends on whether you really want to invest time to get extra isotopes that are otherwise not even required to beat this relatively easy game.
If you watched the Marvel cartoons on Disney XD or played other Marvel titles, like Marvel vs. Capcom 3, you will likely hear a number of familiar voices. Coming from the latter, though, I'm sad Ghost Rider's voice didn't sound like it did in MvC3 and it sounded quite hollow in comparison. On the flip side, the game features a fair share of good humor especially with Deadpool in the mix. 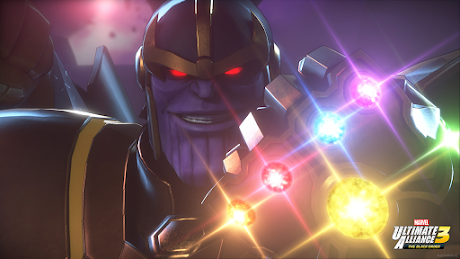 Final Verdict: Not Recommended
Marvel Ultimate Alliance 3 a mediocre title that offers a passable structure of gameplay. Kids, Marvel enthusiasts, and those seeking an alright hack-and-slash title will enjoy the game for what it is. Sadly, technical flaws involving the camera, lack-of EXP gain for unused heroes, and repetitive, woefully undeveloped gameplay might want to look elsewhere. The dead online also cripples an otherwise useful feature that would have made the game stand out a bit more.
I feel Team Ninja can do much better than this. Their studio creates some of the most beautiful visuals and effective sound effects from games like Nioh. The truth is I want a sequel to this game but I want it done right. Better camera, more development on enemies, deeper combat, more variety on playstyles among characters, and an incentive to use multiple characters. Do that and I'll give the next game a hot recommendation.