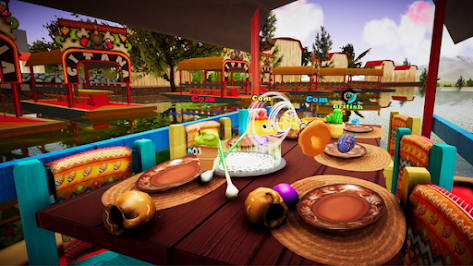 Lunch A Palooza is a 4 player brawler where the object is to be the last piece of food standing on the table. Each of the 8 different foods(Hamburger, Pizza, Sushi Roll, Ice Cream, Donut, Jello, Corn, and Meatball) attack in unique ways, with Jelly clearly the best food fighter in the game. There are some objects on the table, as well as power ups and traps, that you can use to try to knock your opponents off the table but rarely do any of these factor into the outcome of a match. 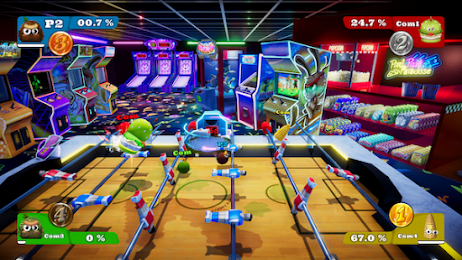 In addition to the standard knock your opponents off the table mode, there is a king of the mountain type of match, a timed random character melee, and a team match mode. The 6 different tables in the game all offer some unique gameplay elements like a UFO in the backyard table and a air hockey/foosball combo in the arcade level.
Unfortunately for this game, the controls are rather clunky and the character balance is way out of balance. As I said earlier, Jelly dominates the game with its projectile assault while Pizza ineffectually snaps its crust at opponents and Meatball throws itself off the table. This wouldn't be that much of an issue if the hit detection was also wonky. The AI isn't very good either and I was able to win several matches by simply not moving and allowing my 3 computer opponents to eliminate each other. If you want to see the game in action, I embedded a video review/playthrough below.
Final Verdict: Not Recommended!
This game looked to have a lot of couch co op potential but it didn't live up to any of it. The game is unbalanced so there will be no real competitive scene around it. The controls are clunky and hit detection is hit or miss so it won't even work as a get drunk and fart around type of game. The game is overpriced at $19.99 on PS4 but is nearly acceptable for $12.99 on Steam. If this game is on a deep discount, under $7, you may want to pick it up just for a few hours of goofing off.