Looking Back: The Legend of Zelda: The Minish Cap 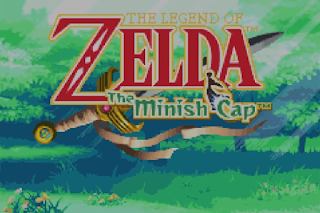 The Legend of Zelda: The Minish Cap is an Action/Adventure game developed by Flagship and published by Nintendo. This title was released for the Game Boy Advance in 2005. At the time of this writing, the title can be purchased via the Wii U Nintendo eShop for $7.99.
Developer Flagship originally developed The Legend of Zelda: Oracle of Ages and Oracle of Seasons for Game Boy Color. After handling the port of The Legend of Zelda: A Link to the Past Featuring Four Swords for Game Boy Advance, Minish Cap became their next project. As with its predecessors, The Minish Cap plays incredibly similar to A Link to the Past. However, it uses an art style akin to the cel-shaded character style used in The Wind Waker.
The Minish Cap allowed Link to shrink into a tiny being. Allowing him to enter small crevices, this became key to solving puzzles. Along with his new companion, Ezlo, Link's story took him across Hyrule to rescue Princess Zelda from the wizard, Vaati. Despite being a rather short and easy title, this was still a quality release for the Game Boy Advance. 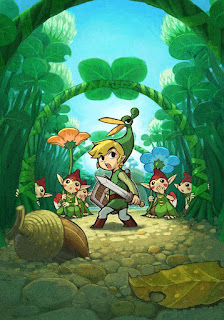 Story
I enjoyed the intro and how it echoed Wind Waker's prelude by using stained glass to tell of the past. Minish Cap starts off with Link sleeping and Zelda coming to get him so they can enjoy the festival in Hyrule Castle Town. Link's job, from the blacksmith, was also to deliver a sword to the King of Hyrule. If you've played A Link Between Worlds, you will immediately recognize where the opening originated from.
Vaati appears, petrifies Zelda, and the King gathers his troops to find him. While Link is sent on a quest to recover the elementals to power-up his sword, he meets Ezlo, the green hat. This new companion allows him to shrink into his minish form. All the while, Link will get to endure his banter, advice, and witty complaints.
It features a fairly basic Zelda story but, instead of Ganondorf, we have Vaati. The look into the lives of the Minish, or Picori, added a new layer of depth to Hyrule. You'll get to meet a ton of familiar faces, too, such as Malon, Talon, the Gorons, and more. It's a charming tale with a good bit of backstory and the cutscenes never takes up too much of your time between gameplay. 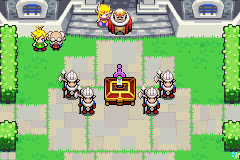 Gameplay
As with A Link to the Past and its 2D successors, Minish Cap features the familiar top-down action. Just like Link's Awakening and Oracles, however, you can equip two separate items to A and B if you so choose. You'll gain new abilities to help you solve dungeon puzzles and explore Hyrule.
Among these include the Gust Jar, Cane of Pacci, and Roc's Cape. I'm particularly fond of the last one because you can not only jump but glide in midair. Sadly, the novelty is extinguished all too soon as you'll only get to use it in two dungeons.
Akin to Zelda II and predating Twilight Princess, you can also gain new sword techniques from Swiftblade and his clan. Spin Attack, Pegasus Dash, and Sword Beam are all from past games. However, you can also learn abilities such as downward thrust and roll stab. Once again, I feel you get these abilities too late to really make use of them. However, your basic abilities of shield-blocking and rolling will help you throughout the game.
I enjoyed combat with enemies such as the Moblins and Darknuts. Similar to their appearance in Wind Waker, they're larger, tougher enemies that will block your attacks. Unfortunately, a quick exploit with the Pegasus Boots makes them all too easy. Along with taking too little damage, it's one of the main issues I have with the difficulty. On the flip side, at least the dungeon puzzles offer a standard level of challenge.
I should also mention that Minish Cap encourages players to fuse Kinstones. These come in multiple colors and shapes and can be fused with nearly any NPC in the game. Doing so will reveal treasure chests with many rupees or even open up secret paths. I found this to be one of the more enjoyable parts of the game and will certainly tack on time for completionists. 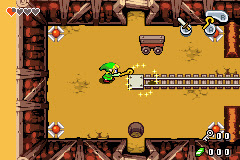 Audiovisual
As mentioned earlier, Minish Cap uses a visual style akin to The Wind Waker. The brightly-colored sprites add to the visual detail of the characters and the backgrounds alike. And thanks to its vibrant animations, daresay it's one of the best looking games in the series and a step-up from the style modeled from A Link to the Past.
I love how the variety of areas offers different thematics. Minish Woods feels mystic and even features a sunlight effect shining down from the trees. The Royal Valley is purple, filled with graves, undead creatures, and feels perfect for a Halloween adventure. The Zelda series has always managed to mesh its themes well with area design and Minish Cap is no exception.
The music was great too. I'm fond of various area themes as well as the remixes of Hyrule Castle and the overworld theme. Young Link cries out with every swing of the sword while Ezlo sighs and grunts in the face of danger. Even Vaati's laugh is just recycled from the Happy Mask Salesman from the N64 Zelda titles. The voice clips, music, and sound effects create a vast world in Hyrule that help build the little game into something bigger. 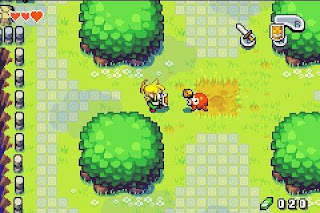 Final Verdict: Recommended
Overall, I think Minish Cap could have used one or two more dungeons. It takes half-a-dozen hours to complete. Plus, if enemies dealt out more damage, the challenge would have been balanced well. I find it even more pointless that the Mirror Shield could only be obtained from beating the game. That being said, it does everything else right.
If you enjoy 2D Zelda games and want to try another solid title, Minish Cap is worth playing. I beat it back in 2005 when it first came out and only recently replayed it. I feel like I enjoy this game more every time I beat it.
On the Game Boy Advance, it stands out among the rest of Nintendo's classics, like Metroid and Mario, and is just as much worth playing. I would definitely rank it in my Top 10 Game Boy Advance titles. While it's a shame that Minish Cap has sparsely had a proper re-release, Nintendo might have some plans for Zelda's 35th Anniversary. A re-release on Switch would introduce many players to another fine classic.