It's funny, every time Intellivision releases a new video it's 1 step forward and 2 steps back. The latest gameplay trailer from Intellivision features games we have never been shown by Intellivision before but, sadly, they have been seen before. How is that possible you ask, because the showed off several recycled games and passed them off as their own.
Now, to be fair, these games were not explicitly stated to be Amico originals but that was the implication of the video titled "Intellivision Amico - 10.10.2020 Gameplay update!" The description on the video goes even further by saying "Here is a quick look at a bunch of games that are currently in development for Amico and will be launched in Q2 of 2021.  Please note that nothing shown is in its final state and are all a work in progress." So, at the very least these are suppose to be games in development for the Amico, which would not be the same thing as games in the process of being ported to the Amico.
The first game we will discuss is Care Bears Care Karts. This is a 3 year old mobile game that was created by PlayDate Digital. The game was free on mobile devices but featured microtransactions. It is nice that Intellivision is taking a game that was popular with kids and stripping away all the microtransactions away, however it is disingenuous to try to pass the game off as something created for the Amico. Just like the Evel Knevil game, I am sure Tommy Tallarico will tell us that the game will have exclusive Amico content but that still doesn't excuse the fact that Intellivision is misleading the public by passing this game off as something original that was developed for the Amico.
Next up is Sesame Street and it is going to be a 4 for 1 deal. The first "game" is Sesame Street Count Me To Sheep and it is less of a game and more of a movie. The "gameplay" consists of you guessing how many sheep it will take to put Telly to sleep, pushing play, watching the Count do his thing, and finding out if you were right. That's it. The "game" is at leat 5 years old so chances are parents may have seen it on the Sesame Street website at some point.
The second Sesame Street game is Big Bird's Basketball. It is another 5 year old game but this time there is actual gameplay. You have to count the number of dots on the board above the backboard and then click on the basketballs with the number that matches the amount of dots.4
Next up is 6 year old Cooking with Cookie. Again, this isn't a true game as you mostly just listen and then move the mouse to do some basic actions like stir, roll, or cut cookie shapes. There is some choices that kids can make, like what shape or frosting to use but it is very limited.
The last Sesame Street game show is called Cookie's Cookies and it is a matching game where you have to help Cookie Monster box up cookies for his friends. In the footage shown by Intellivision it almost looks like it is 1 Cookie Monster game but in reality it is two. All four of these games can be played right now for free by going to the Sesame Street website. 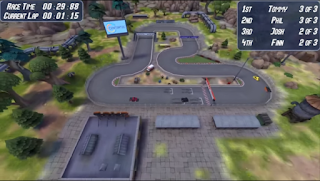 Besides these games being mobile and web game ports, Nitro Derby still has the Centertec logo featured in the gameplay footage despite Tommy Tallarico's insistence that the game would no longer be coming to that place. As always, feel free to share this if you found it interesting and follow us on Twitter and YouTube for more breaking news as we get it.