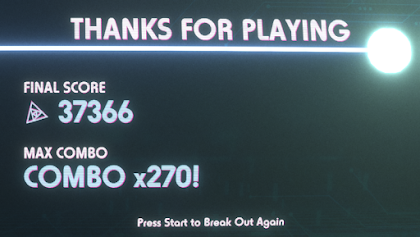 Intellivision just released a Breakout demo for the PC and I thought I would give it a spin and see if the game plays as good as it looks. While I find the demo to be fun, it is highly flawed. First off, there is no tutorial or instruction of any kind. This is not terrible, but not knowing how to exit the game(Alt + F4) can be a tad frustrating. It's also confusing, at first, as to what power up does what.
After getting the hang of the gameplay, things start to become too easy. Power ups are a bit too plentiful and powerful when used in the right combination. Being able to curve the ball adds some more depth to Breakout but it doesn't always seem to work when you try it and sometimes it does it when you don't. On my old PC the game ran fine but the paddle was a bit behind the mouse speed and that can throw you off if you don't learn to adjust. The level can be finished in under 3 minutes but there is no bonus points for completing it with unused balls or for any bricks not broken so it is best to try to use every ball and break every brick to squeeze out a few more points.
Overall the game is fun and if the full game has several levels that are equally as fun then it would be worth the $10 it is expected to cost. I'm not sure if this is the first level of the game or a level from the middle of the game so there is no way of knowing if power ups are all thrown at you from the beginning or if you are eased into them over the course of the game. It is a good demo, like I said, but almost shows that the Amico itself isn't needed as it plays just fine on my PC. I'm not a paddle snob obviously. That said, I will admit that if the full Amico line up is as fun as this game then maybe there might be something to the system after all but I guess we will have to wait and see. I'm not holding my breath.