The truth about crunch at CD Projekt Red

Infamous thin skinned "journalist" Jason Schreier recently wrote an article for Bloomberg titled "Cyberpunk 2077 Publisher Orders 6-Day Weeks Ahead of Launch." Like most of Jason's work, this is nothing more than a hit piece disguised as journalism. Jason uses an interview he himself conducted with Marcin Iwinski, CD Projekt Red co-chief executive officer, in June of 2019 as the basis for his attack. Of course, nowhere in Jason's latest temper tantrum does he mention this interview was conducted in a pre Wuhan Flu world.
Jason casually mentions that an unnamed staff member claimed that some employees were already working nights and weekends, for almost a full year, but didn't go on to specify which positions or if this was forced upon the employees. Jason doesn't even verify that this is true, simply related what he was told as if it were and willing to hide behind this unnamed employee should it be found out to be false.
Another thing of note is the fact that Jason didn't bother to reach out to anyone at CD Projekt Red for a comment. Weird considering they have been so willing to speak to him in the past. Maybe Jason was afraid his big story would fall apart or that there might be some reasonable explanation for this particular bit of crunch. 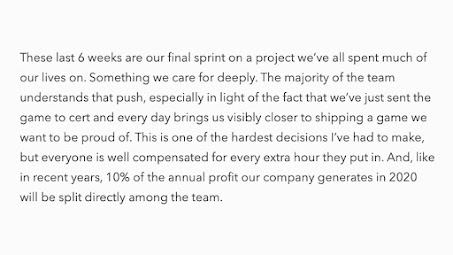 Lucky for us, Adam Badowski, the studio head for CD Projekt Red, saw Jason's article and left a comment on Twitter. As you can see the crunch time that is being implemented is a paltry 6 weeks of 1 extra day per week. CD Projekt Red is also paying their employees for the extra day of work on top of splitting 10% of the annual company profits for 2020 among the team. Not a bad deal if you ask me. A lot of salary jobs force you to work extra hours for no extra pay.
Working overnight is a very tricky issue. On one hand, you should never have to work more than your agreed upon schedule. On the other hand, many people enjoy the extra pay that working overtime gives to them and it is how they get themselves ahead financially. I've never worked as a video game developer, so I can't say how hard of a job it is but I have worked many labor intensive jobs that required me to put in 16 hour days, six days a week. I survived and I am sure the development team at CD Projekt Red will also survive.