Back in May a controversy surrounding the Harpies in Serious Sam 4 was brewing. People were showing images of an old version of the game to claim the Harpies were being censored. Their tits covered up by a feather bikini top type of design. I investigated the claims and was told by one of the developers that the images circulating the internet were of an old design, made for a video game conference, and would not be the look of the Harpies in the final game. Well, it seems the developer was only telling me half truths as the design of the Harpies in game were not like the ones in the images circulating around the internet but the ones they used would be censored after all. 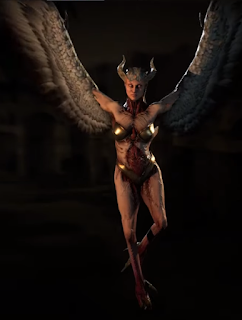 This image is taken from a video of Serious Sam 4 by Top gaming with Zameda1. As you can see the Harpies have their breast and crotches covered by a gold bikini. Not only are these characters censored in the game but they look very different from the enemies shown in the trailer for the game. Not only was I lied to but I was used to spread that lie to the masses. Since I am not the same kind of asshole as the one who lied to me I will not be outing my inside source at CroTeam but I will no longer be taking them, or anyone associated with them, at their word.
I apologize to anyone who bought this game thinking it would not be censored due to my reporting. I only hope you can get a refund. If you wish to stay abreast of all the latest news in gaming, to get in depth unbiased reviews, or to get tips and tactics from actual gamers be sure to follow us on Twitter and YouTube.