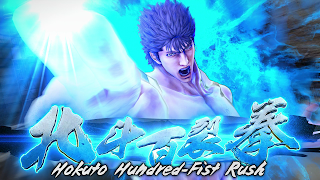 Fist of the North Star: Lost Paradise was developed by Ryo Ga Gotoku Studios, published by Sega, and released for PS4 in 2018. As an adaptation of the titular manga and anime series, known as Hokuto no Ken in Japan, I had to give it a shot. As both a fan of Fist of the North Star and RGG's Yakuza series, there was nothing stopping me from trying this title.
The title's premise involves the series protagonist, Kenshiro, living in the City of Eden. After defeating his sworn enemy, Shin, in a bid to rescue his fiancé, Yuria, he tracks her in the city of Eden. In this city, the game feels entirely like the Yakuza series with open-world exploration, mini-games, and all the silly animations and substories you could ask for. However, it crosses over with the source material by introducing the characters, like Souther and Rei, into the game.
Right now, I'm playing Lost Paradise before I start on RGG's other titles including Judgment and the Yakuza Remastered Collection. I fully intend to clear the series even if that means I'm late on getting Yakuza: Like a Dragon which comes out later this year.
With that being said, I'm enjoying it so far. It definitely runs on the same engine for the series prior to Yakuza Kiwami 2. It's inherently obvious by the 60 FPS but also how everything isn't shot in one-take such as entering shops and whatnot. The Fist of the North Star setting definitely adds prominent element to the series. For fans of both, it's even funnier when you realize how much the Yakuza series is inspired by Fist of the North Star even before playing this game. Not to mention they literally cast the Yakuza voice actors for this game with their counterparts. Kiryu as Kenshiro, Goda as Raoh, and even Haruka as Lin.
However, I think the game also takes a few steps back from the mainline Yakuza series. One being that you can't even run around the city. The other Yakuza titles let you dash around but Kenshiro can't get a spring in his step. To make matters worse, you can't even use a taxi or any such equivalent to quick travel around Eden. Plus, even with a small handful of quick travel points around the Wasteland, it still becomes a drag having to drive back and forth. Whether it's to learn from Toki or pick up treasure, it makes you not want to go out there at all sometimes. This doesn't bode well with the long loading times, either.
On that note, I will say I enjoy all of the Fist of the North Star elements. I love making enemies blow up using the Hokuto Shinken abilities. Combat is, as usual, the Yakuza series' strongest suit. Plus the well-written substories and bounty hunts always feel engaging. I'm especially fond of the mini-games like the bar one. Plus they brought back the hostess mini-game which I'll have to spend some time in. On the flipside, I will say this would be an easy introductory point for new fans of both Fist of the North Star and Yakuza to get into. That said, it also doubles as an incredibly solid manga/anime adaptation.
Right now I'm in Chapter 10. I'm not sure how far I have left. I fully intend to finish all substories as well as the hostess mini-game and fight Jo Amon, the typical superboss who appears in every Yakuza game once you've completed all tasks. I'm not thrilled about some of the stuff I've had to deal with, like Raoh draining an entire half of my bar during the fight and forcing me to restart the fight and watch all the QTE cutscenes again and again. Perhaps that's the price I pay for playing on Hard Mode, though.
As a Yakuza game, I feel the minuses come from some of the technical flaws regarding pacing. However, it's still a solid title that I enjoy. I'm looking forward to finishing the game and giving my final review. It's at least 40 hours long, though, which is pretty standard for the series. And that's not to include the amount of time I'll spend in the Gladiator Games, either.
Remember to Follow us on our social media links below to bring our latest quality gaming content with you!