A Look Back: Odin Sphere Leifthrasir 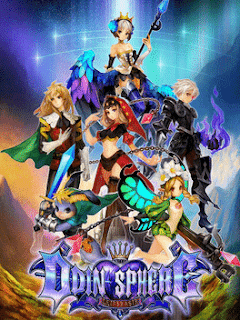 Odin Sphere is a side-scrolling hack-and-slash RPG developed by Vanillaware and published by Atlus. Originally released for PlayStation 2 in 2007, the game received a remake titled Odin Sphere: Leifthrasir, for PlayStation 3, PlayStation Vita, and PlayStation 4, in 2016. This remake overhauled every aspect of the game while keeping the original story intact. At the time of this writing, the game retails for $40 (physical) and $60 (digital).
Story
Odin Sphere follows the tale of five protagonists. In their bid to stop the Cauldron from destroying the world, these five characters must fight against fate, and even their own families, in order to prevent a cataclysm. Much of Odin Sphere's tale features coming-of-age tales where characters, such as Gwendolyn and Mercedes, must grow into their roles and lead their people.
The five characters have their own narrative but much of it intertwines. It's worth noting much of the game also features lore written within the in-game texts. Some tales are darker than others and watching others die will be part of the process.
Odin Sphere is a tale of tragedy, despair, hope, and romance. You will surely find yourself becoming attached to the characters and their struggles to free their homeland or overcome their inevitable deaths. Also, note that the game features a Good Ending when certain conditions are met. 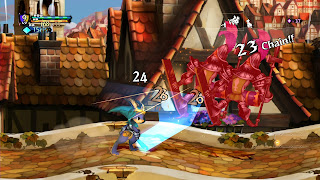 Gameplay
What I liked about Odin Sphere is that it featured 2D hack-and-slash elements with five different playstyles. Each story plays in order as opposed to other games featuring back-and-forth campaigns. I was particularly fond of Cornelius and Oswald since their swords allowed for traditional slashing. Velvet was also a case of an immensely broken character with her chains. I found Mercedes to be the hardest since she was forced to fight at long range.
The RPG elements include a skill tree of sorts. Pause the game and level up abilities using collected Phozons and Medals. I found it easy to keep up with since Passives took priority and I leveled up anything that dealt massive damage such as multihit strikes. The flexibility allowed for plenty of customization to the point of perhaps overwhelming OCD players, like myself, who might have had a hard time picking which attacks to level up during the first few campaigns.
I believe the platforming elements could have used more work. I feel they were placed there for formality. Because the game might become boring if it was just nothing but a flat, 2D plane, it might not be as enjoyable. Compare to games like X-Men Mutant Apocalypse where it's entirely possible to have a 2D platforming plane and beat 'em up elements.
You will also play through familiar levels through all five of the campaigns in Odin Sphere, albeit in a different order. At first, I was irked because I figured this was just a lazy way of recycling the game. It reminds me of Castlevania: Portrait of Ruin which recycled the backgrounds of stages but rearranged the layouts in order to create the last few stages of the game. However, I still found myself somehow enjoying the hack-and-slash combat, exploring the world, and discovering more of the story.
Odin Sphere runs on a linear path of stages. However, the stages themselves feel more like mini-Metroidvanias. Think Castlevania: Order of Ecclesia where, instead of having an over-arching world, each stage has multiple paths. These allow players to search for special attacks, recipes, items, and other bonuses. Mapping abilities to button commands felt like Super Smash Bros. and Namco's Tales series. This heavily streamlined gameplay and made the combat all the more satisfying. 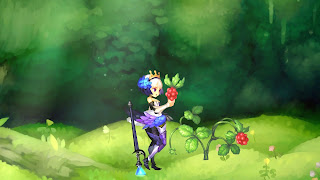 Aesthetics
I can not say enough good things about the audiovisual quality of Odin Sphere. Drawn by George Kamitami (Dragon's Crown), this game boasts some of the most beautiful sprite work and backgrounds in any game. It feels like an ageless classic, like Legend of Mana, where these hand-drawn works will look good, on any system, for many years. The animations, the detail, and the backgrounds just look so beautiful.
The soundtrack matches this stellar aesthetic quality thanks to Basiscape's work. Lead by Hitoshi Sakamoto, the lead composer is still well-known for his work at Square-Enix for Final Fantasy Tactics as well as its successors. I especially love the battle themes and everything else just sounds beautiful.
Minor Gripes
My only real gripe comes from the aforementioned progression. Once again, the game features seven stages with rearranged landscapes and boss battles. However, the difference comes from the characters you use and the story that changes with them. It feels more like an excuse to beat the game five times honestly. Despite that, the gameplay is incredibly satisfying with a suspenseful story preluding the end of the world.
I also found a mild issue with the later difficulty levels. Throughout Oswald's tale, I was still slamming enemies down without even trying. Then I came across a Bonus battle and only a few hits did me in while they were just HP sponges. Their A.I. didn't change and it felt rather unsatisfying as opposed to a smarter opponent or better enemy placement.
Final Verdict: Recommend
I recommend Odin Sphere: Leifthrasir for fans of its aesthetics, beat 'em up gameplay, and its fantasy story. It's honestly worth looking into the inspirations Vanillaware used for this game. Fans of fairytales and games like Valkyrie Profile will appreciate the supplemental reading material.
Despite being a 40-hour title, the one flaw that hits it most is the reason why. If it featured more original stages, I would certainly be more inclined to say it's definitely one of the hottest games I would recommend. With that being said, this beautiful adventure is easy to pick up and fans will certainly enjoy its charming story and characters.
Be sure to follow The Geek Getaway below for more gaming reviews, previews, and editorials. Did you play Odin Sphere or any of Vanillaware's other titles before? Let us know in the comments below!@