Story
As the protagonist, you are an exchange student attending Yasogami High School. Before your first day of school, you move to the backwoods region of Japan in the town of Inaba. You see mysterious things, such as visiting the Velvet Room and experiencing a vivid, surreal dream before your journey begins. You will stay at your Uncle Dojima's house. Along with his daughter, Nanako, you'll live your next year at their house while attending school.

The story revolves around mysterious murders in Inaba. Along with the homicides, the town's weather becomes clouded under a mysterious fog. Furthermore, you'll enter the Midnight Channel and pursue the victims of the TV world in order to save them from their shadow selves.

What I love most about the story is the writing and narrative. Your interactions with the characters, their backstories, and the scenes that flow in between are some of the best writing you'll find in a story-driven game. As with Persona games, you'll surely grow attached to the characters while solving the mystery of Inaba and its fog. Plus you'll encounter crises that involve facing one's identity, right and wrong, morally gray areas, and even existentialism. 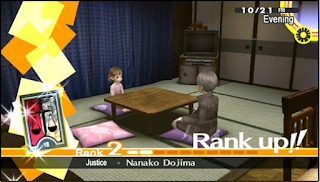 Gameplay
As a Japanese RPG, you'll fight battles in turn-based fashion. As the protagonist, you can switch your Personas to give you a different array of magical and physical abilities. Each of your party members will focus heavily on an elemental as well as a strength to buff your party. Unlike Persona 3 FES, you can set your party members to attack manually.

When you're not exploring dungeons, you'll be living day-to-day in Inaba. The calendar system means you'll spend days attending school, strengthening your social skills, and enhancing your bonds with the party members. Both are important, as well as intertwined, as these will help your comrades become more effective in battle. Plus, your bonds will awaken more strength in your Personas.

Audiovisual
As a native PS2 title, Persona 4 Golden features surprisingly detailed character models.  The visuals take many different aesthetics depending on the area. Whether you're in the haunting Hollow Forest, the flashy club dungeon, or the hilariously Dragon Quest-inspired game-themed dungeon, Persona 4 creates wonderful, varied thematics to suit the mood. Building off of Persona 3's engine, however, perhaps the most pressing change includes the UI which is both easy to navigate and aesthetically pleasing.

The audio of Persona 4 Golden, as well as the series, excels in terms of its music. Many songs will surely charm you and most of the standout ones are vocals. Composed by Shoji Meguro, you'll hear pop, rock, and smooth jazz throughout the game. I was especially fond of "Heaven," "Time to Make History," and "I'll Face Myself -Battle-."

Steam Version
One thing to note about the Steam version is the 4K visual upgrade and Japanese audio option. However, perhaps the most pressing change to the game itself comes from the ability to scale the difficulty. In addition to your standard difficulty settings, you can now scale your money and EXP from battles.

What makes this important is that you can avoid heavy level grinding. As mentioned earlier, several dungeons may have you grinding for an hour or two in order to take down a difficult boss. With this method, you should be able to enjoy a challenge without having to waste extra time leveling up. 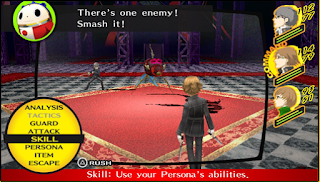 Flaws
Despite its wonderful pretenses, Persona 4 Golden is not perfect. You'll surely spend time grinding to fight several bosses in the game. Some of these grind points will surely wear your patience thin. Even if you buff and debuff bosses properly, you may still find yourself hitting a wall. Thankfully, unlike Persona 3 FES, dying means you can continue off the floor you died on instead of going all the way back to the title screen.

The side-quests in the game felt woefully pointless. You may find yourself running out of money frequently just to buy weapons/armor and survive the dungeon. In doing so, you might find yourself selling your side-quest items.

Meanwhile, to finish side-quests, you will surely be asked to re-enter a dungeon you previously cleared. This ends up being a waste of time as you can spend that time completing social links instead. I found NPC side-quests to be overall pointless.

Also, the dungeons themselves are quite bare bones. Much like Persona 3's Tartarus, they're all randomly-generated rooms with little more than a labyrinth design. The aesthetics change but the design does not. Rarely do they feature differences that encourage finding a key in order to move forward. For the Persona 5 fans reading this, please bear in mind that Persona 5 was the first title to introduce real dungeons with varying layouts and puzzle-solving. The Midnight Channel, as well as P3's Tartarus, set the ground for Mementos. 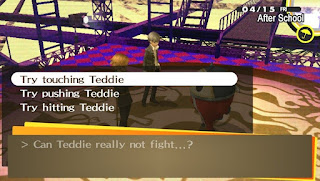 Final Verdict: Recommended
Overall, Persona 4 Golden, as its predecessor and successor, is one of the best JRPGs I've ever played. I became a Persona fan once I beat P5. Then I went to Persona 3 FES and loved it. All three games feature memorable characters, strong narratives, wonderful soundtracks, and fun, well-paced battle systems.  This 100+ hour JRPG is filled with fantastic writing, bonding with characters, and for dedicated players, you'll even get the option to watch multiple endings and replay the game on New Game+.

Persona 5 brought me to these wonderful games and I enjoyed them nearly as much. P4G's flaws feel more apparent if you're coming from P5. However, I can assure you that this title is wonderfully worth playing. Now that it's on Steam, you can also download it to your PC. We highly recommend buying the upgraded PC version over the Vita version.