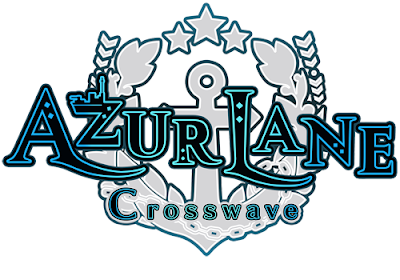 *Editor's note: We received a review copy of this game on the PS4.

Azur Lane Crosswave heads to Western shores on February 13, 2020. The game was developed by Idea Factory, Compile Heart, and FELISTELLA jointly. Idea Factory International will be handling the publishing.  It will be available on both PS4 and Steam. Both versions are priced at $49.99, however you can pre-purchase the Deluxe Pack on Steam, which includes 5 different PC Wallpapers (Each design is available in 1280 x 720, 1600 x 1900, and 1920 x 1080),  a 16 track soundtrack, and an Azur Lane: Crosswave desktop theme, for just $39.99. As of writing the game is not on the North American PSN store yet but there is going to be a 20% discount on the Deluxe Bundle for one week starting on Feb. 13th.


You can snag a physical PS4 copy for $49.99 from either the official IFI Store or Limited Run Games.There is also a Limited Edition on the IFI Store for $99.99. The Limited Edition features a physical copy of the game along with a steel game case, a “Nautical Debriefing” hardcover art book (96 pages), the official soundtrack (16 tracks), a Shimakaze figure, a 2 inch enamel pin set (Javelin, Suruga, Ayanami), a Sakura Empire standee (featuring Takao, Atago, and Yamashiro), a reversible cover sleeve, and a collector’s box. Buying either physical copy will also give you access to the Deluxe Bundle/Pack features via a code sent to your email address. The PS4 Bundle will have the soundtrack like the Steam Deluxe pack but it will also include 20 PSN avatars, a PS4 theme as opposed to the desktop wallpapers and theme, and 2x DLC: Shiranui's Prized Goods Release Sale & Operation EXP Boost. Additionally, a free Neptune DLC Kansen will be available for 1 month after launch.
Azur Lane Crosswave takes place in a world where famous warships are cute anime girls called Kansen. The four major nations of this world are the Eagle Union(US Navy), Royal Navy(British Navy.), Iron Blood(German Navy), and the Sakura Empire(Imperial Japanese Navy). Azur Lane Crosswave's story mode focuses on two Kansen from the Sakura Empire, destroyer class Shimikaze and battleship class Suruga. As new recruits Shimikaze and Suruga are treated as juniors by the other Sakura Empire Kansen and you get to watch as these two grow and rise above their rookie status throughout the story campaign. Without spoiling too much, the overall focus of the game's story, aside from the two Kansen mentioned, is the 4 nation joint military exercise being held in Sakura Empire waters. As the story is the best part of the game, I am going to leave it up to you to discover the real reason behind the joint military exercise and just who those two evil looking girls in the gif above are. 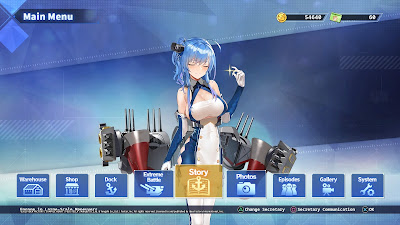 Azur Lane Crosswave advertises itself as a 3D Action Shooter but the game is closer to a visual novel with 3D action shooter battles sprinkled in. The main story mode features lots of reading between each battle segment and, depending how fast you read, you could have 10 to 15 minutes of exposition before you get to play another short 2 minute fight. Yes, just like the mobile game it is based on, most fights in Azur Lane Crosswave will be under 2 minutes in length! Extreme Battle mode makes up for this a bit by having you fight a series of battles one after another but even that mode is bogged down by being forced into the menu screen between fights. If you rather read than fight, well the Episodes mode will give you a chance to get to know some of the cast a bit better through dialogue scenes. 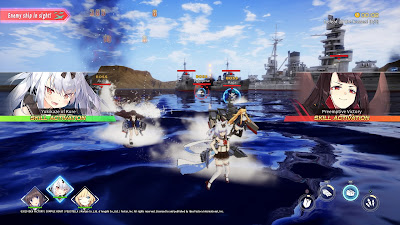 Battles in Azur Lane Crosswave find your fleet of 6 ships(3 playable and 3 support) facing off against other Kansen and "mass produced units." These mass produced units are nothing more than standard ships and planes. As I said before, most battles are over in under 2 minutes and offer little to no challenge. You can upgrade your ship's abilities, equip better weapons and accessories, and form teams based around the bonuses certain teams give you if you want an advantage in battle but none of that was really necessary to beat the majority of fights in this game. All the ships play in a similar manner, despite there being several classes, so you can just pick your favorite waifu and unload hell on your enemies. If you are able to get your affection level high enough with a Kansen you can propose to them to upgrade their special ability but again it really isn't necessary to beat the game. 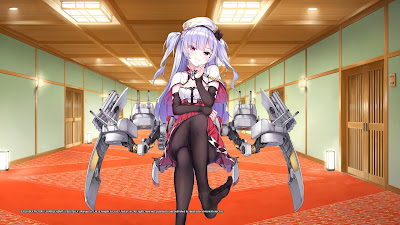 Azur Lane Crosswave features stellar Japanese voice acting with subtitles in English(English, Chinese and Japanese on Steam). The music and art in this is is also top notch. I should note, I was a bit disappointed that the Kansen were forever stuck in a single pose. With a Kansen of just about every variety, sorry chubby chasers nothing for you guys, finding your favorite is going to be pretty difficult. The animation on the battle sequences are a bit odd, with your Kansen seemingly floating above the water, but you will hardly notice it unless you play around with the Photo mode. In Photo mode the limited poses, lack of outfits, and odd floating really drags the experience down. 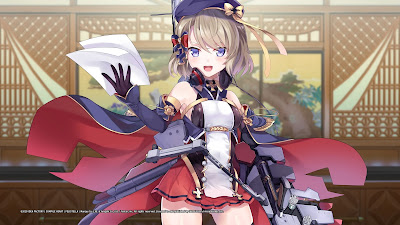 Final Verdict: Not Recommended
This was a real tough one for me as I do really love the story and visuals of Azur Lane Crosswave. The short easy battles coupled with the $49.99 price tag were really the nails in the coffin for this game. Had it been priced around $25-$30 I would have said there was some value in it but I am hard pressed to recommend it at full price. The game shows a lot of potential and I hope IFI comes to their senses and makes a Dynasty Warriors styled Azur Lane console game instead of a sub par mobile on console game like Crosswave.