Posted by TonyTGD on June 26, 2020
Written by Kenny G of Dorkalicious

Warborn is a tactical role playing game made by PQube that invokes a lot of “90's anime vibes”. The game mashes together classic tactical RPGs (like Advanced Wars or Final Fantasy Tactics) with Gundam-style mecha (called Variable Armour) to tell the tale of inter-stellar political strife. 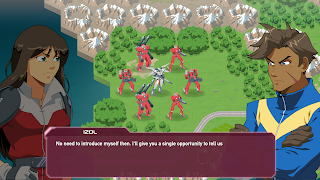 Right from the title screen, you are immediately thrown into a “mecha” style anime as the character Luella Augstein (one of the game's protagonists). Luella sits atop her Variable Armour “Diety”, and energetic music picks up to make you feel immersed in the experience. The game nails this feeling so well, you'd almost expect an anime intro to start rolling...unfortunately there isn't one.

Over the course of the 20 hour campaign, you assume the role of 4 different commanders. All commanders are fighting on different sides of a war taking place in the Auros system. Each set of missions (around 40 in total) is about 5 hours in length, and take place sequentially one after the other, as the stories bleed into each other. 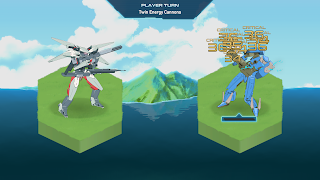 As far as gameplay goes, it plays similar to most tactical RPGs and doesn't stray too far from the formula. There are about 10 different styles of Variable Armour introduced over the course of the Luella campaign (Norad Faction), but unfortunately after her campaign, we don't see many new mechs introduced. Each faction is mostly just a pallet swap, with the exception of each factions “Commander Mech”.

Commander Mechs are extremely powerful units that are the “hero” unit of your army. They can easily “turn the tide” in many exchanges with the enemy. These units are usually present at the beginning of missions. There are times when you must build up “commander points” in order to deploy your hero unit, and then summon them to the battlefield. Additionally, these hero units gain “buffs” as they level-up throughout the campaign. 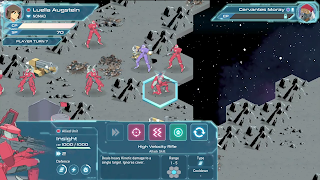 Over the course of the first few missions, you are introduced to the concept of capturing resource points and outposts. At these outposts, you can summon new Variable Armour using resource points. As you progress through the campaign, you will gain access to more mechs that you can summon at outposts on the battlefield. Each mech has its pros and cons; for example, artillery mechs and sniper units hit hard but move slow, while lite mechs move significantly quicker, but don't pack quite the same punch. The movement speed of mechs does become an issue, (as differing terrains can make a significant impact), making fast units necessary to reinforce your front lines.

There are some missions that do require you to leverage your unit's special abilities. One mission that stood out to me in particular was the tactic of using several scout units to scan for mines, while leading your squadron into an abandoned base. Then, proceeding to secure said base by having to defend it from the pursuing forces. In this scenario, the scout was extremely effective; dropping artillery units meant we could pick off enemies easily as they approached our base. While some missions definitely allow you to leverage the different mech types, you may eventually hit a point in the campaign where pumping out fast moving mechs is more effective then building stronger units. When dropping new units at outposts (that are often a distance from where combat is occurring), by the time heavy units reach the combat area, fast moving units have already cleaned up the enemy platoon. This play style becomes viable, partly because you can summon so many lite units, and not care about losses, thus rushing the enemy often becomes more effective.

Some feedback to the developers (if there is a follow up to this game), would be having pilots you manage yourself, so you are not so frivolous in throwing away lite mechs to quickly close the distance between yourself and the enemy. 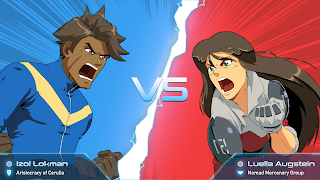 The game also has an offline skirmish mode where you can play against enemy AI, a map builder where you can create your own battlefields, and online multiplayer where games play out (like the offline skirmish mode). Online battles generally favor whoever has the better understanding of tactics and effective unit compositions (which is appropriate).

The visuals of the game are mostly split between the visual novel-style story sequences that play out between missions, and the very clean looking mecha battle fields. 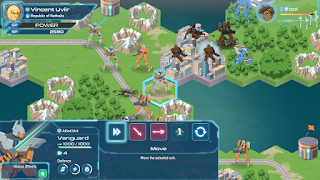 On the battlefield, mechs look clean, and draw inspiration from Gundam and other 90's style mecha anime (like Full Metal Panic and Nadesico). The hero units stand out with their impressive visual flair, while most other army units blend together, and you really have to look closely at what their holding to know which unit type they are. Every attack has nice imagery that plays out, to help make you feel immersed in combat, (some more impressive then others). The appearance of the hero unit attacks really stand out. Battlefields are laid out in a hexagonal grind that is similar to other tactical RPGs. This may remind you of BattleTech (if you are a table top gamer).

The one negative I will say for the visuals is there is no battle damage to speak of. Everything is very clean, but almost too clean at times. It would have been great to see the units with indications of bullet damage, slash damage, or even rust, as these mecha are weapons of war. If units carried over from mission to mission (they don't), it would have been interesting to see them become more and more beat up, and require maintenance to fix their appearance. 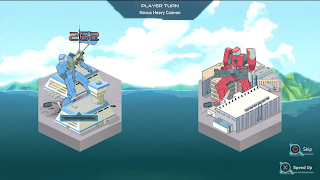 The audio may be where this game really shines; there is a decent variety of high quality music assigned to each faction, as well as additional music based on different situations that are playing out on the battlefield. Even after hearing some of these tunes for quite some time, they still feel great and never wear on you. Most tracks fall right in with that 90's theme running throughout the game.


Final Verdict: Recommended
I recommend this title for those looking for their fill of retro anime mecha ,combined with the gameplay of “Advanced Wars”. The game's audio and visuals combine for a great throw-back to the 90's, when mecha animes were everywhere. Gameplay is fun, but may wear on those who are not into traditional tactical RPGs. Warborn doesn't stray to far from the formula used in other tactical RPG's, so if you're a fan of the genre, you may find this right up your alley! If not, there may be better games to introduce you to this genre of games.