Test Drive: Trials of Mana for the Nintendo Switch 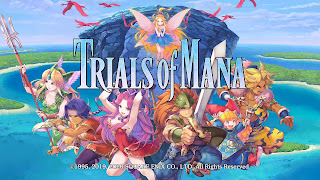 Square-Enix's recent console release, Trials of Mana, features a remake of the SNES hack-and-slash JRPG. Dubbed "Seiken Densetsu 3," the 1996 title officially remained in Japan until the recent compilation, Collection of Mana, included a full translation of the title.


Released only a year after the compilation, Square-Enix opted to remake the title as they've done with previous entries in the Mana series: Adventure of Mana on Mobile devices and the Secret of Mana remake. Unlike the previous entries, however, Trials of Mana ambitiously sets out to be a full 3D experience. With that said, I wanted to explore the demo, from the Switch eShop, and give you a quick rundown of the game.

What's new in the remake according to the demo?
This title includes new battle mechanics such as dodge rolls and combos. You can launch your enemies upwards with juggle attacks. Plus, with partner switching on the fly, it feels like a slew of quality of life improvements helped improve the battle's flow. This 3D remake also introduces jumping and full voice acting.

Aesthetics
Trials of Mana on SNES was known for its peak JRPG art style. This style, also used in The Legend of Zelda: A Link to the Past, Final Fantasy, Secret of Mana, and Chrono Trigger, these bright colors and designs paid special attention to detail in animation, backgrounds, and even lighting. Trials of Mana may be the pinnacle example of this visual style.

However, the remake feels more like a lackluster, passable-at-best look. The art style looks fine for characters and environments, but never looks striking or gorgeous.. If I'm being honest, and I'll use this comparison several times, it fails in visual attraction. It looks nothing like other, beautiful aesthetic titles such as Kingdom Hearts III or even Ys VIII: Lacrimosa of Dana.

Nothing really stands out more than the characters themselves. Their weak and occasionally jittery animations feel nonsensical. Even the innkeeper, known for his dancing, doesn't feel as lively as in the 2D games.

Plus, one prime example of poor NPC design I noticed was with the beastkin in Jadd. Minus hair colors, they all look the same. Trials of Mana took the designs out of the SNES era where similar sprites for NPCs were a passable attempt. In today's era, there's no question the designers got lazy rendering NPCs.

Gameplay
Trials of Mana's battle system features a real-time hack-and-slash with JRPG elements. You'll unleash combos, cast magic, and even gain the ability to jump. If you played with Square-Enix's famous series, Kingdom Hearts, you may be quite familiar with this battle system already. However, it lacks much of the luster, speed, and finesse of the latter's energy. It paces slower in comparison and nowhere near as exciting.

For the record, this has nothing to do with the Switch version's 30 FPS. Regarding the game's feel, I've played faster and more engaging titles in the past. Trials of Mana's movement felt sluggish in comparison.

Audio
The sounds in the game vary. On one hand, it's charming to smack around enemies and hear classic Mana jingles from the original games. On the other hand, it's blatantly lazy to the point you can tell the music was more or less sampled straight from the SNES title. The voice acting as well feels utterly lifeless and, dare I say, cringy at times.

As someone who already found Charlotte's dialogue obnoxious in the localization of Trials of Mana (SNES), I feel very glad that Square-Enix let you switch to Japanese voice acting before I met her. I might have wanted to quit the game then and there. Just because the voice actors themselves are talented does not mean the director made the best decisions with their actors. For 2020 standards, this sounded like late-90s gaming quality at best.

How it feels as a remake
For what it's worth, Square-Enix does a fine job of being generous with their demos. As with their Octopath and Bravely Default II demos, you get several hours of play from the game. Plus, you'll get to carry over your save content to the full game. In particular, you can play through the first 2 hours of any character's story.

Unfortunately, as someone who beat the original Trials of Mana recently, I could not wait to end this demo. Despite being a remake, this game almost feels like a 1:1 conversion of the original game, but in 3D and with combos. Compared to reimaginings, like Final Fantasy VII, Resident Evil 2 and 3,  it feels barebones.

Furthermore, even compared to more direct remakes, like Yakuza Kiwami, it seems to lack any sort of content to differentiate it from the original game. The only reason to play the remake would be due to the animated characters, speed of battle, and the ability to use combos and dodge rolls. Other than that, it's mostly the same as the original. Unless you're looking for that fresh 3D experience or never played Trials of Mana before, you're more or less playing a conversion of the original title.

Final Thoughts
All in all, I thought Trials of Mana was good at best. Not great by any means and still heavily flawed, albeit better than its predecessor, Secret of Mana. I honestly found Final Fantasy Adventure (Seiken Densetsu, Game Boy) to be the best game of the series due to its level of polish and pacing.

Trials of Mana seems like a good hack-and-slash JRPG to play if you've never played a Mana title. But to be quite honest, in terms of visuals, audio, pacing, gameplay, and dialogue, I would not recommend it over a more polished title like Ys VIII: Lacrimosa of Dana.