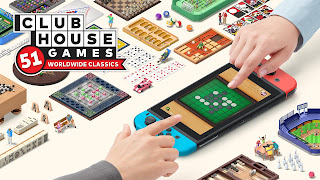 Clubhouse Games is a tabletop party game released for Nintendo Switch in June 2020. Originally released on Nintendo DS in 2006, Japanese developer NDcube made a follow-up 15 years later. Known for the more recent Mario Party titles, the Nintendo-owned subsidiary has proven its mettle with nearly two decades worth of party game experience.

I went ahead and tried out the demo for Switch. It features four games you can play: Four-in-a-Row (Connect 4), Dice, President, and Slot Cars. Each game features different A.I. difficulty levels and can be played via local multiplayer with multiple Switch consoles. Slot Cars even adds a feature where you can connect Switches together, in handheld mode, to create a Slot Car track. This hardware connectivity echoes a feature in NDcube's 2019 title, Super Mario Party.

What I especially love about Clubhouse Games is its sheer level of polish. The seamless animations accompany the smooth controls. The game will help you select your card or domino picks using the cursor as a guide. Plus the tutorials feature concise details without feeding you too much information. It's incredibly easy to pick up and play for anyone. You can even watch some charming scenes play out in the tutorial videos or choose to skip them altogether.

The four games also offer notable diversity. Three of the four games involve puzzles or cards while one plays in real time. Having played Slot Car games in both Nintendo 3DS and the Yakuza series, it felt nice getting to control my car. The interactivity feels spot-on when you accelerate and try to avoid crashing from turning a corner too hard. Also, playing the games on Switch handheld makes for a perfect barrier to conceal your dominos or your card hand.

Right now, I'm strongly considering picking up this title. If you have friends that love to play board and tabletop games, you already have the perfect purchase right here. You can play locally or even online with several of the games. It makes for a complementary addition to Nintendo's already stellar lineup of Switch multiplayer titles. And in doing so, it offers a pleasantly refreshing experience to the table. You can view the trailer for the game below.