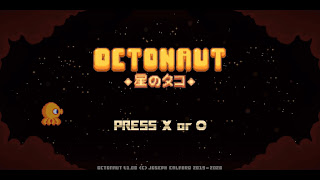 *The Geek Getaway received a review copy of Octonaut*

Octonaut was originally released in 2019 on Steam by developer and self publisher Joseph Calabro. It cost just $6.99 at the time of writing this review. Thanks to Eastasiasoft picked up the publishing rights to the game and it is set to launch on Nintendo Switch, Xbox One, and PS4 soon(the launch has been delayed) and should retail for the same price on their respective store fronts. 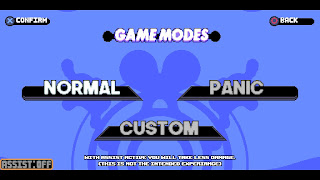 Octonaut has 3 game modes, Normal, Panic, and Custom. Normal mode is available from the start but you must beat the game to unlock Panic Mode and Custom Mode. In normal mode you start off with a life counter(shield) of 1000 and the basic small shot. In Panic mode you have a barrier(shield power up) that can take 1 hit before dissipating and die if you are damaged after you lose your barrier. You start off with the basic small shot in Panic mode too. Custom mode allows you to adjust the speed of gameplay, your life counter, what stage you start on, whether or not you start at the boss, and which weapon you start the game with. Additionally their is an Assist mechanic that cuts the damage you receive in half that you can toggle on or off before you start your game. 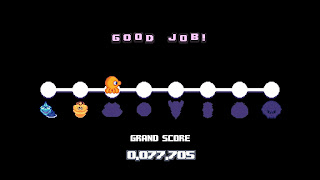 Gameplay in Octonaut is your standard left to right shmup with a few twists. As I said above, during normal play you have a Life/Shield counter that goes down as you crash into the terrain, enemies, or gunfire and goes up when you gobble down a piece of cake. The second twist is a dodge button that sees you retreat into the background to avoid damage but is on a refresh timer so you can't spam it. The last twist is the gacha mechanic to power ups where you are never quite sure which one you will receive from a toy capsule. In my original playthrough of Octonaut I never encountered several of the available power-ups and only learned about them from the Custom Mode menu.

You do not automatically switch to the new weapon, rather you have to manually do so by pressing square. This allows you to keep the weapon you like while also trying for one you like better. The power-ups themselves are an odd assortment. For weapons you have a small shot, a big shot, a flamethrower, a piercing shell type bullet, a laser beam, a 3 way small shot, a shotgun blast, an arcing bowling ball, a yo-yo, a boomerang, and a plasma cutter. There is also a barrier(shield) power-up that protects you from 1 hit and n invincibility power-up than makes your octonaut spin like a ballerina as it flashes. 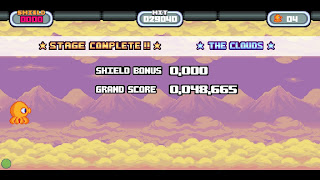 There are only 8 levels in the game and each one can be beat in 6 or so minutes if you play the game well. Most gamers who have a little shmup experience should flip the game in under an hour. Custom Mode does little to add replay value as getting extra life is pointless when you already beat the game at 1000 Shield. Lowering the Shield adds a bit of challenge to the game but that's pretty much Panic Mode's entire gimmick. The only real replay value Octonaut has is trying to go for a higher score than you previously achieved. Sadly, the game does little to keep you coming back to do that. 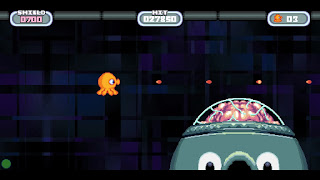 The music and sound effect in Octonaught are top notch, it is just a shame that the levels are not longer so you could enjoy the sounds of each stage more. The boss fights are also really good, with the exception of the last boss, and there were a few moments that I almost thought I would die. If you should die at a boss you don't have to play the stage over again, rather you simply start off at the beginning of a new boss encounter. In my opinion this would have been good to include as part of the Assist feature rather than having it as the only way to play. 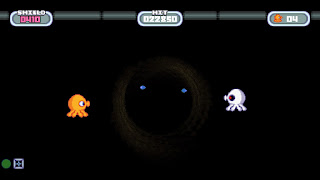 Final Verdict: Not Recommended
Octonaut is a well done shmup with catchy sounds and a cutesy style but is far too bare bones and short to justify it's $7 price tag. Octonaut would have been worth the cost several years ago but in the time we live with free mobile games of similar or better quality, not to mention the abundance of cheaper games on the market, I can't really see myself saying the under an hour of gameplay is worth it. If you a fan of shmups and are looking for something to play, you might consider Octonaut but fo the majority of you I suggest spending your money on something with a bit more meat on its bones.