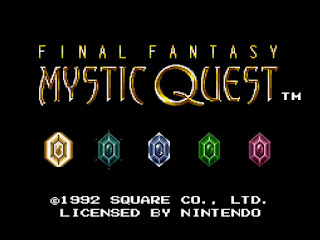 [Editor's note: This was originally writen and posted on 3/7/2017]
Recently, as I was perusing some YouTube channels, I ran across a video trashing the game Final Fantasy Mystic Quest. Now, I won't try to tell you that it is the greatest game ever, but by no means is it a horrible game. In fact, it's a pretty good game. The reasons that this game gets so much hate is right there in the name... Final Fantasy. You see, what you need to remember when playing Mystic Quest is that it isn't intended for RPG veterans or hardcore Final Fantasy players. On the contrary, this game is an entry point into the genre, letting RPG virgins get their feet wet before diving into a full fledged title with all the bells, whistles, and hundreds of hours of gameplay. Had the game been released simply as Mystic Quest, dropping the Final Fantasy from the title, I believe it would be viewed by more people in the same manner as I view it. 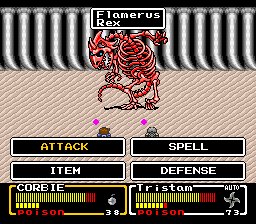 The game places you in the shoes of Benjamin(or whatever you name him): an adventurer who is climbing the Hill of Destiny. During his climb, his hometown is destroyed in an earthquake. Despite wishing to return home, he is met by a mysterious Old Man who tells you that you must fulfill the Prophecy of the Knight. You are therefore charged with finding the Four Elemental Crystals and restoring the power of the Focus Tower. As you travel the world, you meet various quirky characters and adventurers (some of whom will join you in battle, of course). Although nowhere as deep as modern RPGs, the story keeps your attention, doesn't bog you down with tons of named npcs, and doesn't require you to learn intricate back stories of everyone you meet. Streamlined and simple is the way the game treats story, travel, and battle. 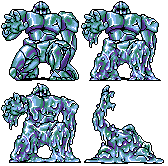 One of the coolest features in this game is the way enemy sprites (which are huge) change to reflect the damage you inflict on them. Goblins gain scars. Ice Golems slowly melt. Giant bone monsters lose bones until they are nothing but a pile of dust. This feature alone would make combat in newer rpgs several times better. Could you imagine playing Skyrim and the dragon you're fighting slowly losing flesh and blood as you attack it? The main Final Fantasy series as a whole would be better off if they adopted this unique feature, instead of using the tired mechanic of monsters disappearing when they are dead. Mystic Quest was also incredibly entertaining the way it let the player use weapons outside of battles. Swords can push switches, axes chop down trees, and a claw can be used like a Legend of Zelda hook shot. Each one is added just when you start to get bored with the previous one so you're never left feeling underwhelmed by upgrades. 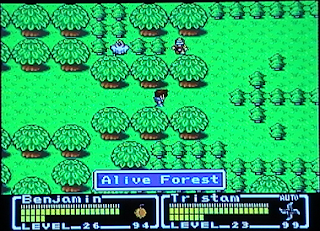 You might be thinking, "This guy likes the game... but he doesn't seem to love it." Well, I've been holding back a little. You see, I have always considered myself an RPG player first and foremost. RPG, JRPG, Tactical RPG: if it was remotely RPG, I played it. My love of the genre is so vast that I've played Beyond the Beyond, SaGa Frontier, and Vandal Hearts to completion. For those who haven't played them... they are all decent if not flawed games!

The truth is, I was introduced to the RPG genre by this game. Without this game, I wouldn't be the gamer I am today. You see, this game set out to lure kids into a genre that was seen at the time as extremely long, difficult, and too complicated for anyone who wasn't a hardcore gamer. Final Fantasy Mystic Quest gives RPG beginners strong basics and a new appreciation for the RPG genre without bogging them down in menus and complicated leveling systems. Any game that generates new love beyond basic platformers and shooters can't be all bad. This is why I love Final Fantasy Mystic Quest and why you should too! As always. feel free to comment, like, share, tweet, or whatever other thing you kids do on your social media these days.

*All images courtesy of Square Enix