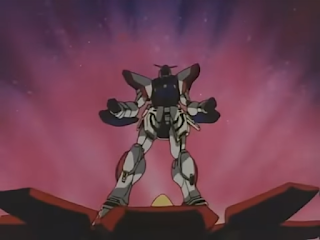 First off, I know we commonly refer to Japanese animation as Anime these days, but I prefer the older and much more accurate portmanteau Japanimation as anime actually refers to all animation not just Japanese animation as many Westerners wrongly believe whereas Japanimation is a literal combination of the words Japanese and animation. With that said lets talk about one of my favorite Japanimations, Mobile Fighter G Gundam or simply G Gundam if you are into that whole brevity thing. Side note, I have no idea what the first G in G Gundam stands for so if you know please drop me a comment.

I would also like to warn my readers that might be interested to check out G Gundam, there is a lot of things that I don't mind about G Gundam but some of you may find those things "problematic." The main issue many have with G Gundam is that almost all the gundams in this show are created as an homage to stereotypes about various cultures. For example, Spike/Tequila Gundam wears a sombrero. While some may see it as mocking or belittling another culture the show never directly mocks or makes fun of other cultures for the designs of their gundams. I, as many fans of the show do, believe each gundam was based on stereotypes to both celebrate the uniqueness of each culture as well as to make it obvious from a single glance where each gundam was suppose to originate. Okay, enough of that disclaimer garbage. Let's talk about G Gundam! 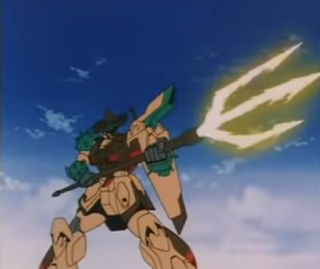 So, what is G Gundam and why do I love it so much? Well, to put it simply, G Gundam is the Olympics mixed with giant robots infused with Dragon Ball Z and topped off with awesome music. Gundams or giant kick ass robots/mecha from the space colonies that orbit the Earth, although the colonies all the gundams are from are based on actual countries/regions of the real world and are not as fantastical as you would hope, compete in a winner take all tournament for control of the galaxy!

As awesome as that sounds, it actually takes a back seat to the sage of G Gundam's main protagonist's, Domo Kasshu, search for answers as to what happened to his older brother and the mysterious Devil/Dark Gundam. Over the course of the series Domo, Neo Japan's pilot of Shining Gundam, meets pilots from other colonies and reforms the famous Shuffle Alliance as a way to stop the Devil/Dark Gundam. I won't give too much away, but just know the "revelations" are nothing too groundbreaking and I'm sure you will guess the twists and turns long before the show spells it out for you. In my opinion the story isn't that good, although it is interesting enough to get you to watch the episodes in order, but when you have two giant robots engaged in one on one smack downs you really don't need a story to watch. 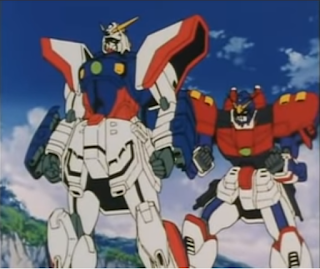 As a child of the 80's/90's I grew up on movies with tons of action and G Gundam delivers a heaping helping of action packed robot battles that satiates my need for violence. The battles in G Gundam play out more like a Dragon Ball Ball Z fight than anything you might see in a typical giant robot/mecha show. Each gundam has special abilities, tricks,  and super moves, that they scream out while performing just like in Dragon Ball Z, that keeps the action fast and frantic which is a stark contrast to the slow plodding fights in shows like Voltron or previous, but not later, Mobile Suit Gundam series.

While the story may not hold up to the standards of today, the action is still top notch and will have you screaming Shining Finger as your partner gives you a worried look. I know this wasn't a real "review" but more of me gushing about something I really like so you can learn more about Mobile Fighter G Gundam on its Wikipedia page or you can check out this review done by Bennet the Sage, although it's not a great review. As always. feel free to comment, like, share, tweet, or whatever other thing you kids do on your social media these days.