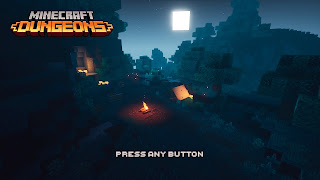 After watching Vara Dark play some Minecraft Dungeons on her YouTube channel, I decided to pick the game up and give it a try. Well, I am glad to say that the game is every bit as fun as Vara made it seem! The game is such a blast to play that it has quickly become my go to game when I have a few minutes of downtime to myself.

Now, if you have no idea what Minecraft Dungeons is I will give you a quick summary. Minecraft Dungeons is an action game with some very basic RPG mechanics. You equip your character with a melee weapon, a ranged weapon, armor, and up to three artifacts. All gear items have stats and potential enchantments while the artifacts simply have differing stats. With each level your character grows you are given 1 enchantment point that you can use to unlock the potential of your gear. 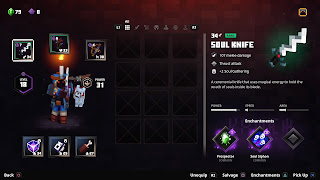 Despite such a basic setup, there is a lot of room for varying builds and play styles based on gear and artifact combinations. Additionally, since potential enchantments are random there is further room to play around with builds based on your favorite looking armor or weapon. The ability to salvage items and get your enchantment points back means you can test out new builds with little worry.

The local multiplayer is also a huge blast to play and me and my teenage daughter have been tearing through dungeons almost every day since I bout the game. Online multiplayer is just as good if you have someone decent to play alongside. With an adjustable difficulty based around your personal or team power level, you can carry underleveled players quite easily while still not having a total walk in the park. 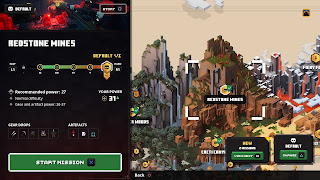 Minecraft Dungeons is not without it's flaws, which includes getting "stuck" despite having nothing in your way, audio dropping out unexpectedly, and little incentive to play above your power level. The loading screens on PS4 are also a bit long considering how small the levels are and how much is not randomized. I have yet to complete the game's default difficulty due to using different characters for solo and co-op play but as soon as I am able to get further into the game I will have a more in depth review of the game. So, have any of you bought and played Minecraft Dungeons? If so, what do you think of the game so far?