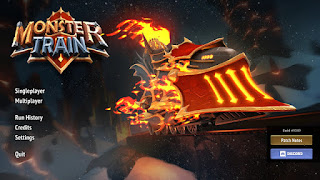 Monster Train is a strategic, deck building, roguelike game by developer Shiny Shoe and released on PC via Steam on 5/21/2020. Monster Train also has an official website. The game takes place aboard the Boneshaker, a train carrying the last remnants of hell. Powering their train is the last remaining shard of the Pyre, which kept Hell from freezing over. Heaven destroyed the pyre and will stop at nothing to ensure the pyre is never lit again. The Boneshaker travels alone on the dimension between heaven and hell on a voyage to reignite the pyre and save Hell.

At the start of the game, you select one of five clans to be your primary clan. This determines your champion and the type of cards you will receive at the end of battles as loot, as well as your starting cards. You also select an allied clan which adds another set of cards you can earn at the end of battles, as well as some of your starting cards. 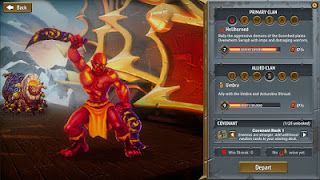 The Hellhorned
A clan that prioritizes raw damage over all else. The units have high damage and health and their abilities are more offense focused. Their spells rely on buffing their allies’ attack and armor. 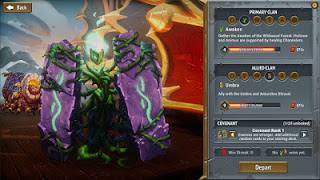 The Awoken
A clan that prioritizes defense and healing. The units tend to have more supportive effects and their spells rely on healing allies and giving them positive enhancements. 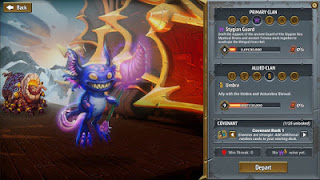 The Stygian Guard
A clan that prioritizes the use of spells. The units are weak and do low damage, however, their effects are potent. The spells do high damage and apply negative effects to enemies. 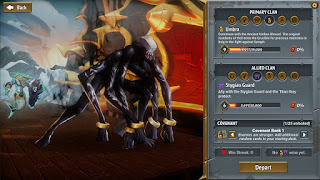 The Umbra
A clan that revolves around a unique feature. Certain cards will allow you to gain creatures called “Morsels”. At the end of the turn, they are eaten by the unit in the front and grant a bonus depending on the type of morsel they are. Certain units have an ability called “Gorge” which triggers a special effect whenever they eat a morsel. If given a steady supply of morsels the monsters in this clan can very easily go toe to toe with even the hardest bosses. The spells revolve around Morsels and the effects they give. 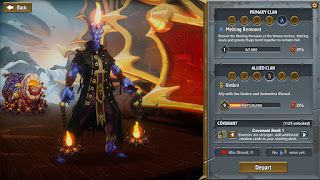 The Melting Remnant
A clan of melting wax figures. The Units have effects surrounding their death or the death of other units. Their spells rely on keeping their units from melting and resurrecting fallen units, or dealing damage that is tied to the number of dead friendly units.

The game is a roguelike, so each run will be different from the other. What shops and events are on the map, what cards you get, what artifacts you get, or even who is the final boss is all determined randomly. Because of this no two runs will be the same and it gives the game has extended replayability. 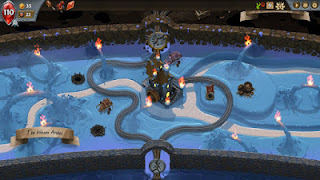 Each run is broken up into 8 sections, in each section, there are shops to upgrade units and spells or buy artifacts, hellvents to duplicate cards with, dark forges to upgrade your champion, unstable vortexes to throw away unwanted cards, Pyre health, Gold, or Caverns where a random event gives you an item, service or card to help you on your quest.  At the end of the section, there is a battle that must be cleared before moving on. 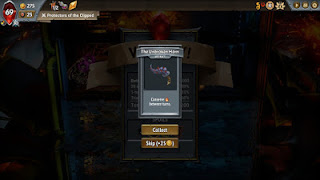 Artifacts are items that can be found, bought, or looted at the end of battles. There are 90 artifacts in the game with unique effects that can entirely change your playstyle. 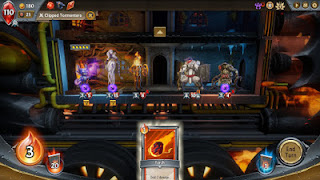 The gameplay of Monster Train is a cross between a tower defense game and a trading card game, each turn you draw a hand and are given a certain amount of Ember which is used to play spells and units. Enemy units will attempt to climb your train to destroy the Pyre, but they have to climb 3 floors. Each floor has a capacity limit which is indicated by the circles in the top left corner of the floor. Unit cards have circles on the top which display how much capacity they take to summon. Once a room is full you cannot play any units until sufficient space is clear. Each card has 2 stats, attack, and health. The attack shows how much damage will be done to an enemy, and the health shows how much damage can be taken before a unit dies. 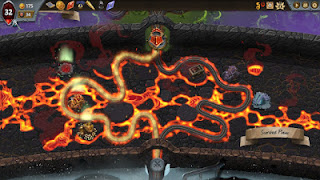 If enemies cannot be stopped by the 3rd floor they will proceed to the Pyre room, where they will attack it until the Pyre is destroyed, or the Pyre kills them. The Pyre has a limited amount of life that can only be restored by finding Pyre shards or using the effects of certain cards. 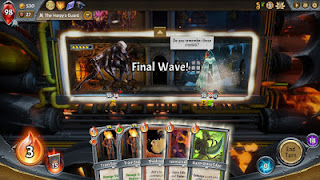 Each battle has a boss at the end, who unlike other enemy units, will not move up a floor until all friendly units on its floor are dead. Certain levels have more powerful bosses, who are present throughout the fight assisting the enemy units until the end where it enters the train like a regular boss.

The graphics of the game are stylish and detailed, with excellent character and monster designs, as well as unique graphics for the spells and artifacts. The music in the game is also excellent, with an impressive and diverse soundtrack that matches the tone of the game and the bosses they are tied with.

Final Verdict: Recommended
An amazing roguelike experience that has hundreds if not thousands of hours of replayability, and fun and often overpowered builds and combos to go with them. The excitement of finding new and interesting combinations with the cards and clans keeps you coming back for more to see what builds you can come up with on your next run. Monster Train is more than worth its price tag of 25 dollars with hundreds of hours of replayability, and 25 levels of difficulty to keep the game fresh for quite some time. I highly recommend this game to anyone that likes roguelikes, and even if you arent into roguelikes this game is an excellent introduction into the genre.