Atlus' latest title, Persona 5 Scramble: The Phantom Strikers, is an Action/RPG title co-developed by P-Studio and Omega Force. While P-Studio has developed the past three Persona titles, Omega Force is best known for the Dynasty Warriors (Musou) series and spin-off titles related to it.

The mystery of this game comes from its initial showcase and what it eventually became. Originally showcased as another Musou game, Persona 5 Scramble may be a bit more in-depth than your standard Warriors button-mashing title.

Is This a Sequel?
In the trailer, you will find several allusions to it being a sequel. The first is a stylized "P52" logo that switches to a "P5S" one. Another allusion comes from the game's release date of 02/20/2020 and the Japanese marketing behind the date.

All evidence seems to indicate that Persona 5 Scramble: The Phantom Strikers is considered a direct sequel to Persona 5. Furthermore, the story itself takes place half-a-year after Persona 5 and it will follow much of the same storyline structure as the original title.

Note that the concept of writing a storyline sequel, while using other genres or spin-off titles, isn't exclusive to Atlus. In 2004, Square-Enix released Kingdom Hearts: Chain of Memories for Game Boy Advance. Much like Persona 5 Scramble, it served to further its predecessor's storyline while the fundamental gameplay structure changed drastically.

Chain of Memories continued the story leftover from Kingdom Hearts. However, it lacked the significant polish or production values that made the first game such a grand hit. Plus the deviation in gameplay set it apart from the numbered titles. Plus, with Kingdom Hearts II's release, it recapped much of Chain of Memories' events. As such, it wasn't a must-play title, but more of a compliment to them.

Atlus' History of Spin-Offs in Other Genres
Persona 5 Scramble: The Phantom Strikers will not be the first time Atlus has written a storyline sequel into another genre. Persona 4 Arena/Ultimax follow the stories started from Persona 3 and 4. Co-developed by Arc Systems Works and Atlus' P-Studio, these anime fighting games narrate what happened to the characters after their original games.

Persona Q and Persona Q2 also feature the characters from the series universe. While also developed by Atlus, they're dungeon-crawler JRPGs. However, these spin-offs do not further the series' narrative.

Additionally, Atlus put their own touch onto the rhythm genre as well. They've released "Dancing" games for all three of the recent Persona games. While they're not intertwined into the narrative at all, they take many of their cues, such as characters, portraits, models, music, and writing from their respective games. In other words, they compliment the mainline titles. 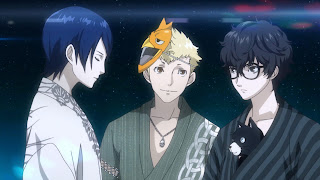 Musou or Not Musou?
Omega Force, developers of the Warriors (Musou) series, have created spin-offs for decades. They've delved into anime licenses, like One Piece, Fist of the North Star, and Berserk. Notably, they've also developed Hyrule Warriors and Fire Emblem Warriors, which come from Nintendo's franchises. Both games received praise for their gorgeous art style, character designs, remixes of classic themes, and some wonderful throwbacks to their respective series.

However, Musou titles are also known for their unvaried simplicity. Sometimes known as button mashers, much of the games follow an simple formula of beating up hordes of enemies ad nauseum. Musou games often don't vary the enemy types greatly nor do they add much strategy to defeating them.

Since P-Studio is co-developing the game, however, perhaps this means it will use more than just aesthetic cues taken from the host title. You can find some more detail on how much Persona 5 Scramble differentiates from other Musou titles here. If you're interested, check out this gameplay clip embedded below.

Judging by the gameplay, Persona 5 Scramble's battle gameplay will feel like your standard Musou title. However, it will be augmented with Persona 5's gorgeous UI, animation, stylish characters, and fantastic music. I can't say I've ever been a fan of Musou titles for more than a passing playthrough of Hyrule Warriors. However, I find Persona 5 to be one of the greatest games of all time.

With that said, I don't expect Persona 5 Scramble to really "live up" as a sequel in anything more than storyline. It feels more like a direct-to-video sequel as opposed to another major theatrical release. While we can't judge the game on more than what we've seen so far, we do know it will contain much of our beloved Persona 5 elements.

I feel Persona 5 set itself apart, from other JRPGs, thanks to its illustrious dungeon design, battle system depth, writing, and social activities. Its relevance to modern-day social issues, character designs, and overall polish helped it become one of the most beloved and successful games of our current generation. You could very well call Persona 5 an example of lightning in a bottle for its cultural relevance and how quickly it gained popularity in the gaming world.

Meanwhile, Persona 5 Scramble: The Phantom Strikers is more like the dessert piece that accompanies it. You may not need it, but you may also desire it if you seek more to the storyline. It likely won't be the must-play that Persona 5 or Persona 5 Royal were. However, if you enjoy Action/RPGs and want to know what happens next, then this game will likely be right up your alley. Personally, I'm interested in seeing more and wondering how much more it will deviate from standard Musou titles.

While the game is already out in Japan on PlayStation 4 and Nintendo Switch, Atlus has yet to update us with a western release. We will keep you posted. Follow our social media channels below to receive more updates on games including Persona 5 Scramble.

What appeals to you most in Persona 5 Scramble? Let us know in the replies!