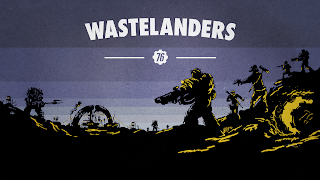 Bethesda has unveiled Fallout 76's 2020 roadmap and it looks like they're hopping on the season pass band wagon. There's a brand spanking new storyline featuring the Brotherhood of Steel. They will rebalance combat to make it easier for players to team up with those at different levels from their own. I believe this will make it easier to pull in new people if they can fight alongside there friends who have already been playing for a while.

Bethesda is quoted on their website as saying, "This is our own take on a 'Season Pass' style system designed specifically for Fallout 76," but it doesn't do too much different. You earn points known as S.C.O.R.E. to move along a single progression path, presented as a Fallout themed board game, and unlock things.

The first "Season" (starting this Summer) will be free for everyone. You'll spend your time during the season working through challenges, ranking up, and competing in public events. It will take about an hour or 2 to rank up, with a 100 ranks to work through. Bethesda says there will be 4 seasons each year with each one lasting around 10 weeks. In between each season will be some down time as Bethesd gets the next season ready, which will allow new players a nice chance to hop into the game without missing out on a full season of rewards. You can skip every rank for 150 atoms each but only after the first 2 weeks.

Bethesda is is trying to entice new players to try Fallout 76 with a week of free play that ends May 18 and goes across all platforms.

There will be another feature which debuts later this year that will help friends play the game together, One Wasteland for All! This new and improved enemy scaling and loot balance system will allow new players and Fallout 76 veterans to explore the wasteland together without worrying that high level enemies will kick the ass of noobs too fast or that vets will have to settle for low level loot. According to Bethesda, loot will scale to each player individually but they have yet to go into detail how enemy levels will work exactly. Whether its works out or not only time will tell.

Bethesda is also adding a new Brotherhood of Steel quest line that I am sure will will be worth the wait and enough to entice people to give Fallout 76 a try. Seasons will arrive with Update 20 this summer, along with new high level perks, public teams and a new boss event.