Posted by Rango on May 20, 2020
Earlier this week, voice actor Joe Zieja issued an apology tweet over remarks made regarding a major character in Fire Emblem: Three Houses. Joe Zieja, if you didn't know, is the voice of Claude who is one of the three major protagonists in the game. The other two lords of Three Houses are Dimitri and Edelgard. This "controversy" stems from a growing problem within the Fire Emblem fanbase that involves the character Edelgard. Please note that there will be major Fire Emblem: Three Houses spoilers below.

Who is Edelgard?
Edelgard von Hresvelg is the princess of the Adrestian Empire. During the first arc of the game, she behaves as one of your proper students. In the Black Eagles route, during Support conversations, she will share the story of her tragic upbringing and that she's seeking ambition. However, in the other two routes, she functions as nothing more than just another one of the NPCs.

Near the end of the first arc, the game's antagonist, Flame Emperor, is revealed to be none other than Edelgard herself. The Flame Emperor allied with a mysterious group, Those Who Slither in the Dark, who were responsible for the kidnapping of Flayn, the disappearance of students, and even the death of Byleth's father, Jeralt. In the Blue Lions route, Dimitri confides in Byleth that he knew Edelgard as a childhood friend. Once she reveals herself, however, he completely snaps and begins attacking enemy soldiers, killing them violently.

Shortly afterwards, Edelgard declares war on the church. She succeeds the Emperor's throne and prepares for an attack on Garreg Mach Monastery. This precedes the 5-year time skip.

The second arc of the Blue Lions route focuses extensively on Dimitri's quest for revenge against Edelgard. As such, Edelgard becomes the major antagonist of the game. Meanwhile, the Golden Deer route (Claude) features Edelgard as an antagonist, but not as the final enemy.

In the Crimson Flower route, Edelgard is set to be your ally. However, given the right circumstances, you can choose to refuse her request to ally yourself with her. In doing so, you will enter the "Silver Snow" or Church route, allying with the Church against Edelgard and her forces. In other words, Edelgard is the primary antagonist in three out of the four possible routes. She serves the hostile emperor role akin to Hardin (Fire Emblem: Mystery of the Emblem) and Zephiel (Fire Emblem: The Binding Blade).

Why Do People Hate Edelgard
In the case of the aforementioned emperors, they were established villains near the beginning of the game. Edelgard, however, was a friendly character at first. While she turned traitor against the church, the weight of her actions bore heaviest when playing through the Blue Lions route.

People despise Edelgard for her heartless betrayal. She was willing to sacrifice her friends and the trust of everyone in order to accomplish her selfish goals. She had a horrible past and, as such, sought to enact her own vengeance against the continent in order to shape the world in her image. Even at the end of the Blue Lions route, when she is truly defeated and Dimitri extends his hand to hers, she attempts to kill him one final time.

At the end of the day, Edelgard single-handedly started a war across the Fodlan continent. She was indirectly responsible for the death of Byleth's father and blatantly lied about knowing about the enemy's actions as well. She's committed the most bloodshed out of any of the major characters all to fulfill her ambitions.

Why Do People Sympathize With Edelgard?
Despite her actions, Edelgard truly signifies the a tragic villain. She sought to carve her own path at the expense of others. However, she also bore her heart to Byleth and explained what she wanted to change. She viewed the church as her enemy and felt sorrow in her actions. People related to her oppression and her stance to tear down the leadership and build a new one from scratch.

The subject of Edelgard's hatred has become a primary source of debate among the Fire Emblem community. These arguments have spread largely across Twitter, but involved threads on Reddit and SerenesForest as well. Of course, Edelgard is both incredibly popular among her fans, as well as by Nintendo. Hence, the developers chose her as the latest Legendary Hero, over Claude and Dimitri, in Fire Emblem Heroes.

How Edelgard Impacted the Fire Emblem Community
Through social media, people have expressed their hatred towards the character. They deem her as a liar, a traitor, and someone willing to sacrifice the trust of their loved ones. She's seen as a despot and the catalyst that started a war, forcing Byleth and other House members to strike down former students.

As opposed to your typical villain, Edelgard was still a major protagonist in the game and was cleverly inserted as one of the "three heroes" of the game. Developer Intelligent Systems cleverly hid her facade until late in the first half of the game. Fans who played through the Black Eagles route saw her as an example of how to overthrow an oppressive hierarchy.

This past week, Joe Zieja apologized for comments he made regarding Edelgard. This came from facing backlash from the Adrestian Emperor's fans. This resulted in the aforementioned apology tweet. 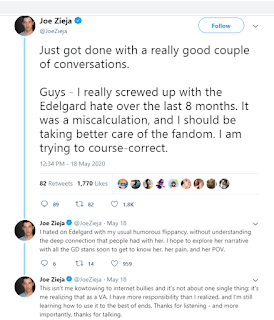 Despite what some social media viewers see as transgressions, many of Mr. Zieja's fans are standing up for him in the thread. They believe he was not in the wrong for his words and have rallied to his support. Many also believe that members of the community take the love of a fictional character too far into real life. Despite this, Mr. Zieja has chosen to handle this matter delicately. 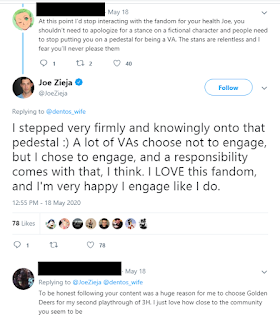 On that note, please remember to be kind to the voice actors and support their work.

Final Thoughts
Perhaps the single most pressing thing Nintendo could have never predicted, however, was that a single character would become this divisive. Whether in the game's story, or in real life, Edelgard succeeded in creating war and dividing the Fire Emblem fanbase in two.

How do you feel about Edelgard or the controversy that comes regarding the character? Let us know in the comments below.