Resident Evil 3 was released in 2020 for PlayStation 4, Xbox One, and PC. Developed and published by Capcom, it serves as a remake of the 1999 title originally released for PlayStation. M-Two was also involved in the game's development. You can download the demo for free online if you wish to try it before you buy it. The game can be purchased at most retailers for $59.99

In Resident Evil 3, you'll play as Jill Valentine as she tries to escape Raccoon City's zombie apocalypse. As the T-Virus infects countless citizens, she must survive while evacuating the city. The entire time, however, she will be stalked by a powerful Bio-Organic Weapon (B.O.W.) called Nemesis. Similar to the Tyrants of past titles, this hulking brute cannot be destroyed by conventional weaponry. 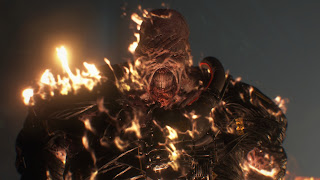 As Jill eludes the creature, she'll meet up with Umbrella Biohazard Countermeasure Service (U.B.C.S.) members who attempt to evacuate the city's survivors. Among them include Carlos Oliveira, the game's deuteragonist who assists Jill throughout the game. Resident Evil 3 will develop from an apocalyptic escape scenario to a conspiracy tale with ulterior motives and betrayal from survivors. 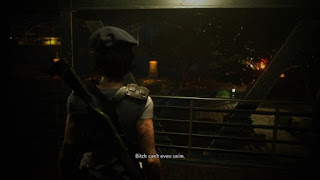 While you navigate Raccoon City, you'll solve puzzles and take down B.O.W.s. None of the puzzles ever feel quite as intricate as the ones in Resident Evil 2, but the combat feels much more involved this time. Instead of running around enclosed spaces, you'll fight zombies on the streets. One particular segment even features a sort of gauntlet where you're facing off an entire horde as you try to buy time for an operation.

However, as per survival horror rules, you'll want to keep your ammo stocked and use it only when needed. Also keep in mind that you can only select the difficulty at the beginning of the game. If you're opting for a harder challenge with less ammo, Hard Mode might be for you.

Resident Evil 3 brings back the dodge-step mechanic from the original release. Unlike the former, however, you can now use it any time and not just only as a reaction command. However, if you do use it as a reaction command, it will become an invincible roll when timed properly. This will become crucial as you'll need to learn it to dodge Nemesis' attacks, as he can run much faster than you. 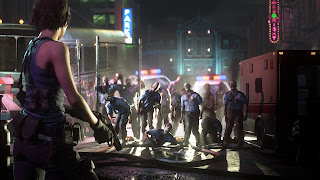 In terms of audiovisuals, this game is just as stunning as any previous game using the RE Engine. It sets a realistic, gritty visual while still being aesthetically pleasing. The highly detailed character models breathe new life into the game while the environments are dark, but navigable with minimal lighting. Every gory detail and bloodbath looks as grisly as you could imagine. Plus, the soundtrack offers fantastic atmosphere that suits the mood. In particular, the save room theme returns in this game as well. If you played Resident Evil 2 and didn't purchase the Classic soundtrack DLC, you didn't get a Save Room theme. However, Capcom has you covered this time.

Speaking of classics, you can also change Jill and Carlos' appearance to somewhat match their outfits from the original game. The "Classic Costume" packs are not 1 for 1 recreations of their actual classic outfits. While I prefer Jill's classic tube top and skort, I greatly prefer Carlos' new design. There's much more element to his design than there was before and it truly makes him stand out as a major supporting character. Fans of the original will also surely appreciate the redesigns of Mikhail and Nikolai as well.


One thing to keep in mind is that this is a full-blown re-imagining. While Resident Evil 2 was a remake, many of the locations and plot points stayed the same. Resident Evil 3, however, adds new areas, sequences, characters, and scenes. If you've played the original title and scratch your head trying to remember something in the remake, chances are it didn't happen. In other words, this title has completely reconstructed everything from the original to make this a complete retelling.

Compared to the original Resident Evil 3, I admit that I actually preferred the original release. I feel the direction they took with this game benefited heavily from the RE Engine and numerous upgrades. The clever dialogue, epic cutscenes, and cinematography look nothing short of amazing. However, among quality-of-life improvements over its predecessors, the original RE3 added the Live Selection mechanic. This was a QTE-based choice that would determine what would happen next. Unfortunately, this key element was stripped from the remake. 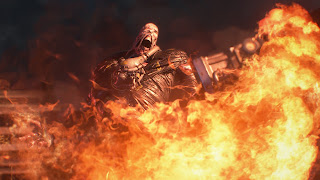 Moreover, Nemesis was honestly more terrifying in this version. In the remake, he appears as a scripted boss or escape section. But in the original, he would appear out of nowhere, very close to you, forcing you to make a quick decision or get slaughtered on the way.

When you compare it to the Resident Evil 2 remake, Tyrant was more terrifying because of his psychological horror value. He was constantly stalking you through the game, adding an unparalleled sense of fear not seen in games of its kind because you didn't know where he would strike next. Resident Evil 2's remake also offered a longer game largely due to the incentive to play two scenarios and uncover the full story. Plus it offers various mini-game challenges to add more activities. 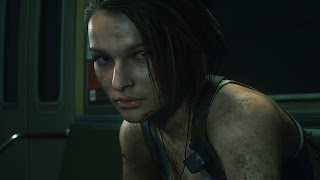 Resident Evil 3's new Resistance mode feels disconnected from the main game's experience. Therefore, we won't cover it in this article. What the original game did have, however, was The Mercenaries. This score-attack based mode that would later become a prominent feature in Resident Evil 4. But scrapping features connected to the original game felt like an unnecessary sacrifice.

Stripping the game of The Mercenaries and Live Selection takes away from some of the original game's appeal. Plus, coming in at only 12 hours long with no alternate endings, you're honestly done after one playthrough. I feel RE2's remake was a grand improvement over the original. But I feel RE3's remake more or less compliments or succeeds it without replacing the original altogether.

Final Verdict: Recommended
If you're looking for a quality survival horror experience, Resident Evil 3 will be right up your alley. You'll engage in plenty of fantastic combat and plot points. If you're a veteran fan, you'll certainly appreciate the character redesigns and new segments featured in the game. It's a polished, quality title that's worth the playthrough if you want to challenge yourself in the apocalypse.


*All images courtesy of Capcom