My 4 favorite dragons in Nintendo's history

Posted by Rango on April 20, 2020
Dragons have appeared for nearly as long as Nintendo's gaming history has been around. These mythical beings became either your ally or your worst enemy. As much as I love dragons, I want to share my 4 favorites throughout Nintendo's history. This list will feature four of Nintendo's most prominent dragons spanning a history of over 30 years. 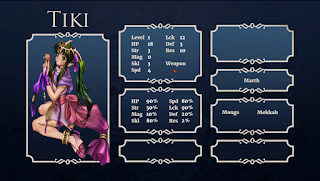 This adorable little dragon started off as Marth's companion in Fire Emblem: Shadow Dragon. Being rescued from the dark priest, Gharnef's, control, she joined Marth's army to help save his home of Archanea. She quickly grew attached to her savior and even nicknamed him "Mar-Mar." Both in Shadow Dragon and its sequel, Mystery of the Emblem, Tiki aided Marth in defeating the Earth Dragon, Medeus.

Over 20 years later, Nintendo would release Fire Emblem: Awakening for Nintendo 3DS. Tiki, now matured into a beautiful young woman, would appear over 2,000 years after the Archanea Saga. Awakening from a long slumber, she discovers Chrom and Lucina, descendants of her beloved friend, and joins their army to save their homeland, Ylisse. 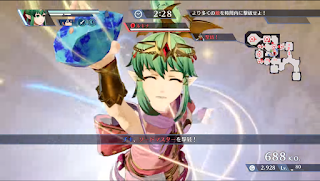 In Awakening, the player could bond with Tiki via Support conversations. As Male Robin (protagonist), Tiki becomes one of the Support options. She could even marry him and mother his child, Morgan, who would gain Manakete abilities.

In the Future Past DLC, this dark tale told of the death of many of Lucina's allies as Grima took over the world. Among the slain includes Tiki. And with the destruction of a sacred mountain, Lucina could not awaken her sword, Falchion. But thanks to the intervention of Chrom and the Shepherds, Grima could be stopped.

By Tiki's death, she succeeded her mother, Naga's, place as the Divine Dragon, blessing Falchion, and giving Lucina the weapon needed to end Grima once and for all. Tiki's ascension into a sort of goddesshood became  prominent as it helped culminate into a climactic scene in one of Fire Emblem's best storylines. 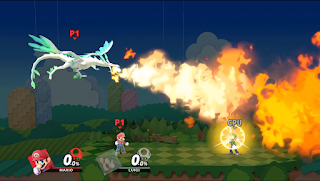 While dragons in Fire Emblem have played a part as both ally and enemy, Tiki herself has appeared in many installments, including the spin-offs, Tokyo Mirage Sessions #FE and Fire Emblem Warriors. Both as a child and adult, she appears in the mobile title, Fire Emblem Heroes. Finally, in Super Smash Bros. Ultimate, Tiki made her debut as an Assist Trophy, using her breath attack to stave off opponents for good. 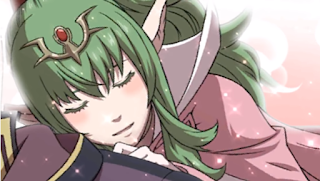 Fire Emblem features many dragons, but Tiki has stolen my heart for years. 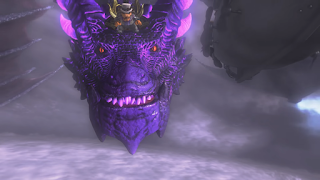 When Nintendo created the Ruined Kingdom, in Super Mario Odyssey, they channeled their inner Dark Souls to create a destroyed castle. When Bowser appears, he's seen riding a realistic looking dragon which is something you would never expect to see in a Mario game. After Mario's Odyssey ship gets sent sailing into the kingdom, Bowser sets off to escape. When you reach the top of the Ruined Kingdom, you'll fight the Ruined Dragon.

I love the Ruined Dragon because his appearance stands out among the rest of Mario Odyssey's colorful, vibrant aesthetics. As a huge fan of fantasy, I loved the entire realm's design. But this boss design particularly spoke to me. He's more than just one of the many standout landmarks created in Mario Odyssey - he's also entirely relatable after you beat him. 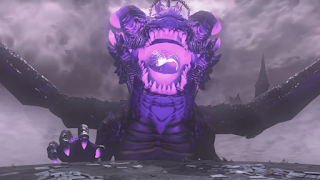 You can learn more about the Ruined Kingdom from the Mario Wiki. It includes information from the in-game brochure! 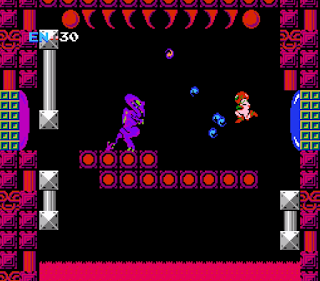 The space pirate dragon's history dates back to when series protagonist, Samus Aran, was but a small child living on an Earth colony. Ridley destroyed the colony, killing Samus' parents in the process. The orphaned girl would train under the Chozo race, the bird-like people that turned Samus into a warrior and donned her with her Power Suit. After Samus enlisted with the Galactic Federation, she would encounter Ridley, defeating him on Planet Zebes.

But that would only be their first of many encounters. Since then, Ridley has appeared as a staple boss in nearly every Metroid game. The monster would continue hunting Samus using a combination of fire breath, physical strikes, and even missile launchers. Sometimes, he would fight you more than once in the same game. 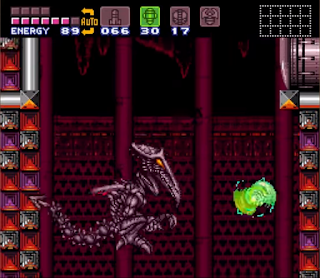 The undying specimen made its latest appearance in 2017's Metroid: Samus Returns for 3DS. Despite being a re-imagining of Metroid II: Samus Returns, for Game Boy, Ridley did not appear in the original game. Rather, he appeared as the surprise final boss of the remake, fighting Samus in three different forms. This would also be Ridley's first appearance as a Metroid title's final boss.

Ridley has also appeared in every incarnation of Super Smash Bros. In the N64 title, he was a background character on Planet Zebes. In Melee, he appeared fighting Samus in the opening. In Brawl, he was a boss you fought twice in the Subspace Emissary Mode. In Smash 4, he appears as a boss-turned-ally character in the Pyrosphere stage. 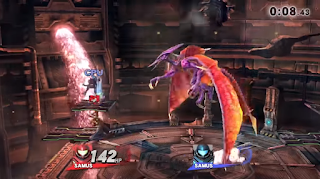 Finally, after years of begging, and even despite Smash creator Masahiro Sakurai's initial reluctance, fans finally got to see Ridley debut as a playable character in Super Smash Bros. Ultimate, in 2018, for Nintendo Switch. The character boasts exceptional range and KO power off several of his moves.


What makes Ridley likable is that he's the boss you love to hate. He won't stay dead and is always coming back for more. In each game, he gains new attacks to keep things fresh. Plus he has some of the hardest hitting boss music in gaming history. No matter how many times he comes back, I'm always looking forward to fighting Ridley.

Everyone who's played Pokemon knows of Charizard. Not only is he recognizable as the final evolution of Charmander, one of the three starter Pokemon of the original game. Nintendo and Game Freak have kept Charizard alive through generations of Pokemon games, either as an opposing Trainer's Pokemon, a Pokemon you could catch, or even by evolving it in various ways. 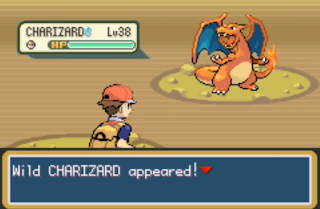 The Flame Pokemon is dubbed a Fire/Flying type. Surprising that it's not a Dragon even though it can learn moves like Dragon Rage and literally looks like a Dragon. Similarly to Charizard, Gyarados also suffers from identity crisis, appearing as a dragon but not in terms of type.

However, Generation VI finally gave Charizard his wings, so to speak, as Mega Evolutions debuted in the series. The Charizardite X gave the Pokemon the ability to transform into Mega Charizard X, now a Fire/Dragon type. Anyone concerned that he would never be "one of the dragons" finally got to see his true power blossom. In Super Smash Bros. for Nintendo 3DS and Wii U (Smash 4), Charizard also gained the ability to evolve into Mega Charizard X via the Smash Ball. 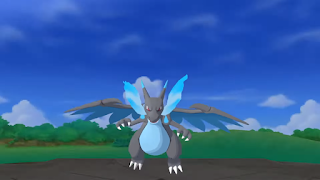 Charizard would continue being a prominent character in the Pokemon series. Even in the latest titles, Pokemon Sword and Shield, he obtains a new form: Gigantamax Charizard. While not a Dragon type, he grows many times his size to do battle.

Much like Ridley, Charizard has appeared in every Smash title. In both SSB64 and Melee, he appeared from the Poke Ball item, using Flamethrower to attack opponents. In Brawl, however, he became a playable character, alongside Squirtle and Ivysaur, as part of Pokemon Trainer's lineup. In Smash 4, he would fly solo, being a standalone character. But in Ultimate, he would return to Pokemon Trainer's lineup to team up with his allies once more. If you love Charizard, read more about its Pokedex entries and data here!

Nintendo has featured many dragons throughout these respective series and then some. But I wanted to pick four of the most recognizable favorites out of this small batch. We could discuss favorite Nintendo dragons for hours when you consider how many they are. But I think it best we leave it at this for now!

Who is your favorite dragon in Nintendo lore? Let us know in the comments below!

Press Release: Wolfstride Is Out on PC

OTA IMON & Raw Fury’s Anime-inspired Narrative Mecha RPG  Wolfstride  Is Out on PC Brazilian indie collective OTA IMON Studios and publisher Raw Fury have released  Wolfstride , the retina-melting, black-and-white, narrative mecha RPG, on Steam for $14.99. Wolfstride  is a role-playing game about three former partners-in-crime arriving at a turning point in their lives. When they inherit a junkyard mecha called Cowboy, they reunite to enter the planet’s most elite mecha competition: the Ultimate Golden God Tournament. With each member lending their unique abilities to the team – dog-mechanic Duque, mecha pilot Knife Leopard, and jack-of-all-trades Dominique Shade – they’ll have to take on and outwit the best mecha opponents in turn-based combat. What begins as a simple mission to make money gradually unfolds into a deep, slow-burning exploration of their complex lives, the dark choices of their past, and their inevitable fate with the future of the world hanging in the balance! Wol

MR. DRILLER™ DRILLLAND™ ANNOUNCES ITS GROUNDBREAKING RELEASE FOR PLAYSTATION AND XBOX CONSOLES ON NOVEMBER 4 Action-Puzzler Makes its Debut on PlayStation 4, PlayStation 5, Xbox One and Xbox Series X|S with Updated Graphics, Gameplay, and HD Cutscenes SANTA CLARA, Calif., (November 1, 2021) - Leading interactive entertainment developer and publisher, BANDAI NAMCO Entertainment America Inc. today announced that Mr. DRILLER™ DrillLand™ will be available in the Americas on PlayStation 4, PlayStation 5, Xbox One, and on the Xbox Series X|S as a digital release on November 4. Marking its arrival on next-gen consoles, Mr. DRILLER DrillLand is an action-puzzle game that challenges players to “drill” their way to the bottom of the screen by destroying colorful blocks in the game field, creating combos of colorful chain reactions and avoiding enemies all the while. The new release delivers new updates to its graphics, gameplay, and HD cutscenes. Mr. DRILLER DrillLand is also available on the Ni