While I originally beat it for Wii U some years back, I felt compelled to grab the Switch version as well and I recently completed the main adventure of New Super Mario Bros. U Deluxe. As a huge fan of Mario games, I couldn't pass up an excuse to buy it the second time. Featuring a few new additions and some changes, I don't think anything really stuck out as a great reason to pick up this version. However, my girlfriend adores Peach and fell in love with the Peachette design. Wanting to play it with her, I decided to get it so we could play the co-op together. 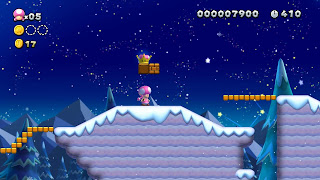 New Super Mario Bros. U starts off as anyone might guess. Mario and friends sit at a table with Peach when Bowser's airship comes crashing in. He grabs Peach, knocks away Mario, and so Mario must go after and rescue her once more. With that said, onward to the adventure.

The platforming title brings about some of the best of 2D Mario gameplay. As the 4th title of the New Super Mario Bros. subseries, this one culminates with the best of the past games into one title. For instance, 4-player co-op returns from New Super Mario Bros. Wii. But what makes this one stand out is its level of challenge. Its creative level designs bring more challenge and creativity to the table than the past three entries. Even compared to the NES and SNES Mario titles, this stands out among the most challenging games in the series. It's no Lost Levels, but it certainly packs a punch. 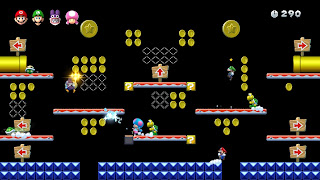 You'll have plenty of variety among stages when you're hunting down P-Blocks, avoiding walls collapsing on you, or flying around on mobile platforms. You'll play through a variety of stages, such as water, ice, lava, and sky stages. However, I will say that hunting for Star Coins quickly becomes a pain in the Ghost Houses. Unless you're using a guide, their maze-like level designs force trial-and-error when navigating, which becomes more annoying than enjoyable.

New Super Mario Bros. U introduces the Flying Squirrel suit. Much like the Cape and Raccoon suits of past games, this allows Mario the ability to float briefly. Additionally, you can do an air hop and cling to walls. NSMBU also brings Yoshi back as well as Baby Yoshis, the latter which you can take with you to other stages! 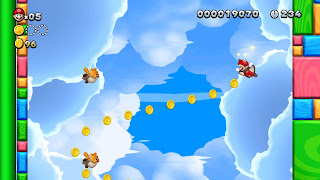 While you can select Luigi or Toads in the original game, new characters to Deluxe include Toadette and Nabbit. Toadette can transform into Peachette, who can float and double-jump, and Nabbit is largely invincible. Both characters add an easier mode for a relatively challenging game.

The game's aesthetic reuses assets from previous NSMB titles. The entire thematic revolves around much of the same music and visual style. Perhaps the most striking differences, however, are that it's in HD. Due to this, the backgrounds look more beautiful than ever before, even when wearing nostalgia goggles. You'll hear plenty of Mario remixes including the Super Mario Bros. 3 boss theme when you fight Boom-Boom in a fortress. It's a solid throwback, but one we've heard before with the same remix. It does little else to push the aesthetic forward. But some of the backgrounds, such as the ice stages or the Van Gogh-themed ones, look especially pretty. 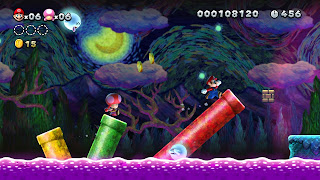 As far as extra content goes, you can unlock Superstar Road when you collect all the Star Coins from each world. These are more challenging than the normal stages. You can also play the aforementioned New Super Luigi U mode right off the bat. This mode includes rearranged stages with an even harder challenge. Plus all stages are limited by a much shorter time limit. You can also play several modes such as Boost Rush and Coin Battle. Unfortunately, the last two extras don't inspire much replayability. As far as extra content goes, nothing will come close to the mini-game variety of New Super Mario Bros. for DS.

I have very few issues with New Super Mario Bros. U Deluxe. However, I wouldn't say it's a flawless game either. If you've already beaten the Wii U version, I would honestly say it's not worth getting again. The main reason I say this is because it adds little despite being labeled a "Deluxe" edition. Compared to Mario Kart 8 Deluxe, I would say the latter is by far the most substantial Wii U to Switch port. This includes DKC Tropical Freeze, Bayonetta 2, and other ports as well. The number additions MK8 Deluxe received helped rebalance the competitive meta and reinvent the game we were playing. 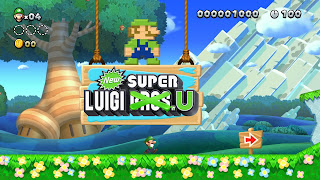 But perhaps the single biggest impact of Mario Kart 8 Deluxe was the return of Battle Mode. Sorely missing from Mario Kart 8 on Wii U, this opened up several new stages and game modes which could be played both offline and online. Mario Kart 8 Deluxe just an updated release, but a major upgrade. In addition to the visual upgrade, the additional balance and modes made a Mario Kart 8 worth purchasing again.

New Super Mario Bros. U, as well as most Wii U to Switch ports, don't have nearly as much depth to their updated re-releases. They're 1080p 60 FPS updates of already great titles. But they didn't add anything substantial to warrant buying again.

While NSMBU is the best of its sub-series, it still falls below being a top-notch hit. It lacks the innovation or appeal of Super Mario Bros. 3, Super Mario World, or even Super Mario 3D World. NSMBU largely recycles the resources used in past NSMB titles, such as the music, models, and mechanics. While reusing aesthetics or engines isn't a bad thing, NSMBU does little else to stand out and push the formula creatively. What it does, however, is reinforces what already makes 2D Mario great. If you never owned a Wii U, or you sold it, I recommend this game. If you own a Wii U or have beaten NSMBU before, then I would recommend other 2D platformers instead. You could find more exciting and creative choices from Rayman Legends or Kirby: Star Allies.

Final Verdict: Recommended
If you like Mario and you didn't play this the first time around, then it's worth adding to your collection. You can never go wrong with Mario in the first place. Plus, New Super Mario Bros. U Deluxe brings some of the platforming action of 2D Mario challenge to your Nintendo Switch!