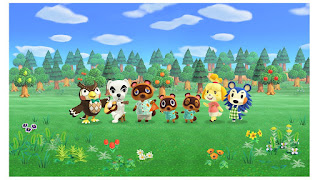 {Before I start this article, let me just say thanks to Saved You A Click, the hardest working account on Twitter and the one who alerted me to this story.}

If you are a fan of video games you probably know all about the phenomenon that is Animal Crossing: New Horizons. Having sold 1.88 Million physical copies at launch in Japan, it has sold better than any Switch game in that, and several other, region. With so many people playing the game it was only a matter of time before someone tried to farm clicks off hating the game. In a shock move, Business Insider stepped up to the plate to hit the anti-Animal Crossing home run article. In an opinion piece titled 'It's time to admit 'Animal Crossing: New Horizons' is a dumb, boring game for children' "writer" Jack Crosbie tears into the Switch title.

Normally I wouldn't write an article about someone else's opinion. After all, everyone is entitle to think as they see fit even if they disagree with what you think. (Unless they hate The Princess Bride, those people should never be listened to.) So, why have I chose to write about this Business Insider article from Jack Crosbie? Simple, it was created to farm clicks not express an opinion. We almost never see people admit they are just grifting for clicks but Jack Crosbie admitted to it openly on Twitter.


"i'm ready to say it: animal crossing sucks. bad, lifeless game which is only fun if you put TONS of time into it or you're playing with friends, which is clunky and inconvenient, like most other aspects of the game. who will pay me to write this post i'll do it for cheap"

Now, you could dismiss this as a cheap joke. Jack just trying to take the piss if you will. However, he followed it up with this Tweet...

"i'm dead serious if you have $200-300 left in your freelance budget and you want a post that will probably get at least 10k hateviews if we put the right SEO hed on it i will do this for you in less than 800 words. bonus points if your billing department pays in <30 days ha ha ha"

And shortly afterward, Business Insider took Jack up on his offer and he crafted the hate bait article I linked earlier. Just to put a cherry on top of this crap sundae, Jack made a nice Tweet promoting his opinion piece saying..
"my first opinion essay for business insider takes you inside the business of nintendo selling you all on a big stupid game for babies. play stardew valley you gigantic infants"

This "article" by Jack Crosbie is has gems like "This is not a personal attack. I know and respect many people who love this stupid baby game." and "Also, Tom Nook is a capitalist overlord." Jack Crosbie was a contributing writer to Splinter News and now I know why the site was axed by G/O Media.

With many websites looking to cash in on the captive audience of quarantined readers, be on the look out for many more examples of articles created specifically to piss you off and make you hatefully read them. This is one of the main reasons this site exists; to get you all the facts and fact based opinions with none of the bullshit. Thanks for reading.